For six months now, fans of chef Andrew Carmellini and his Soho restaurant The Dutch have been waiting for the debut of his private dinner series Fresh Eggs in the restaurant's downstairs private dining room. Today, Carms announces the details.

On Tuesday, March 27 at 7:30 PM, he and chef Tien Ho, formerly of Dave Chang's Ma Peche, will serve a $200 a head, five-course dinner with wine pairings. The two worked together back at Cafe Boulud before Ho went on to the Momofuku empire, and it looks like they'll be collaborating on a series of American/Asian/Frenchie dishes like monkey bread with chili jam butter, kampachi with kaffir-apple relish, and fluke "Veronique" with grapes, pommes Parisienne, and charred leeks.

Seating is communal and reservations can be had by responding to the Fresh Eggs email that went out to those who signed up for the mailing list. 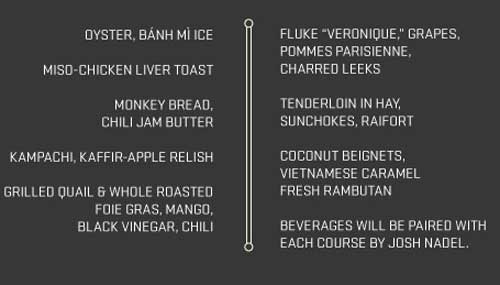