Tamer, Emelie, and Elise of Colonie in Brooklyn Heights

Share All sharing options for: Tamer, Emelie, and Elise of Colonie in Brooklyn Heights 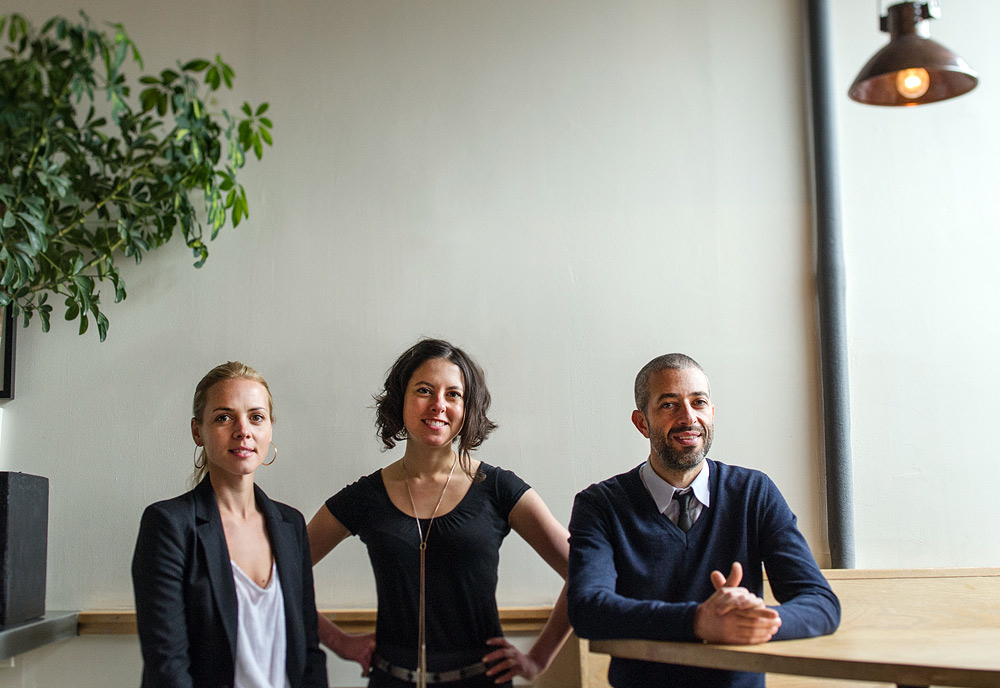 Colonie is the American bistro from first time restaurateurs Tamer Hamawi, Emelie Kihlstrom, and Elise Rosenberg. They wanted to open an every day restaurant in Brooklyn Heights, a neighborhood that was starved for good eats. The locals immediately flocked to Colonie when it opened last February, and the restaurant gained a whole new clientele after it received an unexpected one-star review from the New York Times in May. Right now, Elise, Tamer, and Emelie are planning two new projects in Dumbo with their chef, Per Se and Noma vet Brad McDonald. We recently spoke with all four members of the Colonie team about how the restaurant came together, and what they've got planned next.

When was the first time you talked about opening your own place? Tamer Hamawi, owner: Probably about five or six years ago. I used to live in Brooklyn Heights, and Emelie still lives in Brooklyn Heights. We would sit in our apartments lamenting the food scene in the neighborhood. For years, we talked about doing something, but I guess it really started to come to fruition midway through 2010. We all started at Public. Emelie was one of the original staff members, I arrived two months later, and Elise came two months after that.

Did you have a particular concept in mind? Elise Rosenberg, owner: It's funny, the original concept was to have a little wine bar and to have some cheese and some panini — just a super simple place where any of us on any night could go back behind the grill and make those salads. We were looking around at these small little spaces, and none of them were quite right. And then one day Tamer and I were riding around on his scooter and we found this spot, and it was just so beautiful with the high ceilings and all the natural elements — just this amazing open, airy space.

Tell us about your experience using the micro-financing site Kickstarter. Elise: It was very new at the time. We read an article in the New York Times in May or June, and it's funny because Emelie and I both came to a meeting with the article, and we got really excited to raise money that way. But it was less about raising money and more about marketing. Tamer: Spreading the word, yeah. We had butcher paper on the window during construction, but we had a little sign that said "Colonie restaurant, opening soon. Check out our video on Kickstarter." And that was really an awesome way for the neighborhood, who were all craving another quality dining option, to check it out online. We got a lot of donors from people in the neighborhood who we'd never met. Elise: It was cool because then we had a sort of instant clientele from the moment that we opened the doors, and they felt like they were a part of it. Tamer: We pretty much gave back what people donated in the form of food and wine once we opened — our rewards were really generous. But I think that what we didn't anticipate was how the story of a restaurant using Kickstarter would become such a media scoop. Elise: We were the first restaurant that they ever allowed on Kickstarter.

That's funny, because a lot of restaurants are raising money on Kickstarter these days. Tamer: They actually declined our application, initially. They claimed that Kickstarter is more about funding the creative arts, and that restaurants aren't really a creative art, and that it's not really geared towards funding direct business expenses. We'd been following Kickstarter for a few months at that point, and we were able to respond with an e-mail that listed other businesses using Kickstarter funds for expenses — in one case, a business asked for money to cover rent. And in terms of the creative arts side of it, we mentioned that we fully believed that restaurants are a creative art form — every night at six o'clock it's like curtain call; the restaurant is our theater; the open kitchen is our stage. And they loved all of that, and they wrote back saying, "It's that kind of enthusiasm that Kickstarter is all about. You're in."

How did you find the first chef, Alex Sorenson? Tamer: We'd worked with Alex at Public, and he happened to be available at the time we were looking for a chef. We did a tasting with him, and brought him on board.

Did people check it out when it opened? Elise: We opened our doors at six o'clock on a Friday night, and every seat was full by 6:45 PM. Emelie Kihlstrom, owner: We did about 200 covers that night. It was amazing. Tamer: And that's with no press or PR firm. We just wanted to open quietly and find our feet naturally, and have the word-of-mouth spread a little organically. But just because of the nature of the neighborhood, people were just desperate, starved for quality dining options, and they couldn't wait. Emelie: Yeah, if we were to do this over again, I think we wouldn't have opened up on a Friday night, and we would have done friends and family. It wasn't in our budget at the time.

You got a big review from Sam Sifton just a few months after opening. Did you know that was coming? Emelie: No, we were shitting our pants. We did spot him, but not every time. Tamer: I think that through the Kickstarter campaign, we were very much on the radar and it became a big story. Florence Fabricant was chasing us in the early stages for the opening article, and we were quite surprised by how aggressive she was, in a good way. So we knew that we were very much on the radar, and that we could possibly get reviewed, but it was still a surprise to get reviewed so early on. But we're so thankful that we were. It was incredible to get a Times review, and we started getting bookings from as far away as Beirut from that review.

The review noted some service hiccups. Did you make any changes after that? Elise: You know, it was still pretty early, and we were still in the process of tweaking all these things anyway. So we definitely used the feedback, but they didn't point out anything that we weren't aware of.

Brad McDonald came on as chef not too long after that. How did you find him? Emelie: It was funny because my good friend Anne had worked with Brad at Per Se a few years ago. And Brad had actually been in here a few times before starting. As Alex was leaving, I had a phone conversation with my friend, and she said, "You guys should definitely hook up." We met the following day, and we just hit it off. My little sister calls him our "Gandalf."

What happened with Alex? Elise: He was ready to move on. He wanted to open his own project, and I think it can be frustrating for a chef when you want to do your own thing and you're sort of working with the three people that hired you. But we totally wish him the best. He's just ready to do his own thing.

Brad what were you before this? Brad McDonald, chef: I had just come from a restaurant upstate, where I wasn't cooking the kind of food that I really wanted to be cooking. So, I had this sort of mind-opening experience about what it's like to work with other people, and I was determined that regardless of any hard hardheadedness that I have, I was going to work my best to be an integral part of the team. Right from the start, they'd already designed the menu, how it works, and the style of service. My focus was basically getting in here as smoothly as possible and making the ship run better, or as best as I thought it could.

Did the crowds keep coming throughout the summer? Brad: Wasn't August one of our best months? Tamer: We grew stronger and stronger, and a lot of that has to do with Brad coming on board when he did. He really did turn things around in the kitchen, and the staff was working a lot harder back there. But they were happier and they were motivated and inspired. They were learning, and it was exactly how it should be. But yeah, summer here was amazing — we didn't slow down at all.

What can you tell us about the two new projects, the American and the Mexican restaurants in Dumbo? Elise: We just broke ground, so things are going a little slow for sure. But yeah, it's exciting.

At what point did you start talking about doing two more restaurants? Brad: Basically, from my first meeting. The project in Dumbo was something where the wheels had been on the ground for a few months, and it was something that I was headed in the direction of doing myself, and then I was all in for both places.

What's the American place going to be like? Smaller than Colonie? Elise: Not that much smaller, about the same size — in our comfort zone. We're thinking it will open in early summer. Tamer: Yeah, early summer or end of spring.

What about the Mexican restaurant? Tamer: Same thing, end of spring. Elise: About the same size as well.