All throughout the rest of Bodega Week, we're going to be meeting the people that make the neighborhood bodegas of this city run. Right now: Basri Cingir, of Park West Cafe & Deli: 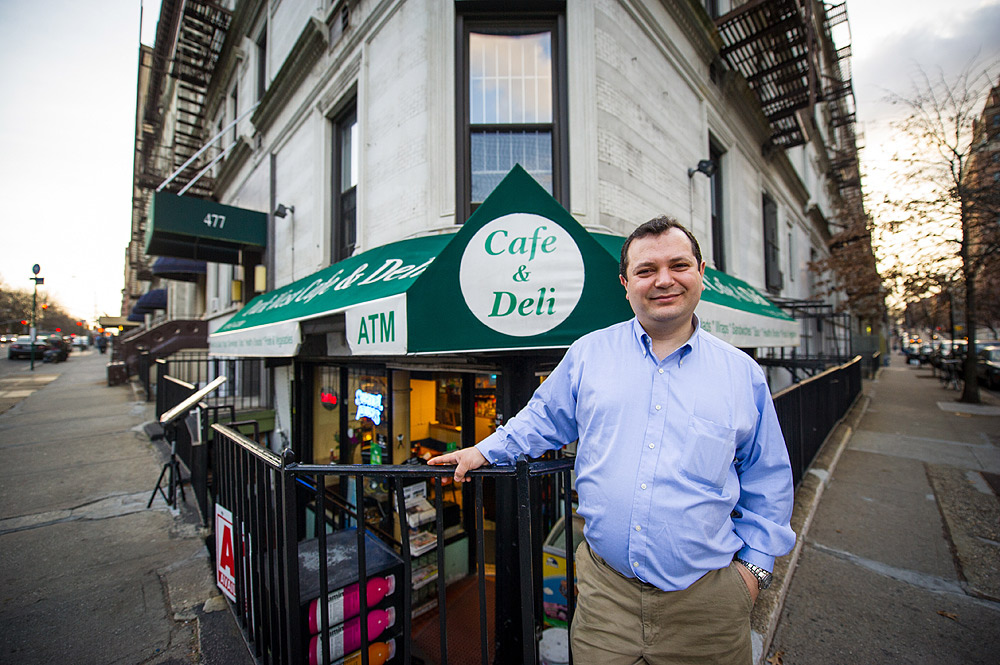 With a central location between the Upper West Side and Morningside Heights, Park West keeps its diverse clientele supplied with both standard bodega fare like toilet paper and Advil, plus Turkish specialties like zucchini pancakes and baklava. Owner and manager Basri Cingir has been running Park West with his brother and five employees for over half a decade. Eater recently talked with Cingir about Turkish cuisine, running a small business, and his plans for the future.

When did you found Park West? What brought you to start a deli? Actually, there was a deli here before, and five years ago, when I was looking to do my own business, I was looking for places. And, you know, it’s not an easy decision—when you begin and you’re signing up for some period of time. You need to be successful or successful; there’s no way out. I checked out several different places, and after that, I decided if I buy this place, I could be OK and I could be more confident. I started up after that.

I’ve heard Park West specializes in Turkish food. Is that right? Actually, we are a deli/café. We have sandwiches, we have burgers, but other than this, we mainly have Turkish, homemade foods. It’s cooked in another place which belongs to us, and they are delivering it to us and we are serving it here, both for here and to go.

What are things Park West stocks you wouldn’t be able to find at other places? Park West Café is unique. Our sandwiches are good, but you can find a sandwich anywhere. Our burgers are sirloin burgers, and it’s good, but there are gourmet burger places. And Turkish restaurants, you could go and get lots of different kebabs and everything, and you could like that too. But the homemade Turkish food—we are the only one in Manhattan.

Throughout your five years in business, do you have any stories—strange customers, that kind of thing? When you are in business, you are experiencing these anyhow. Our business is our business. You devote yourself, you work hard, longer hours, and at the end, perhaps your bank account is the same. The only thing that makes you happy in this case is your satisfaction and your customer satisfaction. They share with you, and that’s one of our biggest strengths. We have really nice customers, and we do catering too—Columbia University’s our biggest customer.

Any stories from owning and running a small business? Our goal was trying to make something nice and affordable. Our place is good for that, but we have a future goal, and we cannot reach it now because we are not financially ready or operation-wise ready. One of my good friends, he has a business in Istanbul. When I was living there, he had around seven restaurants, and right now, he has more than ten. He’s making homemade foods and selling fast foods; everything is homemade. Whatever you want, it’s already ready, and you’re choosing and eating your meal at an affordable price. But his place is in a really crowded area, the Times Square of Istanbul. Just in that store, he has around four thousand customers per day.

So are you aiming to expand or add new locations? Right now, we’re just testing ourselves—how good we are. That’s the honest answer. When we came to Park West five years ago, it was a completely different place. Every year, every month, you try something, you eliminate something, trying to make it better. That’s why we said we’re going to make ourselves ready and go for a run, and postpone for almost five years.

You mentioned earlier you’re from Istanbul. Can you tell me a little bit about your background and when you moved to New York? I graduated from my first college [with a degree] in tourist and hotel management, from the top college in Turkey, comparable to Harvard in the United States. I was working at the Sheraton International at that time. But at the time was the first Gulf War, and all of the reservations were cancelled—everything was collapsed and we didn’t know what was going on. I continued my education in business at another college. I was working at the bank while I was studying and got my first promotion as soon as I graduated. It was quite good, actually; Fortune 500 company, manager-level, nice salary, full coverage. But sometimes you like to fly with your own. I guess I got bored or they pissed me off, I don’t know the answer exactly. I tried to go out on my own, and my brother was insisting that we could make something —why not? And we started out from that, why not.

So you own Park West with your brother? Yeah, my brother’s helping me out. He’s not full-time right now, but I believe he will be in a couple of months. We just bought another business. It’s not open to the public yet. We’re just making some arrangements—we just moved our kitchen there, and it’s more comfortable, nicer.

Is it a restaurant? It’s another café, at 107th and Manhattan. Right now we’re just trying to make it right. I’m hoping that this summer it will be open.

What’s something you’ve learned through operating your own business? It’s nice, exciting. But you’ve got to be ready to struggle. The United States’ economy is changing and everyone’s on a budget. We’re affordable, but the entire community is affected. But we have some nicer things to aspire to for Park West Café, and I hope we can agree with our landlord on an early extension—we have three or four more years on our lease anyway, but we’d like to make some improvements very soon. And as I said, our foods are unique.

Where is it made? In our new place, we converted the kitchen. Our chef is a Turkish lady; we found her by chance. I took out an ad and she applied for that. She went back to Turkey after some time, but she came back again and got married. I hope she’ll continue with us for several years.

What are your specialties? We’re not a vegetarian place, but we have very nice veggie stuff, like zucchini pancakes. It’s delicious, but it’s really hard to make. There’s also eggplant and pepper in tomato-based sauce with garlic and kofte, Turkish meatballs, with tomato and pepper. It’s two levels of cooking, first pan-frying the meatballs and pan-frying the potatoes and putting it with the tomato-based sauce and cooking it so the meatballs absorb the tomato flavor.

What are your most popular items? The zucchini pancakes are really popular, and our kofte and some kebabs. For desserts, baklava and our homemade chocolate brownie.

Do you have any regulars? What are they like? I was just speaking on the phone with one of them. She was very positive, coming around here every morning for a coffee and sandwich; I’d call her “Sushine.” She moved back to Illinois because her family’s there, but I still get cards from her mother because she told her about us. We sent some specials, Turkish Delight and baklava, to them, and she was calling to thank us. We have others, too; we’re like a family here.

Is there anything else you’d like to share with our readers? I forgot to mention that we’re also a deli. We have unique Turkish groceries. To make a Turkish rice pudding, you need Baldo rice, and Baldo rice doesn’t look like Uncle Ben’s. Or if you’d like to make some Turkish tea, you need tea, which we sell. The products we’re selling, you can’t find them in the United States or other places. Or baklava—this is Turkish-imported baklava, one of the most famous brands in Turkey. And that’s it; that’s us.
— Alison Herman