Mohammad Toha, Owner of Green Leaf Deli on the UWS

Share All sharing options for: Mohammad Toha, Owner of Green Leaf Deli on the UWS

All throughout the rest of Bodega Week, we're going to be meeting the people that make the neighborhood bodegas of this city run. Right now: Mohammad Toha, of Green Leaf Deli: 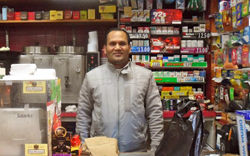 Amsterdam Avenue is home to many bodegas – there’s one on almost every street corner. But if you walk up to 85th Street, you’ll find Green Leaf Deli, a little gem of a store covered in blown-up photos of sandwiches. For the past six and a half years, owner Mohammad Toha has been serving breakfast sandwiches to high schoolers and hearty heroes to the locals. Eater sat down with Mohammad and learned what it’s really like to run a New York City bodega.

When did you open Green Leaf Deli? Mohammad Toha: About six and a half years ago. We bought this space from someone else. It use to be called Andy’s Deli.

What made you decide to take over the space? I had worked in this business before. I started as a stock boy and within three and a half years, I got promoted to manager of the store.

That’s an impressively quick progression. In my mind when you work, you work. So I worked hard and the pay was good, especially in my managerial position. But my goal wasn’t to own a deli. My goal was to study, to go to college. If I worked for someone else, I wasn’t going to be able to work and go to school at the same time. So I bought this store.

Is it hard to balance your school work with your shifts here? It’s very hard. But that’s why I wanted to work for myself – I use to work six, sometimes seven days. Now I work three to four days a week and go to college the other three to four days. When I have too much homework, I just don’t work. I have my employees here.

Do you think you’ll continue running this store after you graduate? No. The first three years I was here, I got my bachelor’s degree in Organizational Management. Now I’m doing my MBA – this is my last semester. March 31, I’ll complete my MBA in Finance. I hope one day to get my PhD from NYU or?maybe Princeton. But for now, when I graduate in June, I hope to get a job teaching or maybe an internship at the World Bank or some place like that. I’ll probably give the store to one of my employees?or sell it.

Have there been any challenging times during the past six years? The economy has hurt us a little over the past few years. This type of store isn’t a million dollar business – it’s a nickel and dime business. People use to buy more – they had more money. But now no one has money. So it’s been hard because people aren’t spending as much.

Have you had to change your prices to make up for the bad economy? No, I can’t. There is a grocery store down the street and they have sales – every week there is a sale. So if I raise the price of my groceries, no one will ever come here.

So what type of customers do you get in your store? Most people come in here when they’re in desperate need of something. Otherwise, my best customers are the high school students. There’s a school near by.

Are there any challenges to having students as your number one customers? Ha. Yes. I call them “Sweet & Sour kids.” They are great customers, coming in every day, but sometimes they steal. Which costs me. And they also don’t have as much money because they’re kids so they don’t spend that much. They order the cheaper items, like the breakfast sandwiches that only cost $3.00 or $3.50.

Do you think that limits your business? Yes and no. They come here in big groups – sometimes up to 30 of them are standing in line to get in – so that adds up. But that can scare off the locals, the adults who might buy the more expensive subs for $6.00 or more.

What are your busiest hours? The morning – 8 to 10 AM. It’s very crowded in here then because of the high school students. And 12 to 1 PM when the locals come in then for lunch. We also have delivery which keeps us busy - I have a lot of deliveries.

How can people place an order for delivery? We have an online ordering system. Seamless. Or on our website. We’ll deliver from about 7 AM up until 1 AM to anyone within ten blocks.

A lot of your sandwiches are named after New York City streets or neighborhoods. Is there a story behind that? I love New York. I came here in 1994 – from Bangladesh with my brother. I had nothing and America gave me a lot of things. It’s my way of appreciating this city. But I also thought it would be appealing to the customers. I thought the unique names would get them interested and make them want to try something new. Even if they just try it once.

What’s your most popular sandwich? Well the high schoolers love the breakfast sandwiches – the bacon and egg, ham, sausage and egg, those things. But the locals like the West Side Highway, the Central Park West, and the Union Square. And the United States Hero. And the Roosevelt Island is a best-seller?here, I’ll make you one.

Thanks! What’s in a Roosevelt Island? Chicken, pastrami, smoked mozzarella cheese, lettuce, tomato, and pickles. All on a hero sub. It’s a big sandwich. All of our sandwiches a big - they're pretty packed with meat and toppings.