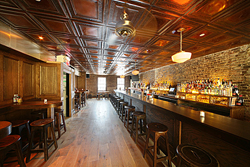 Stephen Starr wasn’t the only one who had a hard time at Community Board 2’s SLA Liquor Licensing Committee meeting last night. In a lively meeting that lasted six and a half hours, CB2 hashed out the details of several exciting proposals amidst some serious drama (there was a lot of hissing, clapping, and disgruntled chatter). Here’s the scoop:

1) Violetta and Sergio Bitici, the father-daughter duo behind the Italian Steakhouse Macelleria, asked the board for a license to sell liquor on the premises of their new restaurant which will be located on Hudson Street. The new space is still in the early stages of development — they haven't even started construction — but the plan is for a 56-seat restaurant that has a similar concept as their current spot in the Meatpacking District. They're also thinking of including a small butcher shop in the space. Violetta stated that the restaurant's closing hours will be 11:30 PM, just as they are at their current restaurant.

One community member voiced her support for the restaurant saying it "was a breath of fresh air" as the community doesn't often get proposals from restaurateurs agreeing to close early and help protect the peace in the neighborhood during the wee hours. The board unanimously agreed that this new venture would be a great addition to the area and recommended the request be approved granted the Biticis agree to close their windows and doors by 10 PM every night and to keep their music at a respectful level at all times.

2) The Brass Monkey presented the board with quite a challenging proposal, seeking an alteration to their liquor license. Sean Cunningham, the owner, disclosed his plans to take over the space next door to his current, expanding the bar's square footage and bringing the total occupancy to 371. The board wanted to support the Brass Monkey for a number of reasons including the fact that the bar already currently exists on the block, it's located in a non-residential area, and Cunningham has a great relationship with the neighborhood, but they were very concerned with the increased size of the bar. One board member commented that the space was becoming a monster and that the idea of a bar that big sounded absurd. The board agreed to recommend the proposal be denied unless the Brass Monkey team agrees to come back next month and deliver more specific information about a few major areas of concern including use of their outdoor space, their plans for security, and their plans for regulating their patrons once they leave the bar.

3) George Forgeois, the man behind Cercle Rouge, Café Noir, and Jules Bistro, appeared before the board with a proposal for a new restaurant on Varick Street. The still unnamed restaurant will be a 63-seat French bistro. Mr. Forgeois informed the board that he plans to have a live jazz band preform during brunch, wants to have a DJ present in the restaurant to program an ipod based on the vibe the diners give off, and plans to stay open until 2am during the week and 4am on the weekends. The board was baffled by the idea that a restaurant would ever need to be open that late and was concerned that all the pieces were coming together to create the perfect environment for night club. After a quick aside with his lawyer, Mr. Forgeois conceded on the hours of operation, agreeing to close at 2 AM Sunday through Thursday and at 2:30 AM on Friday and Saturday, and agreed to limit the hours the jazz trio would be permitted to perform, but he would not give up his idea of having a DJ and tried to argue that it was necessary to his vision. The board was not happy with his steadfastness and with the risk of a denial on the hoizon, Mr. Forgeois agreed to lay over his proposal until next month so he could take some time to really think through the whole disc jockey situation.

4) Niu Noodle, which will serve ramen, dim sum and dumplings, came to the board seeking a liquor license for the new project. The proposed restaurant plans to take over the space previously occupied by the sushi bar Ample, which one board member was very sad to see go as the owner was a great guy. A representative of the restaurant, George Eng, was present to assure the board that his group were good people too. The board voted to recommend this restaurant's request for a liquor license. One board member noted that after some of the other applications he had seen come through for the space, he was very pleased that Niu Noodle got the nod.

5) The owners of Ipanema, a bar that has been located at 252 W 14th Street for the past 20 years, came to the board seeking a new liquor license. Due to an increase in their rent within the past six years, they can no longer afford to stay in their current space and will be moving their bar down the street to 242 W 14th Street. The plan is to recreate their current bar in a bigger, better space with an expanded menu. While the board and several members of the community appreciated that Ipanema is truly a neighborhood bar, they worry that by moving to a new space that was previously unlicensed (it use to be an adult video store), Ipanema is leaving behind their previous bar space, opening up the possibility for someone to take it over and bring yet another bar to the neighborhood. One woman spoke in opposition of the application saying that the area has too many bars as it is with nine licensed establishments in the neighborhood. After a short debate, the board voted right along with the opposition, agreeing that the area was getting out of control. They voted to recommend that this proposal be denied.

6) The Bowery House came forward last night with plans to open a restaurant on the premises of the hotel with Italian chef, Andrea Mainardi at the helm. Alessandro Zampedri, the owner of the proposed dining space, spoke to the board, asking for a license that would allow him to sell beer and wine until 2am seven days a week with food served until closing. After a few rounds of back and forth with the board, Mr. Zampedri clarified that no food or alcohol would be permitted to leave the restaurant (meaning no room service will be available to guests of the Bowery House and no alcohol will be allowed in the House’s rooms or on the rooftop space). A few community members spoke out against The Bowery Kitchen as they felt that the area immediately surrounding the proposed restaurant/bar was already problematic with two other busy bars in close proximity. They argued that they didn’t need any more drinking institutions in the neighborhood. The board voted to recommend the application be denied unless the owner is willing to speak with them more to clarify the parameters of their beer and wine use.