Share All sharing options for: Summer Opening for The Butterfly; Joe Carroll Expands

It's been a wild and crazy Bodega Week so far. Check back this weekend for more corner store-related excitement. 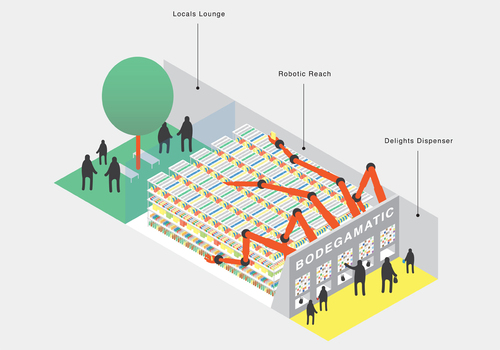 [A slimmed down bodega rendering]

EXPANSIONS — The Robs learn that Joe Carroll, proprietor of Fette Sau, is opening another Williamsburg restaurant devoted to Baltimore-style fried seafood. In other expansion news, Sushi of Gari is opening a new location in the old Bouley Bakery space in Tribeca this summer. [Grub Street]

BODEGA WEEK 2012 — Racked has a supercut of a bunch of bodega scenes from famous TV shows and movies, a video on how to spend $100 at a bodega, and another profile of an adorable Bodega cat. Curbed wonders if we are living in the twilight days of the NYC bodega, and the vote for NYC's best bodega enters its final round. Also: a team of architects imagine two slimmed-down bodega concepts. [Racked NY, Curbed NY]