Rafael Melo Reflects on Eight Years of Owning a Bodega

Share All sharing options for: Rafael Melo Reflects on Eight Years of Owning a Bodega

All throughout the rest of Bodega Week, we're going to be meeting the people that make the neighborhood bodegas of this city run. Right now: Rafael Melo, of Melo Grocery in Williamsburg: 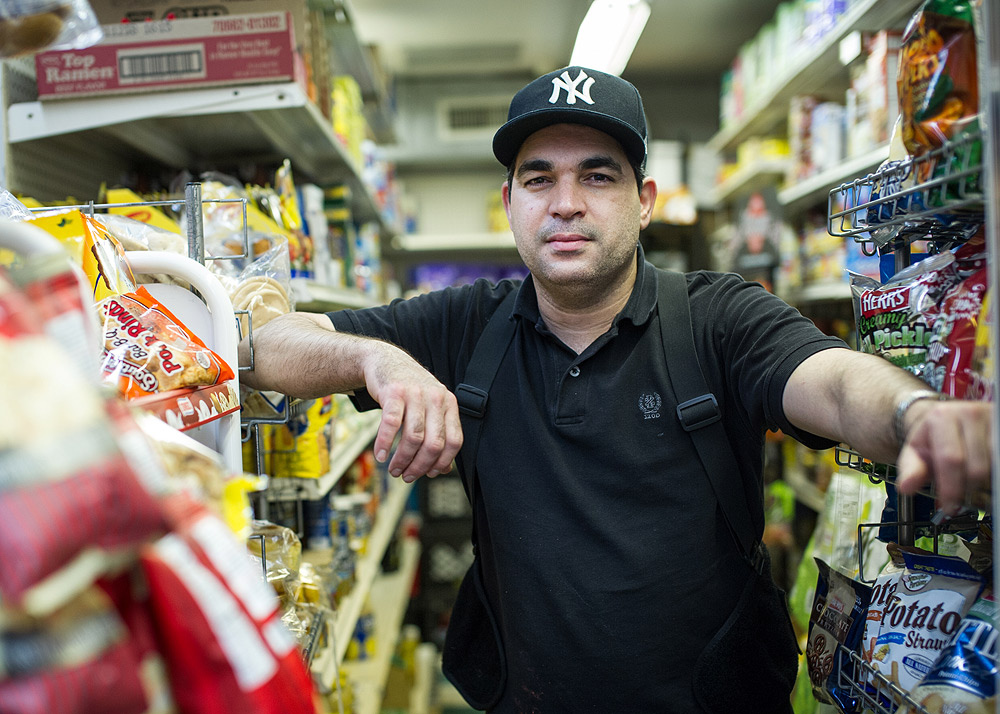 A few blocks away from the over saturation of gourmet delis that line Bedford Avenue in Williamsburg, you may stumble upon Melo Grocery on the corner of Havemeyer and South 2nd Street. Over the last eight years, this bodega has built up a loyal following of people who live in the neighborhood. We recently chatted with owner Rafael Melo about life at the store, and how the neighborhood has changed over the years.

How long have you owned and run Melo Grocery? Rafael Melo: For the past eight years. Everything has changed in Williamsburg since I opened this place. Williamsburg was a Spanish neighborhood before with lots of gangs. Now, most of the time, it's quiet. I'd say 80 percent of the neighborhood people have changed.

Do you think it has changed for the better?Yes, no doubt. People around here feel like it's for the better. The customers are changing too. It used to be only Spanish people coming in, but now some of the new people are coming in.

What is the most popular item on the menu?The Philly cheese steak. We also have this Spanish style sandwich where we use plantains instead of bread. People love that.

What's your personal favorite sandwich? Wheat bread, chicken, and pickles. That's all. It's not on the menu, I just make it for myself.

Who came up with all the names of the sandwiches?The man from Boar's Head! And me. A lot of places have a Tomato Delight but we were the first ones to come up with that. The first guy who ate it put mustard, ketchup, mayo, vinegar, and hot sauce on it and I said, "Oh man you're going to die of that!"

You have a sandwich called the Carmelo Delight. You must be a Knicks fan. Yeah. We used to have to guys working here. Ones name was Carmelo and the others name was Anthony. People would come in and say we had the dream team working right here!

What changes has the bodega gone through in the past few years?
We used to only have Spanish food and Spanish products. With these new people coming it with have to keep up. Now we stock things like Wasabi roasted seaweed snacks. That's the kind of thing the new people in the neighborhood want. We never would have had that before.

Any perks to running a bodega? It's good and bad. You are the one in control. You tell people when to come in, to do what you say, but otherwise it can be tough.

How is it tough? Sometimes you see the employees joking around. Its hard when you have other things on your mind like having to pay the rent, the gas bill. You see things you haven't seen before.

What kind of things haven't you seen before? The economy is the main part. There is less production and prices just keep going up. Bills go up and you can't get back. In the last two years the merchandise has gone up 20 percent in prices and it's only going up. So we have to raise our prices. In the end, the customer is the one taking the hit. But our expenses go up too. Before we paid $1000/month for bills. Now it can be anywhere from $2000-$3000/month.

Why did you decide to open bodega? I came from Santo Domingo. I can enjoy it because I grew up doing this. When I came to America I worked at a grocery store. It's easier for me than going in to a new area, starting a new business I don't know about. And it's better being here than back home, business is still good.

There are three bodegas on this block. How do you compete? We were here before! The Spanish people in the neighborhood come here. The new people see we have the best product and prices and so they come here. Those 24 hour places try to take our business when we close down for the night, but still during the day, people will come to us.

How do you see your future here? I've been here too long already! Now you have to be a 24 hour place to compete. That's too much for me. I'm already here all day. Once I really need to become open for 24 hours to compete, I'm closing down.

What aspect of your job do you enjoy the most? One thing I really do enjoy is spending time with my son and daughter. I'm separated from their mom so we don't live together now, but they do their homework here, hang out with friends, sometimes they work here. Getting to spend time with them is the best part.