Share All sharing options for: Win Dinner with A Celebrated Oregon Winemaker 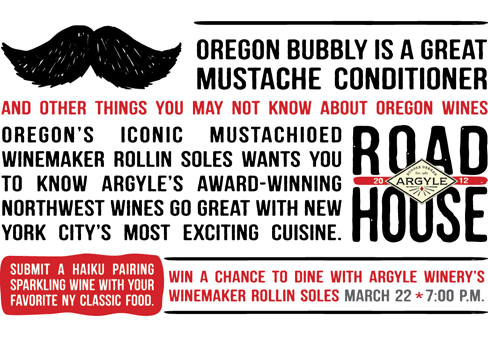 It’s a bi-coastal match made in heaven: Wine from Oregon’s Willamette Valley meets New York’s renowned East Coast fare. On Thursday March 22, the two will be paired at a special dinner hosted by Argyle Winery’s celebrated winemaker, Rollin Soles. And you can win a seat at the table.

Here's how: Submit a haiku telling us which favorite New York classic food you’d pair with Oregon Brut or Pinot Noir and you could win a pair of seats to the table. Forgot how to haiku? It's easy: three lines, the first with five syllables, second with seven syllables, third with five syllables. Standard contest rules apply.*

Argyle celebrates its 25-year anniversary in 2012. Recognized 11 times in Wine Spectator’s “Top 100 Wines of the World,” Argyle’s Extended Tirage Brut is the highest rated sparkling wine made outside of Champagne, France.

*Must be 21 years of age or older to enter. Submissions must meet haiku rules. Multiple entries are allowed; individuals can only win one prize. Three winners will be selected by March 19th. Winners must confirm prize within 4 (four) hours of notification.