The Tippler Dishes On Its Own Champagne-Loving Whale

Share All sharing options for: The Tippler Dishes On Its Own Champagne-Loving Whale

It used to be that nightclubs did not want the outside world knowing what was happening beyond their velvet ropes. With the advent of Twitter and other social media, nightclub owners are now much more willing to let the masses know what's happening inside their gilded walls, tweeting out information about DJs and certain celebrities who are hanging out to help build the club's cred. There are still some things that are considered sacred by club owners, especially protecting your best customers spending habits private. There are a few reasons for this. First, club owners are always hoping to lure these free spending whales to their venues, because who wouldn't want a customer who is willing to spend thousands of dollars on one bottle? And second, because customers who blow money like this don't really want the publicity it can bring. 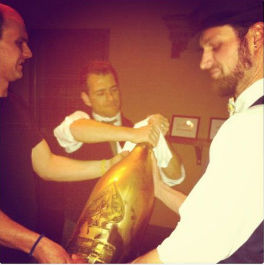 Today a publicist for the Tippler sent the following email:

Neighborhood bar The Tippler just made "high roller" status! Saudi Billionaire and record holder of the most expensive bottle of champagne ever ordered, transformed The Tippler on SATURDAY NIGHT from local watering hole to luxe club by ordering a one-of-a-kind bottle of Armand de Brignac Ace of Spades for a grand total of $60,000. The newly dubbed "King of Champagne" was the first ever to spend that much money at this favorite Chelsea bar (and perhaps in all of NYC for 2012) let alone any of Michael Barrett's (The Tippler's owner and China Club icon) other establishments. It was a truly unforgettable night!

Of course Saudi billionaire is most likely just a poor front for "Champagne King" and Certified Whale Don Jonson, who loves nothing more than buying these trophy bottles of Ace of Spades and was in town last week.

Now maybe Michael Barrett was thinking that this news would be just the thing to help put the Tippler on the map, or that someone like Don Jonson, who you can find all over the intertubes wasting his gambling winnings on Champagne, wouldn't care about a little bit more publicity. But it seems like a strange business pracive to rat out your customers for some cheap PR, which seems like a path to winding up without any customers. Or as Provocateur owner Mike Satsky (no fan of using social media for promotion) tells Eater, it "sounds like they are new. I would advise them to act like they have been there before, it's a cardinal rule."
· Nightlife Coverage [~ENY~]