Share All sharing options for: The Littleneck Dudes: Aaron Lefkove and Andy Curtin 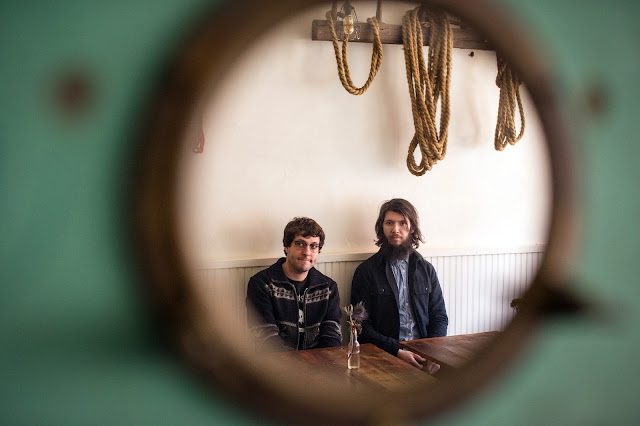 Littleneck is the four-month-old New England-style clam shack near the Gowanus Canal, from friends and former bandmates Aaron Lefkove and Andy Curtin. So far people love the food from chef Alan Harding, and the rustic beachcomber vibe of the dining room. Littleneck is also somewhat famous for a charming video that was posted to micro-financing site Kickstarter last July. We recently chatted with Aaron and Andy about how the project came together, and what the wait is like at Littleneck an average night.

It's Saturday at 8 PM. What's the wait for two? Aaron: It depends, usually a half hour-ish. Sometimes you get lucky and you can just walk in and snag something. But I'd say that if there is a wait, it's going to be a half hour. Of course, you're more than welcome to wait at the bar.

Is that the busiest time of the week? Andy: The restaurant business is all up-and-down. Some nights are great, some nights aren't as great. Saturday is our best night I think, because people are off work or whatever so they come in and they're more relaxed.

Who are your VIPs here? Aaron: Everybody's a VIP that comes here. I like to treat every customer as if they were a VIP. In terms of celebrities...I don't know if there's any recognizable names. One of the contractors from This Old House was here. And you know, we did all the work on the space ourselves. He admired our carpentry work and told us that we did everything the right way.

That must have been a huge compliment. Aaron: Andy is really more of the construction guy. He was in fanboy land. But yeah, it's a huge compliment when someone who really knows what they're talking about comes in and compliments your handiwork. We've had a lot of industry people too. We've gotten some nice words from the people from The Spotted Pig and The Breslin. That actually means a lot when you have the respect of your peers, from people that we took inspiration from and that we look up to, like Doug Friedman. He told us we were doing everything exactly the right way, so I think that's kind of the most flattering thing.

When was the first time you talked about doing something like this? Aaron: It's coming up on two years. Andy and I knew each other for years. We played in bands together, we traveled together, we were friends for a long time, and we've been all over the place together. His whole family is from Massachusetts, and we were having a barbecue in his girlfriend's backyard, and we were actually making steamer clams, and we were like, "Oh, there's nowhere in town that's really doing this." We were both sort of at a point in our lives where we were frustrated with what we were doing. I was working in an office job, and he still runs a cab company in New Jersey, but we were just kind of like, "We should do something that we want to do, rather than something that we have to do or that we're settling for." It was sort of the perfect storm of opportunity, and it just came together. But I'd say that from day one of talking about it till opening was about 18 months. Probably the most stressful 18 months of our lives. At the end it's really worth it.

Did the Kickstarter campaign bring a lot of attention to this project? Aaron: Yeah, it definitely did bring us a lot of attention. I think we had a good story, and I think a lot of people latched onto that because we weren't jaded people — we were really just trying to do something and we were just coming up short. It got us a lot of attention, and it built a connection with the community, and you can't really put a monetary value on something like that. And it got us in the eye of the neighborhood and the people around here, and we've made some lasting friendships and connections out of that.

Do you still honor those pledge incentives? Aaron: Yes. No one took us up on that $5,000 free oysters for life, however. If they did, we're totally on board to stand behind them 100 %.

How was opening day? Andy: I thought there was going to be no one in here on opening night, because all we did was turn the sign around Aaron: We just had brown paper in the windows for weeks, and then we put a sign up in the window that said, "Hey, we're opening up," and we sent an e-mail out to all of our friends. Andy: It was strange. For the first weekend it was great — we couldn't even serve that many people. Then it kind of died back down to normal, now it's picking up again, but we're actually able to service people the right way with staffing and getting the food out on time. Aaron: We did actually have some hiccups along the way in terms of not knowing what to expect with the crowds and the staffing, so it took us a few months to, not to use a corny expression, but to get our sea legs. But we finally found the right balance of who we need on the floor, who we need in the kitchen, and how we need to structure all that. I think we're at a point now where the service is coming off flawless.

What's the strangest request that you've accommodated here? Aaron: The night before were were open, we were in here doing some last minute painting, and we wrote out a bunch of fake specials on the specials board. We put up "fried tuna rings," and I put it as a joke tip on Foursquare. And then somebody saw that on there and came in and ordered it. Andy: The waitress came back to me and said, "There's a couple that wants to order the fried tuna rings. They say it's off the menu. Can you explain that to me?" Aaron: We had to explain that it was an homage to White Castle.

How did you bring Alan Harding on board as chef? Andy: He kind of found us. He rode his bike by the restaurant one day, and I was in here nailing something. We had a chef already, but it wasn't really working out. Aaron: He dropped off his resume just like anyone else. Andy: The next day he comes back with a menu, a proposed menu. I was like, "This is the most professional, organized guy ever." Aaron: I think that what it came down to was that we had a guy that we were working with, and Alan was just helping us out. He'd bring us different things that we needed, and look at what we were doing and give us points of advice, and he was sort of hinting that he wanted to work with us or mentor us. We were working with somebody else, and Andy and I were both sort of unhappy with it. He came in here one day and we offered him $100 to cook the menu that we had, and we offered the other guy $100, and it just came down to who wowed us, and he just kind of hit it out of the ballpark.

You got a big wave of press. Did you think it was too soon? Aaron: It's a double-edged sword. I mean, we certainly didn't go groveling to anybody for anything, so I'm happy that we're getting noticed on our own merits rather than getting a publicist and getting somebody to go out there and shill for us. But having so much press early on does set you up with a lot of expectations. You know how people are... there are a lot of people that, before you even open, they want to see you fail and they want to take you down a peg. But I think that made us work harder in order to meet and exceed everyone's expectations. Andy: Yeah, there's no down time now. It's not like we even had time to properly incubate. We've just had to stay at the top and keep going. Aaron: We're still pretty new to this, so we don't have any laurels to rest on at this point, which is a good thing, too.

A lot of people are very opinionated about things like lobster rolls. Have you gotten any customer feedback about the seafood dishes? Andy: Oh, everyone's got their idea about how it should be, and everyone's right — everyone's got a PHD in lobster rolls. Aaron: Chowder too is very polarizing. Andy: But to me, our chowder is the best chowder that I've ever had. Alan's recipe is just awesome. Aaron: Some people complain, because they don't like the kick from the white pepper, some people think the clams are minced to finely, but no two chowders are created the same. That's the beauty of a dish like that — everybody puts their own spin on it. Andy: We've got people licking the bowl, so I'm really excited about it.