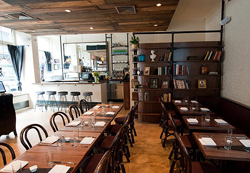 Last night in the basement of St. Anthony of Padua Church, Community Board 2's SLA Liquor Licensing Committee meeting spanned a whopping seven hours. The board heard from quite a few notable restaurants but was hard pressed to grant many of the proposals.

1) One half of the husband and wife team behind Taim and Balaboosta, Stefan Nafziger, came before the committee to ask for two licenses. The first was to upgrade Balaboosta to a full liquor license. The full service restaurant currently serves beer and wine, but Nafziger stated that his customers continue to ask if cocktails are available. The second proposal was in regards to 45 Spring Street which will become a falafel and smoothie spot. The property, which was previously Rocky's, held a full liquor license but Nafziger was looking to downgrade to a beer and wine license as a sort of trade off between the two restaurants. While there was quite a bit of opposition from the crowd, the complaints were mostly about the fact that Rocky's closed down. The board did eventually grant Balaboosta the upgrade but denied 45 Spring Street any license to serve alcohol.

2) Dan Rafalin came to the board on behalf of Public where he was looking to get an alteration to sell liquor on premise. The proposal was to turn Public's Monday Room into a more private bar where they hoped to add five new seats. Even though the board acknowledged that Rafalin and Co. were respectful and trustworthy owners, they still denied the application due to the concentration of bars in such a close proximity.

3) The owner of Pop Pub on 83 University Place, an offspring of Pop Burger, asked the board for an upgrade to a full liquor license. After a brief overview of Pop Pub, Co-Chair Richard Stewart interjected adding his own experience with the Pub was that their music was offensive even from a few blocks away. Soon after, the discussion was handed over to the community wherein angry neighbors bashed the proposal, citing that Pop Pub had been involved in the beer-a-thon which contributed to a rowdy crowd and that they should not be trusted. In the end, another Community Board member pointed out, "Why do you need a martini with a burger?" and so the proposal was denied.

4) Hersa Hospitality Trust, who was representing the new Hyatt on 4th Avenue and 13th Street, was looking to gain a full liquor license for a proposed restaurant, lounge, bar, rooftop and in-room service. The group had put all the applications together and instead of their intended effectiveness, over an hour and a half was spent, mostly in confusion, about the proposal. The rooftop restaurant, which is planned to hold 40 seats for dining, only provoked the committee where they claimed they had never heard of a quiet roof. Even with the support of the community and surrounding buildings, the committee was still far from convinced. At the end, the group decided to lay-over the proposal to work out the details of the application.

5) Two applications with Chinese restaurant concepts came forward seeking new licenses to sell liquor on premise. The first, Celtic Dragon, an authentic Chinese restaurant concept, was looking to occupy 157 Lafayette Street, which has been vacant since 2000. The owner was asking for a 4 AM closing time in order to cater to the late night crowd. These days the board hardly grants 4 AM closings and suggested that the proposal be revised and brought back next month. The second application was for 3 Howard Street. The name and details have yet to be worked out, but the concept is an honest approach to modern Chinese with local and naturally sourced ingredients. Even with support from the landlord and architect the board was still resistant to the idea of granting another license without hearing the full details.

6) Triona’s Irish Sports Bar on Sullivan Street has faced quite a bit of opposition in the past two years of being open. Due to violations, the owners were looking to add a prep kitchen and convection oven so that they could prepare simple bar food. The crowd of angry neighbors soon took over, stating what terrible and disrespectful establishment Triona’s was. At the end the board was faced with a dilemma to either grant to proposal so that Triona’s would be complying with rules, or deny the application and have them be in the same situation. After some debate, the committee decided to deny the application to show their lack of support.
—Alexis deBoschnek
· All Community Board Coverage [~ENY~]