Share All sharing options for: Jeff Lutonsky and Meghan Love of Mable's Smokehouse 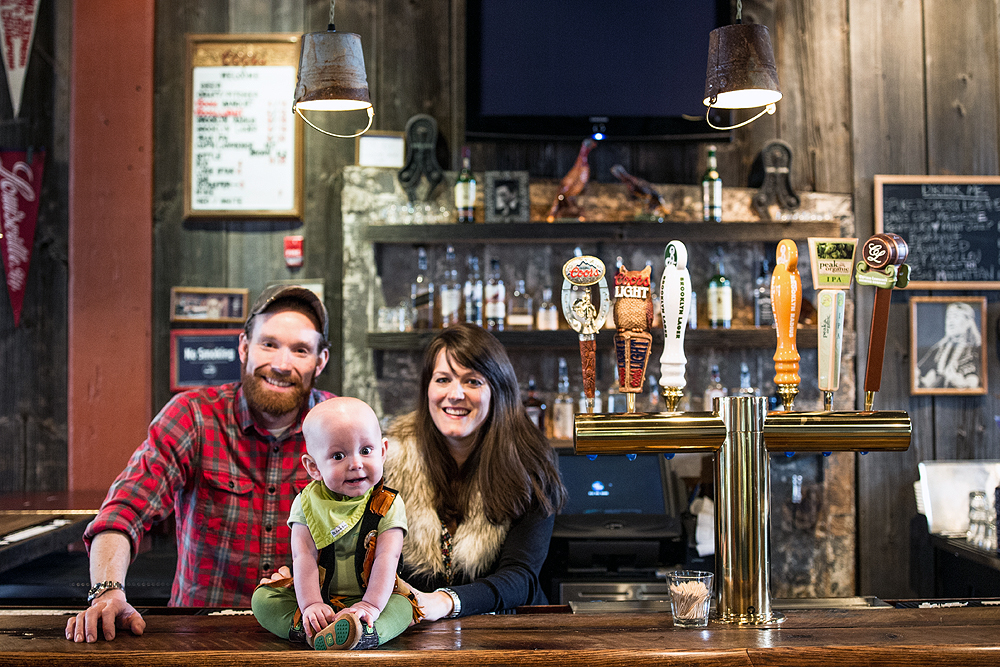 [Jeff and Meghan with their newborn baby, Henry Love; Krieger]

Mable's is the massive, totally unpretentious barbecue joint next to the Brooklyn Brewery in Williamsburg. The restaurant serves a number of house-smoked meats and down-home sides at a very reasonable price — you can get a huge plate of Oklahoma City-style barbecue with all the fixins for about $15. This is the first restaurant from husband and wife team Jeff Lutonsky and Meghan Love, who built the place themselves based on a a dream that Jeff had one night. Here's a look back at the first year of Mable's from Jeff and Meghan:

When was the first time that you talked about opening a restaurant? Meghan Love, owner: Jeff was working in the art business in Chelsea. He was the director of an art gallery, and he was basically just working on commission, and the economy tanked. No one was buying art anymore. He'd always been an avid barbecue guy, and then he had a dream one night that he had opened this little hole in the wall. Jeff Lutonsky, owner: It was just like this corner, walk-up shack kind of thing under the BQE — that's where my dream took place. And all we sold were pulled pork sandwiches, and we ran out so we had to come up with something, so we started selling grilled cheese sandwiches. I grew up in restaurants. My mom had restaurants since I was like seven years old, so that's pretty much what I knew how to do the most, besides working in the art business. Meghan: And I had worked in the front of the house of restaurants for 20 years, since I was a teenager. And so he turned to me and asked me if I wanted to open a restaurant, and I was like, "You've got to be out of your mind. What are you thinking?" Then I shrugged my shoulders and said, "Alright, let's do it."

What are some of the restaurants that you worked in? Meghan: I worked at Pastis in 2001, when it had been open about a year. So I was a head waiter at Pastis, then I totally switched gears and worked at Tortilla Flats for like four years. I was a bartender and a manger and a waiter, and loved working there. And then I worked at Commerce in the West Village as a bartender, and I basically was working there when we were in construction. I would literally make like $200 at the bar, and I would come and we would buy like a plank of wood to make a table. Jeff: Or we'd buy copper pipes for plumbing. Meghan: It was that intense. Because, of course, like everybody, we ran out of money about ten times. We never planned that it was going to be as expensive as it was.

So you did the build-out yourself? Jeff: We did everything that you can do where you don't need a license. We built the open kitchen, we did all the carpentry, we did all the tiling, we built out the walls, we built the porch, we installed all the wood. We actually found the barn wood online, rented out a box truck, and drove out to Buffalo. We picked it up, hauled it back, and installed it all ourselves. Meghan: I put up that wall with my sisters and my best friends. Friends would just come and help us. Jeff: We'd have painting parties, and buy some pizza and some beer, and everybody would grab a paintbrush and a ruler. Meghan: But it took a really long time.

How long? Jeff: Almost a year and a half. But also, I'm super anal-retentive, so I had to make sure that all the boards were perfectly spaced, and all the corners were perfectly done, and all the trim was right, and we had to stain all the wood. Meghan: We got married right before the restaurant opened, and I was shocked that we made it to the wedding after that build-out. It was crazy, because Jeff was like, "Every bit of trim..." And I was like, "It's fine. Move on." And he said, "Nope, it's gotta be perfect." And he was right because we built the foundation so that it really will last a long time. Jeff: The whole idea of designing and decorating this restaurant was to make it like super-familiar with people from the south, so that people would say, "Oh I could be in Tennessee, or Texas," or you insert the state. And we also wanted to make it comfortable.

Did people check it out when you opened? Meghan: Yeah. We were really busy for like the first three months. We got a lot of press, but we never hired PR or anything. I sent out one press release, and people came. Also, I basically just stalked every single person that I know personally and said, "Get. Here. Now." All my friends from the restaurant industry, all the places where I worked, I just told them "Please come, we need you." And people came out, and we were really, really, busy.

Did you have to change any of the menu after you opened? Meghan: People will recommend a lot of things to you, and we've had a lot of people offer their opinions about a lot of things, but we've always said that we wanted to stick to the original concept, which we thought was very strong. And any time that we felt uncomfortable about any of the choices that we made, we went back to our business plan and re-read it. We've really stuck to our guns, and we've hardly changed the menu. Jeff: Our menu is purposely very country. It's not macaroni with five cheeses and a panko crust. It's Velveeta. Meghan: A lot of people hate our mac and cheese. We get horrible feedback about it from some people. Then other people are like, "Oh, this is like my Aunt Kim's mac and cheese." Jeff: Sometimes people would say, "Oh, you've got to have hamburgers. You've got to have french fries and chicken." But you can get a really great hamburger down the street. So for us, we aren't going to be everything to everybody. We're just going to focus on what we do, and try and do it the best.

Did the reviews bring people? Meghan: If the amount of business we had correlated to the press, we'd be busy all the time. But having lived in New York for ten years, I know that I'll read about something, and I'll store it in my mind, and I might not make it there for six months, but I'll make it there. So I think people trickle in all the time, like people that read Time Out seven months ago. You get there.

Did you slow down during the summer? Jeff: Yeah, we definitely had an ebb and flow. Meghan: The summer was not as busy as we thought it would be. We thought, "Oh, we're doing barbecue. We'll be packed in the summertime." But summers are tough in the restaurant industry. People leave town, and there are a lot of places where you can sit outside. So, we're going to try and do seating out front next summer. It won't be a lot, but it will be enough to feel like you can drink on the sidewalk. But we had a major uptick in January. January and February are really tough months, but we've just been jamming. Jeff: It's a really warm and cozy space, so when the weather's cold outside, people want to go to a place like that.

Would you want to do another restaurant? Jeff: Yeah. I don't know if it would be the exact same concept, but it might be a variation with a different kind of food. Meghan: We do talk about it. We talk about it a lot, because this atmosphere and our food are things that people feel a lot of nostalgia for, and it works. People really come here and they feel good, and we think there are other neighborhoods that could benefit from that, or even other cities for that matter. Who knows? We're young, we just got started, but absolutely we talk about it.

Does it feel like it's been a year? Meghan: Some days it feels like it's been ten years, and some days it feels like it's been ten minutes. We're just kind of riding the wave. We're really proud of this year, and we feel like we look at each other and say, "How did we do this?" Jeff: You have a long day, and you're like, "How did I make it through that day," and then you think about a whole year, and you've had a whole year of those types of days. But then it's kind of like a blur. We had a baby, we moved our apartment, and we got married last September. Meghan: The restaurant opened later than we anticipated, and the baby came sooner than we anticipated, so they sort of just happened at the same time, but we feel so fortunate to have both things in our life, and we're going to look back on this past year like, "How did we do that?"

All Editions of One Year In [~ENY~]