Share All sharing options for: Acme Invests in Food, Falls Short with Wine 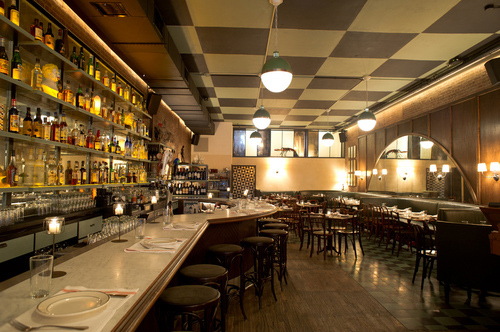 Diners in search of NYC’s most worthy restaurants have likely learned to be wary of those that are well connected to the world of fashion. For many of these restaurants – and you know who they are – the food is not really the point. It's all about the preternatural lighting, the décor, the pretty, well-heeled crowd, a dash of perceived exclusivity, and maybe a decent tuna tartare. And forget the wine list: it’s the afterthought to the afterthought.

Some restaurants, namely Keith McNally’s, have managed to offer a timeless brand of chic with food and wine that’s far more thoughtful than it has to be. Plenty others get lost somewhere in between.

Acme, the former Noho spot that for years pitched faux Southern food and tiki drinks to unsuspecting NYU students and don’t-know-better neighbors, has reinvented itself with the help of Jean Marc Houmard and Mads Refslund, one of the founders of Copenhagen’s famed Noma. Houmard is also the owner of several other restaurants including Kittichai, Bond St. and, perhaps most famously, Indochine—the aging archetype for restaurants long on glamor and short on substance.

While Houmard’s restaurants haven’t exactly been known for their kitchen prowess, his reinvention of Acme represents what is perhaps his most serious investment in food. It also acts as a handy indication of just how fashionable good food has become.

Unfortunately, the wine list isn’t subject to the same degree of attention. It is the work of former sommelier-cum-hospitality consultant Jean Luc Lametrie, who has been working with Houmard and his restaurants for more than eight years. His quest for Acme is simple: He wants a wine list full of small producers who farm responsibly, and he wants to achieve that without creating a list that reads like every other downtown restaurant’s. It’s a welcomed aspiration for those well acquainted with the same ten wines that appear on every other hip list in the city.

He succeeds in assembling a small collection of French wines from small distributors like Metropolis, who happen to rep a handful of interesting producers that lack the market visibility of other like-minded producers from importers like Polaner, Skurnik, Dressner and Rosenthal. Most of the wines are traditional and, at the very least, farm sustainably. So far so good.

But his vision begins to weaken with Champagne and implode with domestics and greater Europe.

One would assume that considering Lamertie’s penchant for rogue producers like Pacalet and Gonin in the French still section, that Champagne might logically draw from the ever-expanding grower Champagne market. But instead we get Veuve Yellow Label, Cristal, Dom, Heidsieck, and Gosset—all odd choices in the context of Lamertie’s stated quest to find small artisanal producers that you won’t see everywhere. C’est la vie, I guess. Champagne Huré, a smaller negociant, is a decent value by the glass if you insist on bubbly, but please note that it is served – predictably – in a coupe.

The domestic section finds itself staggering through the country’s more recognizable corporate wineries with markups hovering around three times the average retail cost. Exhibiting stylistic diversity by throwing in a few bombastic wines wouldn’t be anything to balk at, but the decision to cede more than a few choice spots to California corporate heavies like Chalk Hill and Goldeneye (Duckhorn’s Anderson Valley Pinot Label, mistakenly listed here as ‘Sonoma Pinot Noir’) makes the list feel as though it lacks conviction.

It’s also a useful example to how difficult it can be to put together a unique small collection. On a list of this size, wines placed without passion or belief stick out like goth kids at a high school dance. And there are enough of them here to make the list look as though it could double as death rock concert.

Montlouis, Domaine Saumon "Mineral +" Loire 2009 Chenin Blanc $62
Fairly new producer in the Loire that’s sure to make a bigger name for himself in the years to come. This bottling is a combination of several different plots in Montlouis (mostly limestone) and is meant to place minerality ahead of fruit. Though the wine does have some residual sugar, it does not sacrifice energy and transparency for girth.

Domaine Nicolas Gonin, Balmes Dauphinoise 2010 Persan $54
Vin de Pays des Balmes Dauphinoises is an obscure region within the Southern Rhone Valley that claims mondeuse and persan as indigenous. Both of these grapes are also grown just west in the region of Savoie, where mondeuse dominates the red category. This is the first vintage that Gonin made a 100% persan bottling and production is extremely limited. Rustic and earthy with an iron grip.

Bandol, Domaine des Luquettes, Provence 2006 $70
A small, traditional estate. The vines range in age from 50-100 years of age and cellar techniques are old-school. Great intro to the rustic, meaty wonders of mourvedre and grenache from Bandol.

Off The Beaten Track
Domaine Réaltière "Cante Gau" Aix en Provence 2009 Carignan Blanc Old Vines $62
Very rare bottling of 100% carignan blanc, which generally finds itself as a minority player in white blends. This is sourced from old vines that are farmed organically.

Break The Bank
Chassagne-Montrachet Blanc Philippe Pacalet 2009 Chardonnay $135
Pacalet is one of Burgundy’s rebels. He’s a nephew of Marcel Lapierre and one of the icons of the natural wine movement in France. This is the first year he bottled a Chassagne Blanc and supplies are quite limited stateside. One of the few top end wines worth springing for.

WTF?
Ventana Vineyards, Carmel Valley 2008 Chardonnay $59
Not only is this wine marked up far too high (it retails for around $12 at any number of CA supermarkets and around $18 here in NY) it’s not a distinctive wine. There are simply a number of more interesting California chards that could sit in this price range.

Goldeneye Sonoma Pinot Noir 2008 $138
Goldeneye is Napa heavy Duckhorn’s Anderson Valley pinot project. Not only is the wine incorrectly listed as Sonoma, it’s also wearing another high mark-up. This one of several inclusions of a large-scale corporate American winery on a list that leans almost entirely on small-production, more traditional European wines. While diversity is great this dichotomy reads like a crisis of vision.
[Photo: Krieger]