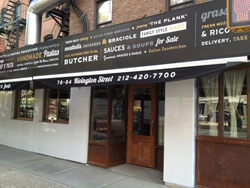 Last night’s Community Board 3 meeting was short and sweet, coming in at just under three hours thanks to a few scratches, a no-show, several incomplete applications, and a lot of quick consensuses among the board. But, because this is CB3, the discussion was lively and sprinkled with a fair amount of drama. We've already dealt with Porsena, Mission Chinese, and the new concept for the old Holiday Cocktail Lounge space. Here's the rest:

1) The first item on the agenda was the most hotly contested of the night. La Vie, the restaurant/lounge on 64 E 1st Street plagued by violence and sound violations, started things off by bringing the board a notice of change in their management. Mr. Joseph Shienouda, who now owns 50 percent of the company, was brought in to have an active management role with hopes of changing the way the company operates: more security, less violence, and more integrity. But last night, the community wasn’t buying it. Three people from 62 E 1st Street, the building next door to La Vie, came to voice their complaints about the establishment including its operating as a nightclub, vomit on their front stoop most mornings, their “earth-shaking bass,” and intimidation by staff members.

CB3 co-chair David McWater warned Mr. Shienouda that he was purchasing a “damaged asset” that’s pretty much one problem away from being shut down and hoped he had been given a good deal. After nearly 45 minutes of lively back and forth, the board unanimously voted not to endorse La Vie’s corporate change due to lack of information about the new management and its intentions. The board also put together comments to send to the SLA reaffirming their refusal to renew La Vie’s liquor license.

2) Ryan Chadwick, Callum McLaughlin, and Gavin McLaughlin, the three brains behind the Gray Lady (so named as a tribute to Nantucket), a New England raw bar, were present to explain their proposed business plan. The plan is to open a sustainable seafood restaurant with all seafood privately sourced from Maine. They requested to transfer the pre-existing full liquor license from the previous tenant (White Slab Palace) and extend their hours until 2AM seven days a week. The board awarded them a liquor license with the stipulation that they close by midnight Sunday through Thursday and 2AM on Friday and Saturday.

3) Frank Prisinzano, the owner of the Italian restaurant empire that includes Frank, Lil' Frankies, and Supper, came to the board on behalf of his restaurant Sauce to request an upgrade to a full liquor license, proposing table service only (meaning you would order form a server, not at a bar). Although Frank says that the focus of the restaurant is on the food, many of his loyal customers have voiced a desire for a drink to end their meal and feels that it would “add to the experience.” The board felt that Sauce is a serious restaurant and Frank is a well-respected chef and restaurateur, so they approved his request with the stipulation that he continue to operate as an Italian restaurant offering sit-down service, take-out, and now delivery under its current hours (6 AM to 4 AM) and only playing recorded background music.

4) Bahr Rapaport, with a background in hospitality and food and beverage, asked the board to approve a liquor license for his proposed family-style Mediterranean restaurant, Mundo New York, and to permit him to extend the space’s hours. The previous restaurant, Olivia, was open between the hours of 9AM and 12AM Sunday through Thursday and 9AM - 2AM Friday and Saturday but Mr. Rapaport requested to extend the hours to 7AM – 12AM and 7AM – 2AM respectively. His intention was to create a place for people to go at all hours of the day, adding to the neighborhood’s morning (breakfast, not late night snack) scene. However, a resident living above 207-213 Allen Street came to plead his case for not extending the restaurants hours; the current owners play loud music at all hours of the night and he, with a 9 month-old daughter, has had it. While he is willing to give Mundo a try, he believes they need to earn the extended hours. The board urged Mr. Rapaport to get to know his neighbors and establish a good rapport with them. The proposal for the liquor license was approved while the request to extend hours was denied for the time being.

5) RGD Wine & Dine Group is bringing an Italian restaurant (name to be determined), to the old Resto Leon deli space at 351 E 12th Street. Roberto Deiaco, currently the Executive Chef at Armani/Ristorante 5th Avenue, will be the chef behind this project. The board approved their request for a wine and beer license with the understanding that they would only operate between the hours of 5PM and 12AM during the week (not during school hours as PS 19 is right across the street) and 11AM to 12AM on weekends.

6) Robert Lebrini came to the board on behalf of Lebrini’s Pizzeria, which has taken over the former Moon Pie Pizzeria space at 31 Avenue C, looking to get a license to sell beer and wine along with their pies. This was an open and shut case: two years ago when they took over Moon Pie’s assets, Lebrini’s couldn’t afford to transfer the liquor license. Now that they can, and given the fact that Moon Pie previously served beer and wine with no community complaints, the board quickly approved this proposal.

7) Yong Fa Restaurant, which is taking over the old O.G. space at 507 E 6th Street, was the first incomplete proposal to reach the board. Two owners of this full-service Asian restaurant showed up looking for a full liquor license, but due to a lack of community outreach, they left empty-handed. They will be included on next month’s agenda if they are able to resubmit a complete application before then.

8) The board approved Los Feliz’s request for an alteration to their liquor license. The proposal was to add two bars to the taqueria/tequileria located at 109 Ludlow Street; one will be upstairs and one will be located on the lower level. No real details of the space were shared other than that one bar will have four seats while the other will offer six.

9) Joey, the owner of Jebon Sushi located at 15 St. Mark’s Place, pleaded with the board for an upgrade to a full liquor license. He argued that without the upgrade his six year-old business wouldn’t be able stay afloat given the rising cost of operation and the serious competition in the area. Susi Schropp, president of the 8 St. Mark’s Tenants Association, led the charge against the proposed upgrade, asking the board where they would draw the line. Approving Joey’s request for a full liquor license would create a slippery slope, opening up the door for all other bars lacking a full license to make the same request, she argued. The board discussed whether a full liquor license would provide any benefit to the community and after noting that the neighborhood already has 22 licensed establishments (11 of which have a full license, 9 wine and beer only, and 2 inactive but existing licenses), the board denied the application.

10) Mediterranean Grill, a full-service Mediterranean restaurant, was awarded a wine and beer license, as long as they agree to serve food until closing at 5 AM and maintain a closed restaurant (that means no more sidewalk café space will be available at 128 1st Avenue).

11) La Gente, a restaurant/lounge to be located at 303-305 Broome Street, asked the board for a full liquor license. The lounge will be located in the basement and divided between two rooms. The restaurant will be located at ground level and will serve food until 2AM. The board awarded La Gente a license on the stipulation that they agree to limit their scheduled DJ performances to no more than three times a month and to install sound proofing and implement security as needed.

12) Sahara Citi brought the board its second incomplete application of the night. The owners stated that they wanted to get the ball rolling to ensure they received a liquor license in time for their opening. However, because they did not provide adequate information and are still in the construction phase of development, board member Ariel Palitz suggested that they take their time and “do things the right way” because they have more than enough time to get things approved. They will be added to the schedule again once they have submitted a complete application. The restaurant will be located at 137 E 13th Street.

13) Sao Mai, the Vietnamese restaurant replacing Quantum Leap at 203 1st Avenue, was approved for a wine and beer license. The board approved them as long as they agree to keep the same operating model as their predecessor. Their hours are 11AM – 11PM seven days a week and will serve food until closing.

14) The Delancey Lounge and Grill, located at 148-150 Delancey Street, asked the board to approve their request for a full liquor license. They plan to operate as a full-service restaurant on the ground floor of a newly planned Holiday Inn seven days a week between the hours of 6:30AM and 11PM. The board approved their request on the condition that they do not deliver food to the hotel rooms.

15 Porcellino is replacing Zerba at the 308 E 6th street location. The owners approached the board for a transfer of license and assets with the plan being to open a full-service Italian restaurant. The board approved with the agreement that the restaurant only play background music, have a closed exterior, and serve food until closing. The restaurant’s hours will be 12PM – 2AM Sunday through Thursday and 12PM – 2AM Friday and Saturday.
—Claire Nugent
· All Coverage of Community Boards [~ENY~]