Share All sharing options for: This Month in New York City Dining, 1995

Occasionally, we like to look back on other periods of New York dining. Here now is a rundown of what was abuzz in the city 17 years ago: February of 1995. 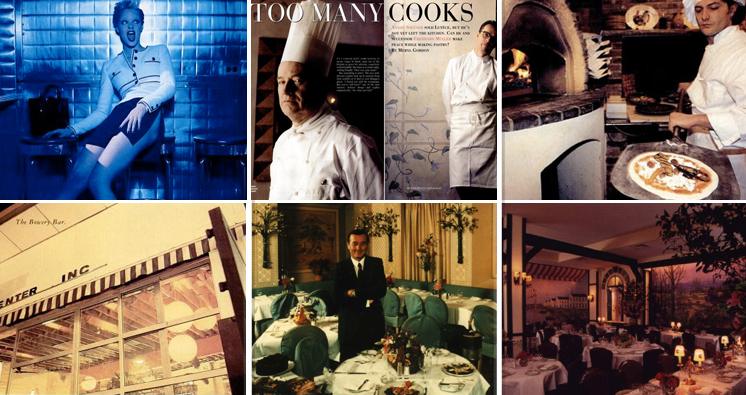 In February of 1995, the city was preparing for a smoking ban that was about to go into effect. Under the new law, restaurants with more than 25 seats could no longer allow smoking in their dining rooms (lighting up was still permissible in bars and smaller restaurants). This month in '95, the owners of Bowery Bar finally ended their lengthy battle with the local community board and neighborhood alliance. The groups originally wanted the club to operate under a special permit, for fear that the bar and other similar projects "could change NoHo from a refuge for artists and light manufacturing to a trendy neighborhood flooded with late-night revelers." Elsewhere in the nightlife universe, Nello Balan, Giuseppe Cipriani, and Mickey Rourke announced plans for a new bar in Midtown.

[Bowery Bar, Sirio at the original location of Le Cirque] 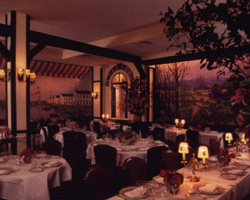 This month in 1995, news broke that the Mayfair hotel was in deep financial trouble, and that its destination restaurant, Le Cirque, would eventually have to find a new home (the move finally happened five years later). The original location of La Cote Basque served its final meal this month — the French fine dining restaurant moved one block west a few months later so that the Disney Store could set up shop. And in late February, the Times took a look at the table hierarchies at a handful of NYC hot spots, including Remi, The Four Seasons, Monkey Bar, and The Russian Tea Room. [Photo: La Cote Basque]

Just in time for Valentine's Day, New York offered a guide to meeting single people in the city. The mag recommended going to Soho Kitchen & Bar if you wanted to schmooze with rich fashionistas, Eureka Joe on 22nd Street to meet "Thermal wear-clad Pearl Jam wannabes and writers," and Cafe Tabac if you aspired to have a close encounter with one of "the most sophisticated and gorgeous lesbians in town."

Ruth Reichl went on a tour of Flushing's Chinatown with Ken Hom, the cookbook author, TV show host, and all-around expert on Chinese cookery. The critic also checked out The West 63rd Street Steakhouse, a glitzy restaurant with okay food and a room that was "cozy as a millionaire's library." Ms. Reichl awarded two stars to Salaam Bombay, and three stars to March, the American restaurant from chef/owner Wayne Nish. Gael Greene visited two Southern Italian restaurants this month: i Trulli, and Ponte's. She loved the menu and the vibe at the former, and thought the food at the other place was good, if a bit pricey.

Odds & Ends: New Life in The MePa, Shakeups at Lutece

[A fashion shoot at Florent, the two chefs of Lutece]

In February of 1995, the Times discovered that the The Meatpacking District was quickly becoming a hot new dining and nightlife destination. A waiter at Florent profiled the restaurant's clientele:

The article also name-checks several other clubs and restaurants that are now long gone, including The Cooler, Jackie 60, The Lure, and The Vault.

New York ran a fascinating article about life at four-star French gem Lutece after its chef and proprietor, Andre Soltner, sold his baby to the Ark restaurant group. Soltner was still in the kitchen and on the floor most nights, but the new owners brought in Eberhard Muller, a young gun who came from Le Bernardin, to work alongside him as the executive chef. There was some tension between the two of them, with Muller noting, "Every time I get a little bit of my way...Andre is sad because he has lost another thing that he cherished."

Some people loved the idea of two four-star chefs sharing the work in the kitchen, but others, like Julia Child, found that the changes had created an uneven experience. Ms. Child remarked: "The food was good but not outstanding. It's going to be difficult for Eberhard until he really takes over and there isn't someone peeking over his shoulder."

· All Previous Editions of This Month in Dining [~ENY~]