A Guide to the Private Clubs and Restaurants of NYC

Share All sharing options for: A Guide to the Private Clubs and Restaurants of NYC

A lot of New York restaurants are hard to get into, but only a handful of places in the city require background checks, referrals, or special membership cards to enter. Here's a guide to 10 private New York bars and restaurants, with information about where to go and who to talk to if you want a table. 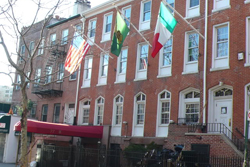 10) Tiro a Segno: This private Italian-American social club, which occupies three brownstones on MacDougal Street, has something you won't find at any other restaurant in New York City: an active, wood-paneled shooting range in the basement. Upstairs, there's a bar and several dining rooms serving a wide array of traditional Italian American food. Tiro A Segno (which means "shoot the target") is strictly members-only, although they sometimes bend the rules if you want to buy-out one of the banquet rooms for a large event. But if you want to become a member for life, you must be nominated by a current member, and it certainly helps if someone in your family is Italian. For more on the club's 124 year legacy, check out their official site. (Photo) 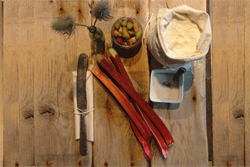 9) Brooklyn Edible Social Club: About twice a month, this culinary collective holds small dinner parties in an apartment in North Brooklyn. They keep the identity of the chef tightly under wraps, but the club's website notes that he previously worked at The French Laundry and Gordon Ramsay at The London. A recent meal included dishes like poached dover sole with spinach sauce verte, braised pork shank with king oyster mushrooms, smoked apple velouté, and chevre panna cota for dessert (check out one blogger's account of a BESC dinner party here). Each meal includes wine pairings, and all the food is made with locally-sourced ingredients. To lock down a reservation for an upcoming dinner, e-mail bkediblesocial@gmail.com. If everything goes according to plan, you'll receive an e-mail to confirm availability, plus information about how to pay online, in advance of the meal. (Photo) 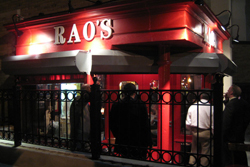 8) Rao's: This 116-year-old East Harlem red sauce joint is not technically a private establishment (you can walk in and get a drink at the bar most nights), but actually eating here is next to impossible unless you know someone who "owns" one of the ten tables in the dining room. They're redistributed every year, but mostly to the same people — a mix of celebrities, politicians, bankers, and people of indeterminable power and influence in the city. The best way to score a table at Rao's is to find someone who's actually been there — bankers and people in the entertainment industry might be a good place to start — and then ask them if they know someone with a table that might be willing to make a reservation for you. For more on what goes on once you sit down to eat, check out Mimi Sheraton's three-star review from 1977 (subscription reacquired). (Photo) 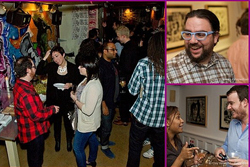 7) Midnight Brunch: This supper club, which takes place every month or so at an undisclosed location in Brooklyn, is not super-exclusive by New York standards, but you still need to send a formal request for an invitation, and space is always limited. All the dinners take place in the middle of the night, and feature a cocktail hour with canapes, followed by a three or four course meal of ethnic brunch foods. Last month's event was based around a menu of gluten-free Thai fare, and the upcoming meal is an "Ode to Brazilian Carnival." Most of the dinners cost around $100, but they include plenty of food and booze. (Photo) 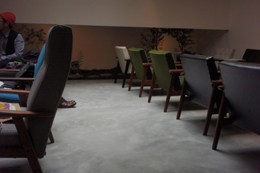 6) Bohemian: This "secret" bar and restaurant in the back of a Noho butcher shop serves killer Japanese food in a sleek, relaxed dining room. It's not absolutely impossible to eat here — some critics have even reviewed the place — but acquiring a reservation is not easy. The best way to score a table is to get the private phone number from someone who has dined here, and try your luck with a reservationist. They will ask you for the name of the diner who referred you, and if they can find that name in their reservation log, you should be in the clear. If that doesn't work, you can send a written plea to ny-info@playearth.jp with “Visit Inquiry” in the subject line, although this method has a very low success rate. 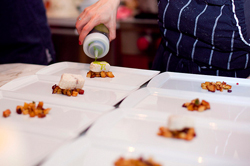 5) Bite Club NYC: Bite Club NYC is an underground, members-only supper club that hosts about two or three dinners a month at different apartments in Brooklyn. The chefs have no formal restaurant training, but their menus usually feature elegant ingredients and complicated preparations. One recent meal included dishes like sous vide egg over roasted farro, caramelized foie gras with poached pear, arugula soup with salmon roe, and a Nutella tart with Mast Brothers ganache. Membership is granted via an online application, where you must list your basic contact info, occupation, favorite food, as well as the name of the Bite Club member who referred you. The site notes: "There are no specific criteria that define or limit our members. For the most part we only ask that they love great food and good company." (Photo) 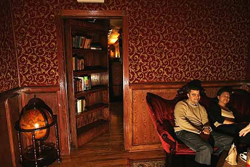 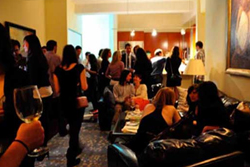 3) Apt4 Food and Wine: Apt4 is a supper club from a team of New York media players, with food from Jay Chan, a chef who previously worked at Mas and Mile End. Many of the dinners are formatted as five course-tastings with wine pairings for about $90 a head, but the group sometimes holds large cocktail party-like events with passed canapes. Occasionally, the dinners are open to the public via sites like EventBrite, but most of the time you need to submit a request for an invite on their website, and wait for a response. Note: this sometimes takes months. (Photo) 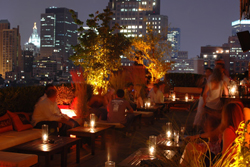 2) A60: 60 Thompson's rooftop bar offers spectacular views of downtown Manhattan, plus very good drinks and Asian bites from the kitchen of Kittichai on the first floor. It's cooled off a bit over the years, but on an average summer night, A60 is still filled with downtown movers and shakers with those fancy membership cards. Access is granted only to card-carrying members and their guests, as well as people who are staying at the hotel. Note: Last year, management announced that they were opening A60 up to non-members "based on availability," but it's still somewhat pointless to go there unless you know someone with a card. 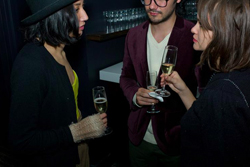 1) Parlor: This year-old Soho restaurant, bar, and wine cellar is practically impenetrable. When Parlor opened, the management passed out about 100 membership cards to friends and family, and unless you get an invite from one of the card-carrying few, the only way to gain access is to fill out a membership request form online. Within 48 hours of applying, you'll receive an e-mail with either a denial or a confirmation of membership, with a list of club amenities. Parlor frequently hosts art and fashion-world parties, Scotch tastings, and special dinners, and members can store wine bottles in their cellar. The space can be rented out for private events, but the application process is exactly the same as requesting a full-time membership. (Photo)