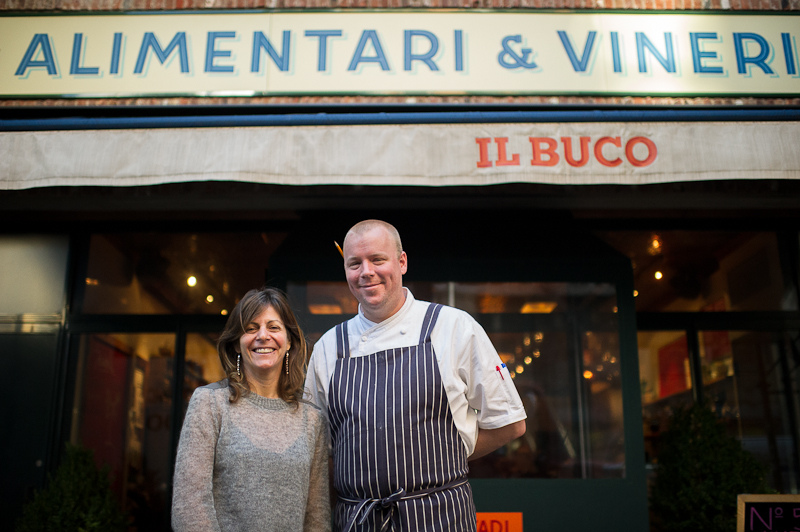 [Daniel Krieger]
Il Buco Alimentari e Vineria is many restaurants rolled into one. In the morning, it's a casual neighborhood cafe and bakery. In the afternoon, it's a sandwich shop and a great place for a long lunch. And at night, it's a bustling bar and dining room serving inventive Italian fare. This is an ambitious project, but restaurateur Donna Lennard and chef Justin Smillie make it work on every level, and they are constantly adding new elements into the mix. Eater recently chatted with Donna and Justin about the first year of Il Buco Alimentari, and what they've got planned next.

How has the menu changed over the last year? Donna Lennard, owner: The vision is the same and it gets a little stronger all the time. There's not a special menu every day. I can come from the market, and Justin will take something off and throw something new on. When he gets tired of something or he has another idea, we'll say, "Let's take that off, and let's replace it with this." Justin has a lot of creative freedom, and the customers don't really know what to expect when they come in. There are the base items, the foundation is there, but there are always some little surprises, which I think is nice.

Justin, what are you most excited about in terms of the menu? Justin Smillie, chef: We started out with a crispy baccala last year, and now we're doing a baccala carpaccio. So, it's moving through or studying the ingredient piece by piece and seeing what it can become. The Italian pantry, or the base, is always the same.

Did you do any research prior to opening this restaurant? Did you think about specific regions or styles of Italian food? Justin: I think we're always doing research. The work that was done at Bond Street really made it an easy transition. I had started there for a couple of months before we were open here, so that was the base homework. Then I was feeling the place, seeing the toys I had to play with. Donna: What's really exciting about Justin's food and interesting to me is that he hasn't spent much time in Italy, but he has a real connection and great instinct for Italian cuisine. He knows what cacio e pepe is and what the classic dishes are, and he's able to really execute them the way they taste over there. But also part of it is having the ingredients here — having the olive oils, having the tomatoes, having those pieces. So, when you have these products, you get a more authentic outcome. And I think Justin is always looking and exploring his own creativity and what's out there, and trying to find a way to bring it together and get something that's exciting.

When I start getting bored, everybody else notices. I start getting a little itchy. It's easy with Justin, because he starts to get itchy before I do. It's fun. I can't stand to go to restaurants where it's the same menu for 20 years. Some people love that. They like to know they are going to go to that place and see that menu all the time. But I'm not that kind of person, and he's not that kind of person, so it's a good match.

Did your stress level change at all after you got the New York Times review? Justin: Easy peasy. It took a minute to get used to. Donna: Our reservations doubled. When that review came, it threw us into a whole new realm. Thank goodness, because it pushed us into our business plan. We needed to do these kinds of numbers. In some ways, Justin was prepared because that's what he wanted to do. But it's one thing to dream the dream and actually having it arrive on your doorstep the minute you wake up the next day. I got on a plane the next day and flew to Thailand for two weeks, so I came back to an entirely different business. People had to be hired. We had to quickly get up to speed, get people trained, and figure out payroll on the fly as this was happening.

Did you have to bulk up the kitchen staff after that? Justin: Yeah, I mean, the first three months, we worked seven days a week with a very small crew. And the funny thing is that once you do have this business and you have this small crew, the people who come in are terrified because you are doing so much business with so few people. That was the scary thing for us, but it all worked out. 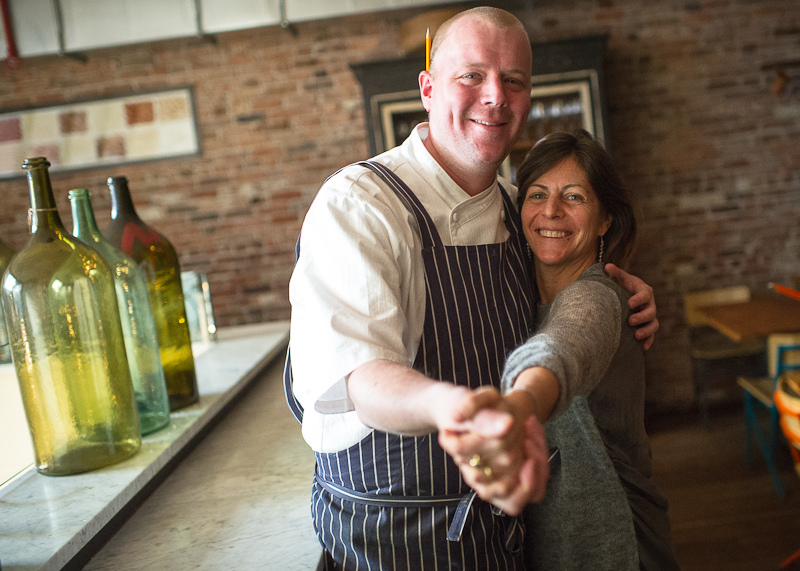 Sometimes, hot restaurants slow down a few months after a great review, because the foodie set moves on to the next thing. Was that your experience? Has business stayed strong ever since? Donna: Il Buco was never that kind of a restaurant. We're not appealing to a trend. This place has a little more modern edge, so someone might say that. But the base is about something that I think is really solid. The foundation here is about the ingredients and the food and a commitment to a certain way of presenting it. And I really believe in that, and I don't compare myself to a restaurateur in a classic way. It's about really creating a place for people to feel good and eat well and know they can count on a certain quality or an experience when they come in. And it's about getting that experience to be consistent.

We have a lot of new people that have come here, but all of our customers at Il Buco have been here or come here, and they're still creating part of that strong warm base of support. The summer slacked off a little bit, for sure. It's always a little quieter and we had that moment of, "Are we losing it? Is this a bad sign?" And then September came and we roared. It's been super busy, and we're back to really strong numbers. Obviously, after the hurricane, then the election, things were a little quiet. But last night, we were back to business as usual and hopefully we can keep that up.

The short rib dish has gotten a lot of attention. Is that the number one dish that people order these days?
Justin: We sell a lot of short ribs. Like 450 plates a week.

What else are you really excited about on the menu right now? Justin: I love the porchetta. I love it all. Also, we were doing a spit-roasted duck a couple of weeks ago on the rotisserie. The baccala carpaccio right now. I'm happy the old quail is back. We're playing around with smoking some sausages right now.

What's next for you guys? Are you committed to this location and this operation? Would you want to do a spinoff of Alementari? A sandwich shop or something like that? Donna: That is about the furthest I would go. And I promised my husband, "No more restaurants for me any time soon if ever." It would take a lot for me to do another restaurant again. This was a really big project for me after 18 years, and I have a 7-and-a-half-year-old son. For seven years, I've been taking a step back from the business, and Il Buco has been running so much on its own with just my little fingers coming into massage here and there. So, taking the time was a lot for me. Designing and conceptualizing all the different departments...each thing required a lot of time and attention here and I think it will be another year before we have this place where we want it.

From the outside people say "Oh, it's selling." But there is so much potential in here that we still want to exercise, and one of the weakest sections for us right now is the store. We have one of the best bakers around, and the fact that we don't have a line out the door of people coming to buy this bread is disappointing to me. We're doing great here, but what we potentially have there with the salumi and bread and cheeses and all the little goodies is not yet being fully realized. It's a lot to pay attention to. We've got scaffolding on both sides, and we didn't have our outdoor cafe all summer until September. So, that's something that we'd like to do, and maybe eventually do some wholesaling of our salumi and bread outside of this location.

Does it feel like it's been a year here? Justin: It's been a good year, very fulfilling. Donna: It's been a flash. In the one sense, it feels like more than a year, like we've been here for longer. On the other hand, October to October went like that. Justin: I look at my baby, Oliver, and I'm like "Oh my god you're a year now." Donna: His baby was born two weeks before we opened. Justin: It was something.