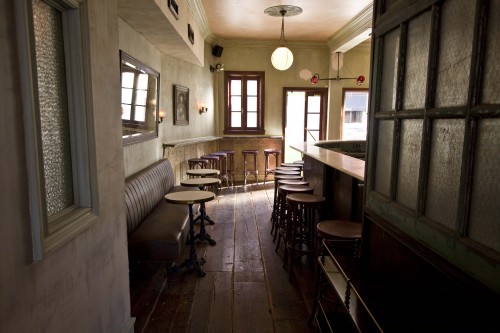 Just five years ago it would have been hard to find a bar that took wine as seriously as it took cocktails, and vice versa. But if the newly revamped beverage program at Williamsburg's Maison Premiere is an indication of anything, it's that restaurants and bars are realizing that the same people who like interesting cocktails also like interesting wine.

It opened last year as a cocktail and oyster bar with an inconspicuous entrance marked only by a little sign that read: "Bar and Oysters." For a while that was accurate. But in August Josh Boissy and Krystof Zizka hired chef Jared Stafford-Hill—formerly of Adour and Gramercy Tavern—and rolled out a full menu and a proper wine list to go along with it. Nearly overnight, Maison Premiere had gone from cocktail and oyster bar to cocktail bar, oyster bar, wine bar, and proper restaurant. And that sign now seriously undersells the ambition inside.

"About five or six years ago, I became influenced by David Lillie [of Chambers Street Wines] and Joe Dressner," says Zizka, who is a partner and the beverage director. "I started shopping at Chambers Street and buying inexpensive Loire wines. They really grabbed me and got me excited about wine—wine that I could actually afford."

Along the way Zizka met Josh Boissy, who lived above Le Barricou on Grand Avenue in Williamsburg. When the restaurant ran into some financial troubles, Boissy became a partner and brought Zizka on to revamp Le Barricou's wine list.

"I fell in love with French wine there," he says. "And I became influenced by lists like Balthazar's."

The Balthazar influence is all over Maison Premiere. But as it applies to the wine list, Balthazar's brasserie list has been reimagined for a younger, more adventurous audience—but not by offering a full bow to the fringe. The classics, particularly Champagne and Burgundy, make up the core of the list, which has expanded from about a dozen selections to more than 150 from France, with a small smattering of Spanish wines and sherry.

On the top end, Champagne and Burgundy offer both vintage depth and value if you are inclined to spend upwards of $100 or more. If not, there is more intrigue around $60 than you'll find in most lists in both Manhattan and Brooklyn combined. In the white department, head straight to the selection of 17 Muscadets, some with a few years in bottle and all of them (save one, a mag of 2011 Luneau Papin "Clos de Allées" at $85) under $70. Or visit the Loire Valley and Beaujolais if you're looking for red on a budget. Both sections are expertly chosen.

Add all of this to a terrific cocktail list under the supervision of bar manager Maxwell Britten and you have one of the most exciting and complete beverage programs in Brooklyn and, I'd venture to say, most of Manhattan.

Bang For Your Buck

Peillot, Montagnieu Brut (Bugey) $45
Montagnieu is a small village in the region of Bugey, which is wedged between the Jura and Savoie in France's southeast corner. Here, most of the wine production is white or sparkling wine. This is easily one of the best values in sparkling wine currently on the market. It's a blend of mostly jacquere and altesse, two white grapes native to the region, as well as a dash of the red grape mondeuse. Brisk and lively, with nice weight and yeastiness which comes as a result of a year the wine spends on the lees (dead yeast cells).

Muscadèt Serve Et Maine, Domaine de L'Ecu, "Gneiss," 2010 $45
Guy Bossard of Domaine de L'Ecu is one of the finest producers of Muscadet in the Loire. This is a fine example of the energy behind the melon de bourgogne grape when taken seriously. Gneiss is one of a great diversity of soil types in the region and tends to yield wines with intensity and weight, but not without the cut and minerality that makes Muscadet great. The 2010 is a particularly wonderful vintage for this wine.

Chablis, Domaine de Pattes Loup 2010 $60
Thomas Pico's Domaine Pattes Loup is one of the most exciting new producers in Chablis. Pico was a mentee of Alice and Olivier De Moor, who have become cult stars for their similar approach production using low yields, indigenous yeast, and neutral wood. This vintage shows off a fleshier side of Chablis, but still has the acidity to back it up.

Rias Baixas, Benito Santos, "Vinedo de Bemil," 2007 $64
Benito Santos was one of the most important grower/producers in Rias Biaxas. The estate continues to farm organically, use native yeast, and keep sulfur levels low. The Vinedo de Bemil comes from a property a little under 10 miles from the sea that contains a high limestone content. The vines are young, but yield a powerful wine that spends 36 months on the lees before bottling. Yeasty and tropical with the acidity to counter its weight.

Fleurie, Domaine Chignard, 2010 $51
Fleurie, as an appellation, was a standout in the 2010 vintage, which has generally shown a bit more tension and minerality than 2009. Chignard is always a consistent standout with one of the best properties in the area. This is classic, joyous Fleurie with more complexity than one might expect from a base wine.

Grand Canaria, Frontón De Oro, "Tinto" 2009 $46
One of the best values, consistently, out of the Canary Islands. This comes from high elevation, terraced vineyards (many more than 3,200 feet) on the largest island in the chain, Gran Canaria. It's raised in neutral barrels for three months before several years in bottle. It's spicy, elegant, and floral with plenty of blue and red fruit.

Saumur Champigny, Filliatreau, "La Grande," 2009 $44
Great introduction to the Saumur expression of cabernet franc from a large, but high-quality producer. Plush cherry fruit with a touch of herbs and pepper. Versatile.

Chignin-Bergeron, Denis & Didier Berthollier, Vielilles Vignes 2011 $35
In the Chignin cummoune of Savoie, the local name for roussanne, a grape that's found fame in the Rhone, is Bergeron. Here the climate is cooler and the alpine influence gives the typically hefty grape a bit more lift. Light, fresh wine with some of the fruit density that one would expect from old vines. Drinks well above its price point.

Off The Beaten Path

Cangas, Monasterio de Corias, Tinto 2008 $42
This is a relatively new estate out of Asturias, a small region to the east of Galicia that's home to less than 10 wineries (it's better known for cider than wine). Monasterio de Corias is a small, family-owned winery that is all about traditional winemaking applied to indigenous varieties. This is a blend of mencia, the star grape of Bierzo and Ribeira Sacra, and carrasquin and verdejo negro, two obscure varieties native to Asturias. Bright, aromatic, unique.

Rias Baixas, Do Ferreiro, 2010 $46
Perhaps Spain's most well-known albariño producer, and still one of its best. This is the estate's cuvee sourced from younger vines (which here means 15-50 years old), but still shows plenty of depth, concentration, and intensity. Mineral, floral, and tropical.

Sancerre, Edmond Vatan, "Clos la Neore," 2010 $125
In my opinion, Vatan represents the absolute apex for the sauvignon blanc grape. These wines are highly sought-after, but tightly-allocated. This is an incredibly fair price on a classic vintage of what is truly one of the great white wines of the world. Concentrated, minty, with an intense, salty minerality.

Agrapart, "Avizoise," 2005 (Avize) $168
Sourced from Agrapart's oldest parcels in Avize. The soils in these two parcels have a high clay content, which translates to a richer expression of Chardonnay. This is creamy and round, but still has the cut to balance it. Drinking very well at present.

Chambolle Musigny, Dujac Fils & Pére 2006 $135
This is a solid deal from one of the great Burgundy estates. Village wine from Dujac is generally a notch (or 10) above most of its counterparts. This is always on the fleshier side for Chambolle and from a more open vintage like 2006 should drink very well right now.

· All Coverage of Maison Premiere [~ENY~]
· All Editions of Decanted [~ENY~]
[Photo: Will Femia]