A Tour of Jersey City & Hoboken Restaurants After Sandy

Share All sharing options for: A Tour of Jersey City & Hoboken Restaurants After Sandy

Throughout the next few weeks, Eater will be taking a close look at how restaurants are faring in the parts of New York that were hit hard by Hurricane Sandy. Next up: Jersey City and Hoboken in New Jersey. 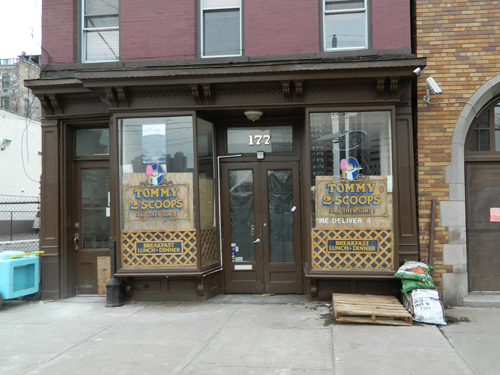 Jersey City and Hoboken weren't flattened like Atlantic City, but Hudson County received its share of damage from Hurricane Sandy with significant flooding that debilitated the PATH, building fires, and power outages that spanned over two weeks. Over a month later, most businesses are open, but it's not all back to normal. The high tide claimed restaurant supplies and the homes of residents living in basement units. The Hoboken and Exchange Place stops on the PATH are still down, making it challenging for employees to get to work and difficult for customers from Manhattan and parts of New Jersey to check out the local dining scene. Here's what the scene looked like last Saturday: 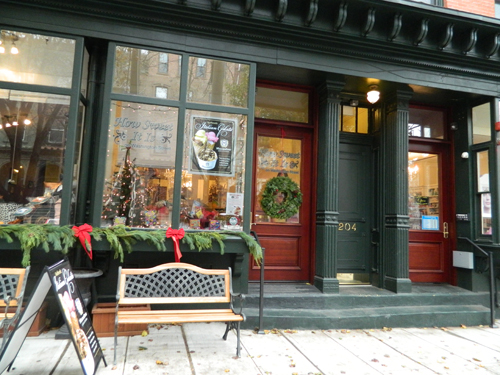 [How Sweet It Is]

Despite its proximity to the water, Laura Sugrue of candy store How Sweet It Is on Washington St. said that aside from the loss of her gelato stock from lack of power until Wednesday, her shop was physically fine. Greater damage was done farther inland on Grand St., an area dense with restaurants. 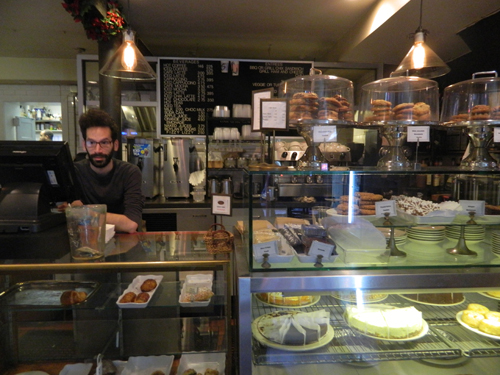 Beechwood Cafe sits in on Grove St., a popular brunch area in Jersey City. The shop serves breakfast and lunch during the day, but manager Claire Hong said a lot of their business comes from the caf&eacute, specifically the espresso sales. Though the restaurant's power was restored in six days, the espresso machine was out of commission for two weeks because of ruined supplies. Hong said the basement, which stored all of the restaurant's paper products and dry goods was completely flooded. She estimated at least $30,000 worth of damage, and that's not including the loss of business. 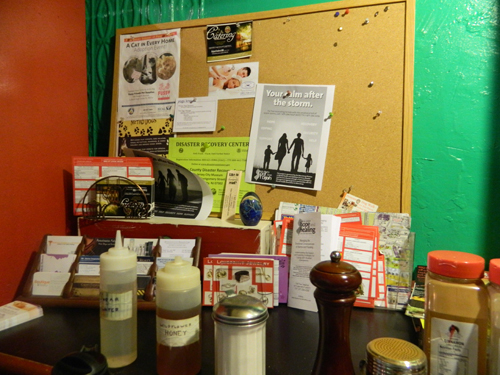 Legal Grounds Coffee Company on Grand St. was closed for two and half weeks and also suffered from major flooding in its basement. A majority of the cafe's supplies — like to-go cups, coffee beans, and brewing equipment — were ruined by water damage. In addition to losing revenue while the shop was closed, employee Alexis Mendoza said many of their regular customers are displaced or not coming in because they are repairing their homes. "We let people stay here for a couple of hours while they're waiting for the electrician," Mendoza said. The café reopened two weeks ago after power in the area returned and the store could be cleaned up. 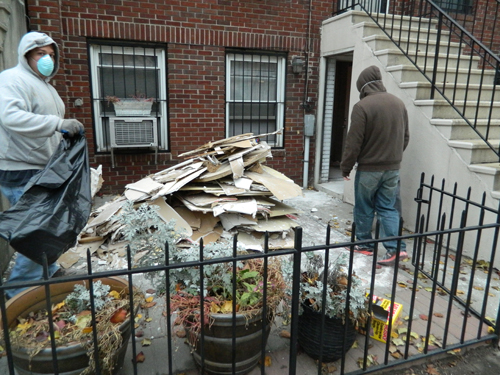 Natalia Caicedo, owner of Korean crepe shop Kraverie on Mercer St., said that in addition to losing at least $15,000 in damaged equipment from the flooding, business has been slow. Like Mendoza, Caicedo suspects many customers have moved out of the area because their homes were destroyed. While the buildings weren't flattened like in Atlantic City, basement units, which are the most affordable housing option in Jersey City, were waterlogged and often unsalvageable without a complete renovation. Down Grand St., nearly every home had a pile of torn out dry wall. 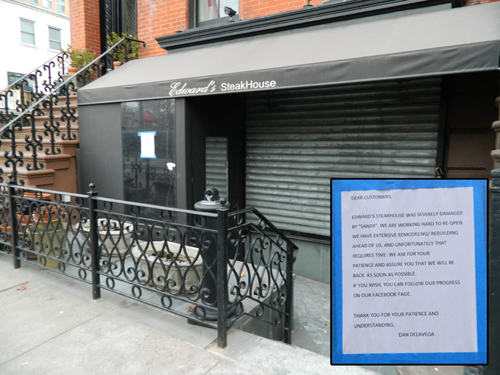 Low-lying restaurants fared the worst. Edward's Steakhouse, a restaurant on Marin Blvd. located in the lower level of 1870s brownstone, still hasn't gotten back on its feet. Owner Dan Delavega wrote on a sign posted at the storefront that his store requires "extensive remodeling." On its Facebook page, the team wrote that the restaurant will definitely reopen, though a specific date is uncertain. 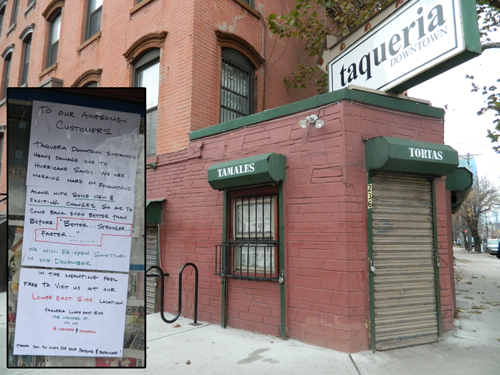 On Grove St., Taqueria Downtown remains shuttered since the storm. A sign on the newspaper-covered window said they plan to return in mid-December "with some new & exciting changes." The Mexican restaurant's second location on Orchard St. on the Lower East Side, which still serves customers, said renovations to the Jersey City location haven't started yet and rebuilding may take longer than anticipated.

Mendoza from Legal Ground Coffee said the shop's neighbors on York St., Tommy 2 Scoops, likely won't come back until February. The neighborhood gelato store, which opened in July 2010, looked shrouded without any sign of when it would reopen. 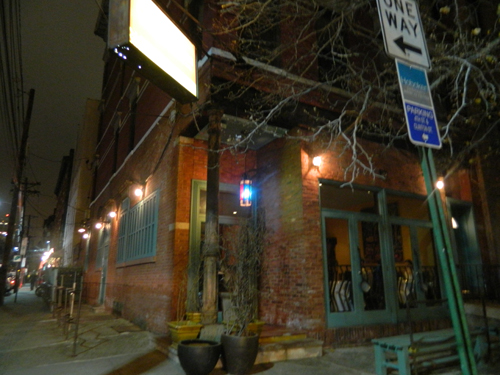 Closures in Hoboken were less apparent, but businesses were hurting. With the PATH stop still down, shops were cut off from potential business in Manhattan and parts of New Jersey, Cucharamama, a South American restaurant whose founder Maricel E. Presilla recently released the cookbook Gran Cocina Latina, is located in central Hoboken on Clinton Street. Manager Gerardo Albarran said after they reopened over two weeks after the storm, the restaurant served about 20 customers per day. "We're all trying to get back to normal, but we might not be there for a year," he said. The bulk of their diners, even over a month later, come from the hospital across the street. Albarran said doctors and people coming for storm-related emergencies stopped by the restaurant for something to eat. Produce deliveries couldn't come in because the tunnels were closed, so the team operated with 20 percent of the menu, sourcing vegetables and wines locally. 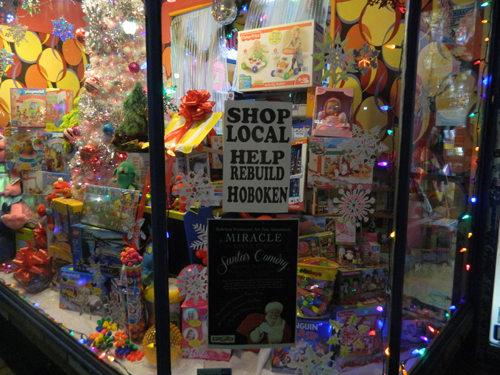 [Sign from a toy store on the corner of Washington St.]

Though busses are running, it's difficult to leave Hoboken without a car. "Lots of people are buying just local now," Albarran said. In both Hoboken and Jersey City, flyers were posted on light poles encouraging residents to shop in the area. 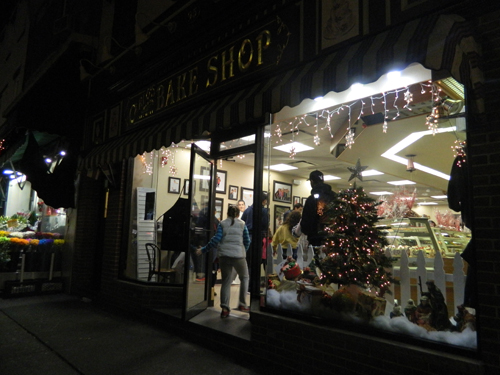 [Carlo's Bake Shop]
Even TLC reality star Carlo's Bake Shop, whose line usually extends to the sidewalk, was able to fit all of its customers inside. But co-owner Maddalena Castano isn't worried. "We consider ourselves lucky," she said. The store and their factory in Jersey City only lost power. The shop donated unspoiled baked goods to shelters. 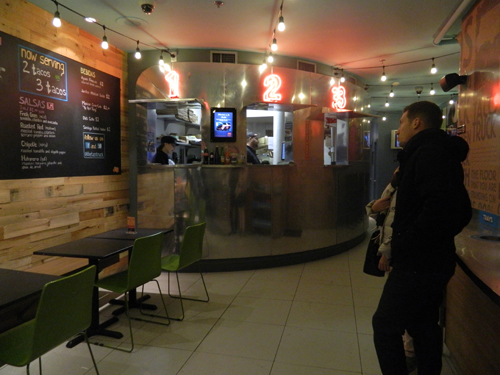 After Sandy hit, casual Mexican shop Taco Truck on Newark St. sold their less perishable produce out of their mobile truck in areas without power. Food that turned without refrigeration was converted into compost and used as animal feed. General manager Mildred Retana said going days without work was the hardest for her employees. "Having the truck out while our shop was closed helped our employees get some shifts back," she said. Though she lives in the area, she said some of her employees that live in Manhattan have a difficult time getting to work, even now, and sometimes come in three hours late because of traffic.

Overall, though most businesses are running again, the restaurant community is hurting from slow business and repair costs. Special town hall meetings are being held in Jersey City to spread awareness for the recovery resources available and various organizations in Hoboken are encouraging locals to dine out. Many restaurants qualify for small business loans sponsored by the federal government.
— Ashley Mason
· All Hurricane Sandy Coverage [~ENY~]