Christian, Preston, and Cory of The Cannibal

Share All sharing options for: Christian, Preston, and Cory of The Cannibal 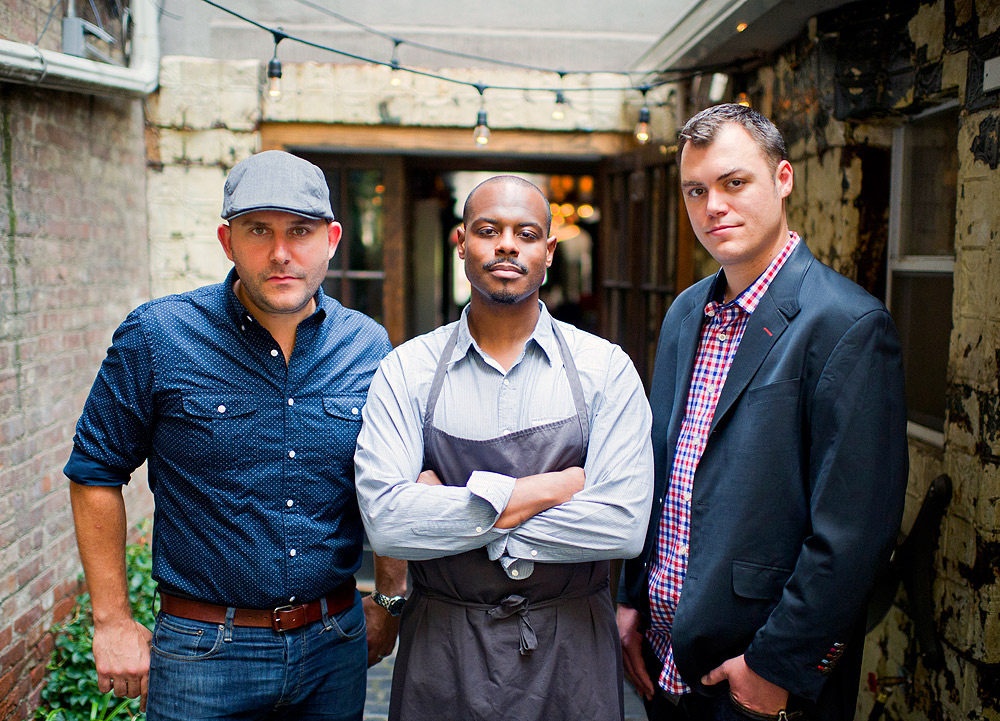 [Christian Pappanicholas, Preston Clark, Cory Lane by Krieger]
The Cannibal gained two big staff members recently: Momofuku alum Cory Lane, and west coast phenom Preston Clark. Although The Cannibal is, at its core, a casual neighborhood restaurant, there have been some big changes to the menu and service program lately, and the meat lovers are taking notice. Eater recently chatted with Cory, Preston, and owner Christian Pappanicholas about the first year of The Cannibal, and the new direction the restaurant is going in right now.

How has The Cannibal changed since last fall? Christian Pappanicholas, owner: I think it's different in a lot of ways. Product-wise, it's a much more elaborate and well thought-out beverage program. I think we've really gotten into a place where we're consistently on top of the products and specialized things that people can't get. Food-wise, I think it's just a more mature menu. The offerings of sausages, pâtés, and terrines are just way more in-tune than they were in the beginning. The really big thing is the steak program.

Cory Lane, general manager: And that's really started to pick up since Preston came on board. The last restaurant he opened prior to this was a steakhouse, so naturally he wanted to do a certain amount of steaks. And we've been offering a lot of different dry-aged cuts, and a bigger variety of those larger-cut steaks because we've seen a much bigger demand for them. When I came on board, and when Christian first opened The Cannibal, I don't think anybody anticipated that there would be that much demand for those types of cuts and those kinds of steaks in what is, in a lot of ways, a bar atmosphere. So, I don't think a lot of people were expecting that. But now that we're offering them, they really want them. It's kind of turned into this weird steakhouse.

Christian: There are two or three côte de boeuf that go out at like 12:30 p.m. for lunch on a Tuesday. And I'm like, "Who are those for?" And they're like, "Yeah, the people next door, they're eating cote du bouef."

Preston, what is your vision for the steak program? Preston Clark, chef: I think that we're getting ourselves into a position where we can really play with the big boy steakhouses in the city. We have big porterhouses, we have the côte de boeuf, and the technique is right, I think. So, it's something that we're really working towards. I think it's the direction we're going in, and we're getting there.

Christian: When Cory got here and when Preston got here, we had a conversation about it and said, "Let's play to our strengths." And clearly, that's it. The original incarnation of The Cannibal, in my mind, is completely different than it is today, and that's a great thing.

Cory, what was your transition like here? Cory: It was really interesting. Christian and I have known each other for 10 plus years at this point. We had always talked about working with each other, and always wanted to. So, when the opportunity came up, we were both really excited about that. Of course, it had its own set of challenges built into that. This is the first restaurant in a long, long time that I've been a part of that I didn't open, and that created a lot of new challenges for me. It gave me a different perspective, and it's been great. It's very important that we have servers here that have a very strong knowledge of beer, but it's also important to me that they have a strong knowledge of, and background in proper service. So, what do I want? I want people who have worked in Michelin-starred restaurants on the floor as a server, but who are also ready to take the cicerone test. That's really hard to find, but I've been fortunate. Since I've come on board, we've brought on two or three new folks that are exactly that.

Do you see Resto and The Cannibal as one restaurant with two rooms, like The Gramercy Tavern? Or Do you see them as two separate restaurants? Christian: The latter for me. We wanted to have The Cannibal be the angry younger brother that doesn't play by the rules all the time, and that's okay. It's balanced, but we like them to be separate. With Preston leading both kitchens, there is a lot of collaboration and a lot of crossover, but they are two separate kitchens with two separate dining rooms. And the same thing goes for the team. There is a little bit of crossover with the cooks, but people tend to be focused on one or the other, so you've got to treat them as two separate restaurants.

Preston, is it challenging running two kitchens? Preston: Absolutely, yes it is. It's super challenging, and it's a challenge that I love, and I love it more than anything else. And fortunately, because of my background, I have tremendous family support so that I'm able to dedicate the time I need to make sure we not only do it, but do it right.

What direction are the menus going in right now? Preston: I think maybe a little bit lighter, which seems to be more my style. "Fussy" is a term we like to throw around, so not so "fussy," because I think that's a trend. People want to go to a restaurant where it's not so formal and there are not so many components. Fewer components, bold flavors, delicious.

What do you want to do next? Would you open The Cannibal in another neighborhood? Christian: There's a lot of conversation about it. One of the reasons both of these guys are here is because we want to add to these places, and see that they are running like they should, and then it's a matter of what's next. There has been a lot of conversation about it, but we're no closer to signing a lease on a new restaurant than you are. But come spring, I think it's something we're really talking about. And it could be anything. Maybe it's another Cannibal, or maybe it's a whole new concept that we're developing. I think once we get through this fall, and see where things are and what people's responses are to Preston and Cory coming on board, we'll go from there.

Have you spotted any critics checking out either place now that Preston and Cory are here? Cory: We're seeing faces we know, but I wouldn't say that it's been a large influx yet. We're keeping our eyes open. Christian: The expectation is there, so we're always on alert.

Christian, do you feel like it's been a year for you here at The Cannibal?
Christian: I don't know. It's hard to think about five and a half years at Resto and a year at The Cannibal. It seems actually a little longer than that. Not in a bad way, but it feels like the journey has been really good in the first year. We feel really good about where we are, and I feel happier with the team that I have today than with any group of guys I've worked with. You feel more confident when you have great people around you, so that's a big part of it.

· All Coverage of The Cannibal [~ENY~]