Industry Tastemakers on Their 2012 Restaurant Breakups

Share All sharing options for: Industry Tastemakers on Their 2012 Restaurant Breakups

As is the tradition at Eater, our closeout of the year is a survey of friends, industry types, bloggers, and readers. We've already covered Best Standbys, Top Newcomers, Best Restohood, 2012 in One Word, and the Biggest Dining Surprises of the year, and the Best Meals of the Year. Now, Breakups. Readers, please add your thoughts to the comments.. 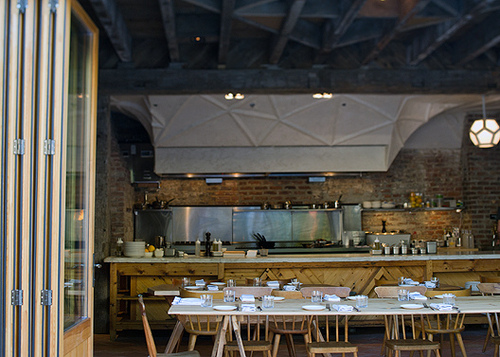 Q: Were there any restaurants that you broke up with in 2012?
Ryan Sutton, Bloomberg critic: I stopped going to Isa because it used to be a restaurant with a point of view. Now, it serves Italian food. I haven't been back since chefs Ignacio Mattos and Pam Yung and others left in the staff shakeup. Maybe I'll give Isa a try in 2013. Or maybe I won't. There's a ton of interesting restaurants to eat at in Williamsburg. And then there's Isa, which serves a Caesar salad for $14.

Adam Kuban, Slice founder: Papa John's. Not that it was hard. I only sampled it occasionally for research purposes as relates to Slice. But after this year, I can't stomach giving any little bit of revenue to that guy. Also, dollar-slice joints. That stuff is dragging down the quality of all New York–style pizza.

Gabriella Gershenson, senior editor at Saveur: For there to have been a break up with Pok Pok, there would have to be a pre-existing relationship. The first time I went I was appalled by how the people waiting outside in line were left to bake in the sun without so much as a glass of water or a peep from the front of house. That was followed by perfunctory service and nonexistent decor (and not in a charming way). The food was very good, which is a shame, because the overall experience was punishing.

Chris Stang, Immaculate Infatuation: I love Sushi Seki, but that place is going to make me go broke. I feel like it gets more expensive every time I go.

Robert Simonson, Times cocktail writer: I'm not going to name specific bars, but I will say this. I develop a quick bias against any bar or restaurant that hires a noted cocktail consultant to put together their drinks program, amid a lot of hoopla and press attention, and then six months later quietly declines to renew that consultant's contract, without telling the public. That's dirty pool, as far as I'm concerned. Bait and switch. And it happens more and more. Particularly in Midtown Manhattan.

Darin Bresnitz, Snacky Tunes/Finger on the Pulse: When Ignacio left Isa, I swore I would never go back. From what I hear, I made the right call.

Kat Kinsman, Eatocracy managing editor: I'm pretty wrenched about the outpost of Almondine in my neighborhood having to break up with all of us after damage at its Dumbo locale. I blame that jerk Sandy for getting between us.

Jordana Rothman: Not as such, although I will never go to Bill's Gay Nineties again—not so long as it's in DeLucie drag anyway. I loved that old saloon in its dusty and merry original incarnation. I scowl to see what's become of it. To borrow a phrase: a shonda.

Josh Ozersky, TIME columnist: KFC. I still love that chicken. But I can't condone the abuse. There were some favorites I didn't break up with but took an accidental break from and will return to as soon as I can: The Little Owl/Market Table, Minetta, anywhere Akhtar Nawab is cooking, The Modern, Daniel, and Hill Country come to mind.

Robert Sietsema, Village Voice critic: En Japanese Brasserie — not because it got any worse, I just got tired of it. Ditto La Bonbonniere.

Jay Cheshes, Time Out New York critic: I switched my dim sum allegiance from Sunshine on Bowery to Royal Seafood on Mott.

Andrew Friedman, author and Toqueland editor: I proactively break up with any place with reservation hassles or insane lines, then provisionally make up when the heat dies down: See you in 2013 Mission Chinese and Pok Pok NY!

Danyelle Freeman, Restaurant Girl: Isa. Don't fix it if it ain't broke. It was excellent and unique until they went and changed the concept and the chef. They were riding high and getting tons of great press. So why mess with it?

Scott Solish, Eater nightlife editor: I break up with four restaurants a week. It's hard to keep 'em all straight.

Alexander Hancock, Eater associate editor: Mercer Kitchen. Had service that was just hilariously bad there one Saturday night, beyond anything that should ever happen (and I'm willing to forgive a LOT because I know what it's like to have an off night in a restaurant).

Marc Shepherd, NY Journal: Lincoln: I don't think I made it there even once, and it was one of my favorites last year. I wouldn't exactly say we broke up, but I think Lincoln has stalled.

Kim Davis, the Pink Pig: Ssam Bar slipped off the list. Been there, done that.

Kate Krader, Food & Wine restaurant editor: I'm not not going to Balthazar, but I don't know when I'm going to go back to deal with the attitude for a table for brunch. (I know, brunch at Balthazar. What was I thinking?)

Foster Kamer, senior editor at Complex: Sorry, Bar Pitti: You're just not worth the trouble, or what your food does to my stomach. It's you, not me. Brooklyn Star, you have finally been overpopulated with assholes to the point of no return, I'm afraid (which may go hand-in-hand with the quality of the preparation of your food straight dropping off). Finally, after leaving the Observer, I no longer have to suffer the depressing wasteland—cultural, culinary, or otherwise—that is Midtown West. But I will miss La Rosita in Hell's Kitchen. Not enough to go out of my way to get it, but still: it's a special little place/hideaway.

Greg Morabito, Eater editor: I broke up with Paulie Gee's for a few months there, but we worked it out and I'm back.