Industry Experts on the Top Restaurant Standbys of 2012

Share All sharing options for: Industry Experts on the Top Restaurant Standbys of 2012

As is the tradition at Eater, our closeout of the year is a survey of friends, industry types, and bloggers. This year, we asked the group eight questions, from Meal of the Year to Top Newcomers. All will be answered by the time we turn off the lights at the end of the week. Responses are related in no particular order; all are cut, pasted and unedited herein. Readers, please do add your survey answers in the comments. 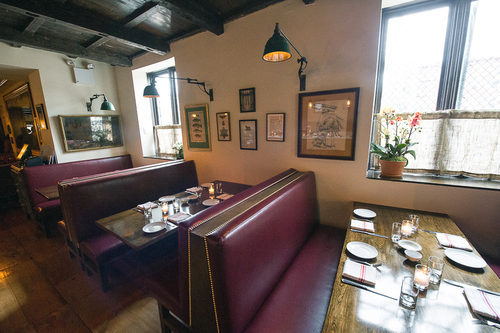 Q: What were your top standbys of 2012?
Ryan Sutton, Bloomberg critic: Frankies 457, Frankies, Prime Meats, Brooklyn Star, Booker and Dax, Empellon Cocina, Roberta's, and Mission Chinese. My typical ritual was this: I'd drop by the Russian banya on Fulton Street for a few hours, you know, sweat out all the foie gras and bourbon from a long week of professional eating, and then I'd swing by Mission for a few hits of Sichuanese novocaine no earlier than 10:45 p.m. Or sometimes I'd hit up Roberta's at prime time with my folks; the trick at Roberta's is the bar, you'll never wait longer than 45 minutes for bar seats, even on a Saturday night. You can complain about the wait at Roberta's and Mission all you wait, but if you play your cards right, you'll be eating at either in no time.

Foster Kamer, senior editor at Complex: Perla took too much of my money, especially when it first opened (I've since learned restraint, and also, to pay more attention to my dwindling cash). I feel like I should be on Gabe Stulman's investor dividends list. It's pathetic. Jack's Wife Freda became my go-to for brunch this year. But I probably had more meals this year at La Superior than any other year before it. Every time I go, every other viable or semi-viable Mexican option in New York (of which there are so few) became that much more of a distant memory. Also, I've never had a bill for two go past $44. That helped. Also, almost everything that opened in Williamsburg this year just annoyed the shit out of me.

Lockhart Steele: My standbys were the restaurants and bars of my home neighborhood, the Seaport, particularly Barbarini, Paris Cafe, Il Brigante, and Meade's. All were closed by Sandy. Only Meade's has reopened. Go, there, and have a beer, now.

Danyelle Freeman, Restaurant Girl: I'm a Japanese junkie, so I ate at my usual haunts...Aburiya Kinnosuke, Yakitori Totto and Blue Ribbon Sushi. I'm also an oyster freak, so I love sitting at the bar at Aquagrill, brunch at Balthazar, and Thai from Wondee Siam.

Josh Ozersky, TIME columnist: Il Buco Alimentari: it's nearby, open all day, will serve me the world's greatest pork sandwich, and I can take salami Toscano and Calabrian peppers with me when I go. Bar-bo-ne, also close, with grossly underrated prices and the extra value of being owned by a panda; the Brindle Room, home of the city's best hamburger; Osteria Morini and Torrisi, maddeningly close to each other; Lure/Burger & Barrel, both Caponic; and, probably the restaurants I went to the most, Hearth and Commerce, neighborhood two-stars (in my book anyway) both brilliant, satisfying, and the product of Marco Canora's and Harold Moore's iron control and integrity, respectively.

Chris Stang, Immaculate Infatuation: I spent a lot of time this year in the back patio at Vinegar Hill House, eating pork chops, drinking wine and using lots of their artisinal Brooklyn bug spray. You're supposed to drink that too, right? Also, L'Artusi remains a constant and Perla was in heavy rotation.

Jordana Rothman: Last year, next year, always it's Mile End. I never stop craving that food; it's just unimpeachable. Seeing the way the community has rallied around Noah and Rae after Sandy is really a testament to the good will they've cultivated (and to how much New York City loves its smoked meat). I've also been on a bit of a taco tear this past year. For a few months Daniel Krieger and I were weekly pilgrims at Matamoros in Sunset Park. But then Sue Torres introduced us to Tulcingo in Corona and we haven't looked back. That's the best al pastor taco in New York, and the birria de res soup is sort of perversely delicious.

Marc Shepherd, NY Journal: This year, I didn't have one. I was promiscuous. I wandered.

Andrew Friedman, author and Toqueland editor: Prime Meats (Brooklyn). I live/work around the corner and it's where I go for solo lunches, late-night dinners, early weekend meals with my family, and drinks anytime. It's never failed me. (I should mention that, with the exception of the Franks, I'm not known to the house, which speaks especially well of the FOH team and kitchen.)

Mimi Sheraton, former Times critic: I wish you had a category for restaurants I wish I had been to more often...many favorites I get to only once in a while such as my single favorite NYC restaurant, La Grenouille, and also Da Silvano, Balthazar, Wallse, and Union Square Cafe. What with the economy and the interest in trying new places, I did not get back to those nearly as often as I would like. Top standbys of 2012: Good (on Greenwich Ave.), Elephant & Castle, ABC Kitchen, Colicchio & Sons, Pulino's, DBGB, Bar Boulud, Boulud Sud, Meme, The Breslin, Sandro's, Bar at MoMA, Barbuto.

Darin Bresnitz, Snacky Tunes/Finger on the Pulse: Maison Premiere — No better place to unwind after a long day of work or to start a long night. Whirly Bird Taco — With essentially only one item on the menu, they knock it out of the park every time. Momo Sushi Shack — Phillip Gilmour is the Grand Poobah of fun and his sushi and eccentric Japanese dishes have turned some early evenings into late nights. Blue Bottle — I never thought about coffee until I had a cup of Blue Bottle. Having one open near where I live has been beyond dangerous.

Amanda Kludt, Eater editorial director: I found myself at Soba-Koh in the East Village quite a lot this year, first on the hottest days of summer where nothing but cold noodles with roe would suffice and now again in the winter where their hot wasabi soba is my go-to. Also — first because it was one of the best additions to Williamsburg's dining scene this year and second because I got married in the hotel — Reynard, which evolved and improved over the year into a very serious and wonderful restaurant.

Andrew Steinthal, Immaculate Infatuation: Danji — One of the few perks of working in Midtown is getting to eat at Danji once a month. This place never gets old and is rarely packed during lunch. Upstate Craft Beer & Oyster Bar — Best oyster bar in NYC. Blue Hill Stone Barns — Immaculate Infatuation's favorite restaurant. I've generally stopped splurging on special occasion meals anywhere else because afterwards, I'm bummed that we didn't just go to Stone Barns.

Alexander Hancock, Eater associate editor: This is tough because I moved from New Orleans exactly midway through the year, so I haven't really had enough time to repeat at too many restaurants. But I'm a pizza fiend, and easily the one restaurant I've had the most meals in this year is SMILING PIZZA in Park Slope. There's just no contest: in five months I must have eaten there 15 times at least. (I eat a LOT of pizza.) The only other places that I've eaten more than one or two meals since moving here are Pulino's (again: pizza), Brooklyn Central (again: pizza), Calliope, Talde, Four and Twenty Blackbirds. Standbys inevitably lean towards the neighborhood-type place, hence my list being mostly Park Slope/Gowanus (where I live) and the East Village (where our office is).

Robert Simonson, Times cocktail writer: Milk & Honey. Partly because I'm a sentimentalist, and I knew it was only a matter of time before the original Eldridge Street space closed and was reborn as Attaboy, with Milk & Honey reopening as a bigger joint on 23rd Street. But also because the original is still such a damn good bar, with a great atmosphere and drinks that never fail. Also, Clover Club, because it's in my neighborhood, and it's good. And then there are the usual suspects, like Old Town Bar, McSorley's, etc.

Greg Morabito, Eater editor: Il Buco Alimentari for sandwiches, bread, gelato, expresso, and splurge dinners and lunches. Noon on Saturday is my favorite time to go to Alimentari, because you can order most of the dinner menu and the place is half-empty. I think we'll be talking about Justin Smillie for years to come.

I dined at Reynard more than any other sit-down restaurant this year. Most of my visits were on the weekends, usually before 11 a.m. The people that work there are great, the room is a stunner (especially in the morning), and I just love Sean Rembold's food, especially his vegetable-based dishes.