Friends of Eater Name the Top Newcomers of 2012

Share All sharing options for: Friends of Eater Name the Top Newcomers of 2012

As is the tradition at Eater, our closeout of the year is a survey of friends, industry types, and bloggers. We've already covered Best Standbys. Now it's time for best newcomers. 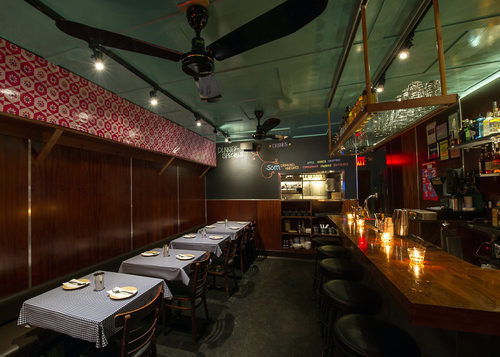 Q: What are the top restaurant newcomers of 2012?
Andrew Friedman, author and Toqueland editor: For sheer seriousness and ambition, albeit at a high price, I'll give the nod to Atera. He operates in a style that I don't particularly relate to, but Matt Lightner may be the chef who wins me over to it as he continues to develop over the next few years. This is, by far, the restaurant about which I've had the longest and most passionate and philosophical discussions/debates over the past 12 months.

Josh Ozersky, TIME columnist: The NoMad, obviously, was the opening of the year, unless I am forgetting some other huge opening, which I well might be. Then Perla. Mike Toscano is a huge talent, a young Mike White or Mario Batali, with meat standing in for pasta. Did Il Buco open this year? That would be second...I wish Eater would restore "Openings," which was invaluable for this kind of thing.

Lockhart Steele: Mission Chinese and Pok Pok. On the vital question of which wears the crown, mark my vote in the Pok Pok column.

Chris Stang, Immaculate Infatuation: Perla, The Pines, La Vara, Exchange Alley, Gran Electrica. What happens if I don't put the Nomad here? Is there a penalty?

Robert Simonson, Times cocktail writer: The Shanty (even though it technically opened in late 2011), because it has a fine host, Allen Katz, and some of the better bartenders in town. And because there's something rare and poetical about drinking a cocktail while looking as a beautiful copper still that's busy making more alcohol for you to make cocktails with. Also it's symbolic of the trend I most support in the New York bar world: lack of pretension. Just well-made drinks with no attitude or sense of self-congratulation. Mother's Ruin, Dear Bushwick, Tooker Alley and Basik are also part of this trend. Also, in its weird way, is Booker and Dax, another highlight of 2012. Sure, they're doing a lot of whiz-bang Mr. Science things behind the bar. But they don't draw attention to the bells and whistles. They use their tools, don't exploit them. And in the end, the drinks are delicious and the service attentive. And that's what counts. On the other end of the style spectrum, there's the ultra-luxe Nomad bar, the superlative drinks program of which (not to mention the fine, old fashioned service) cannot be denied. But, you know, the Nomad isn't pretentious either. It's just plain fancy, which is a different thing.

Bret Thorn, senior food editor, Nation's Restaurant News: I haven't made it to many of the big-name newcomers this year, and most of the ones I did get to didn't particularly thrill me. I'm looking forward to getting to Atera, NoMad, and L'Apicio. That said, there are three new restaurants in my section of Park Slope that I welcome wholeheartedly: Fort Reno, finally providing us with good barbecue and a nice whiskey selection, Pork Slope for its tasty sandwiches, and Crab Spot, which opened on Wednesday and which I visited on Thursday for a delicious blue crab special (six crabs for $15) and several glasses of Muscadet.

Andrew Steinthal, Immaculate Infatuation: Gwynnett St — The most pleasantly surprising meal I ate all year. They're doing some special stuff out in East Williamsburg. Crave Fishbar — Crave is quite possibly the best seafood restaurant in NYC. The tuna entrée is phenomenal, as is the ramen with chili glazed hake. We also consider ourselves experts in the field of chocolate chip cookies and Crave's, which they bake freshly on premises and serve with a scoop of homemade vanilla ice cream, is the best in show. Also: The Pines, La Vara, Chez Sardine

Alexander Hancock, Eater associate editor: Mission Chinese and Pok Pok, duh. Also the work that Dale Talde did in Park Slope over the last year ? namely through Talde and Pork Slope ? is pretty impressive. That Talde review from Pete Wells was probably (hopefully?) a little bit of a gut check, but I think that what he's done with those two places puts him on that list.

Marc Shepherd, NY Journal: Aska, Perla, The Nomad, Mission Chinese, Acme. [I did not make it to Blanca, Atera, or Pok Pok NY.]

Foster Kamer, senior editor at Complex: Perla, obviously. Italian in this city hasn't blown me away like I've read I'm supposed to be blown away (sorry, Batali). From the first visit, Perla did. Also, if I'm going to spend that much goddamn money on pasta, I would, in fact, like to hear "Rack City" as I do it. I know everyone's going to say this, but yes, Mission Chinese is one of them too. Not just because (full disclosure) my roommate cooks there, but of note: (A) If it were more expensive, it might not have made my pick, and (B) if you are going to live with a cook—messy, derelict motherfuckers that they are—you might as well live with one who occasionally comes home with a box of Salt Cod Fried Rice. But of all the restaurants to show up in 2012 in New York, none of them blew me away quite as much as Restaurant R'evolution in New Orleans did. John Folse, in New Orleans, running a kitchen like that: like a Second Coming of Christ for Cajun/Creole cuisine. That place makes me want to do terrible, terrible things.

Levi Dalton, I'll Drink to That: Hopefully, Salvation Taco. New Yorkers go to SF. New Yorkers know how bad the tacos are here in New York, even if no one will admit it. We serve up Mayor Bloomberg's Spanish when it comes to tacos. Hopefully we can reclaim a little dignity. And it might turn out that Maysville is a sleeper hit. Hey, I've eaten at Char No. 4, and the food there is delicious. I'm hoping a bigger kitchen will bring out even better.

Ryan Sutton, Bloomberg critic: Empellon Cocina, Mission Chinese, Blanca, Gwynnett St., Perla, Parm, Atera, La Vara, Maison Premiere (I know it's almost two years old), Thirty Acres, North End Grill, The NoMad and Pok Pok. So that's thirteen restaurants and I could probably name more. I usually limit my "best newcomers" list to about ten choices, and back in 2009, during the throes of the recession, I could barely recommend more than five new spots. And yet now, less than two months after Sandy struck, we're having one of the best years for new restaurants in a long time. There's never been a better time to eat out in New York.

Kat Kinsman, Eatocracy managing editor: A.L. Coluccio, Pok Pok, Talde, NoMad. (No, I haven't been to Mission Chinese yet, and I'm mortified. Need to return to Woodlands and see if it is indeed as good as I think it is.) Outside NYC: Toups' Meatery (NOLA), R'evolution (NOLA), Hog & Hominy (Memphis), and I cannot wait to try Mike Lata's new place, or Rappahannock Oyster Bar.

Darin Bresnitz, Snacky Tunes/Finger on the Pulse: Pork Slope — Whiskey + late night pork bites + dart board = a good time. Mile End Sandwich — Two of my favorite brisket-bearing Jews serve up succulent sandwiches to a hungry city crowd. Blanca — Just when I swore I was done with tasting menus, they pull me back in.

Jordana Rothman: Putting aside the old-world staples, it has been a long time since there's been anywhere worthwhile to eat on the Lower East Side—so I have to join what will no doubt be a chorus of flattery for Mission Chinese. In the East Village, Alex Stupak is doing the lord's work at Empellon Cocina. It's one of those moving target restaurants, that feels like it's in a constant state of evolution and growth, which is very cool. The new il Buco Alimentari is very much my speed and I think Dominique Ansel Bakery has been criminally under-praised. Finally there's a humble little place that no one has written about, with an NBD roasted chicken. Can't recall the name.

Gabriella Gershenson, senior editor at Saveur: Mission Chinese, hands down. NYC could use a few more freewheeling, creative restaurants like this one. Il Buco Alimentari—I'm a sucker for the all-day restaurant/cafe/market model when it works, and it does here. For fine dining, Atera does New Nordic cooking more faithfully and better than anyone else in NYC. Each course is a pun and a surprise. For selfish reasons, Mile End Sandwich. As a Manhattanite, I'm thrilled that I can get my smoked meat here.

Greg Morabito, Eater editor: The Nomad. It's a big, splashy project with a million moving parts, but Team Nomadness totally pulls it off. It's also a surprisingly accesible restaurant, especially if you just want to have a drink and a few plates in The Library. Rosemary's is a wonderful date spot with great food. Reynard, Blanca, and BrisketTown were big surprises that really delivered. And although nobody is checking it out yet, Carmellini's The Library is a strong addition to the Noho dining scene.