Share All sharing options for: Mary, Chris, Donal, and Brian of Whitehall 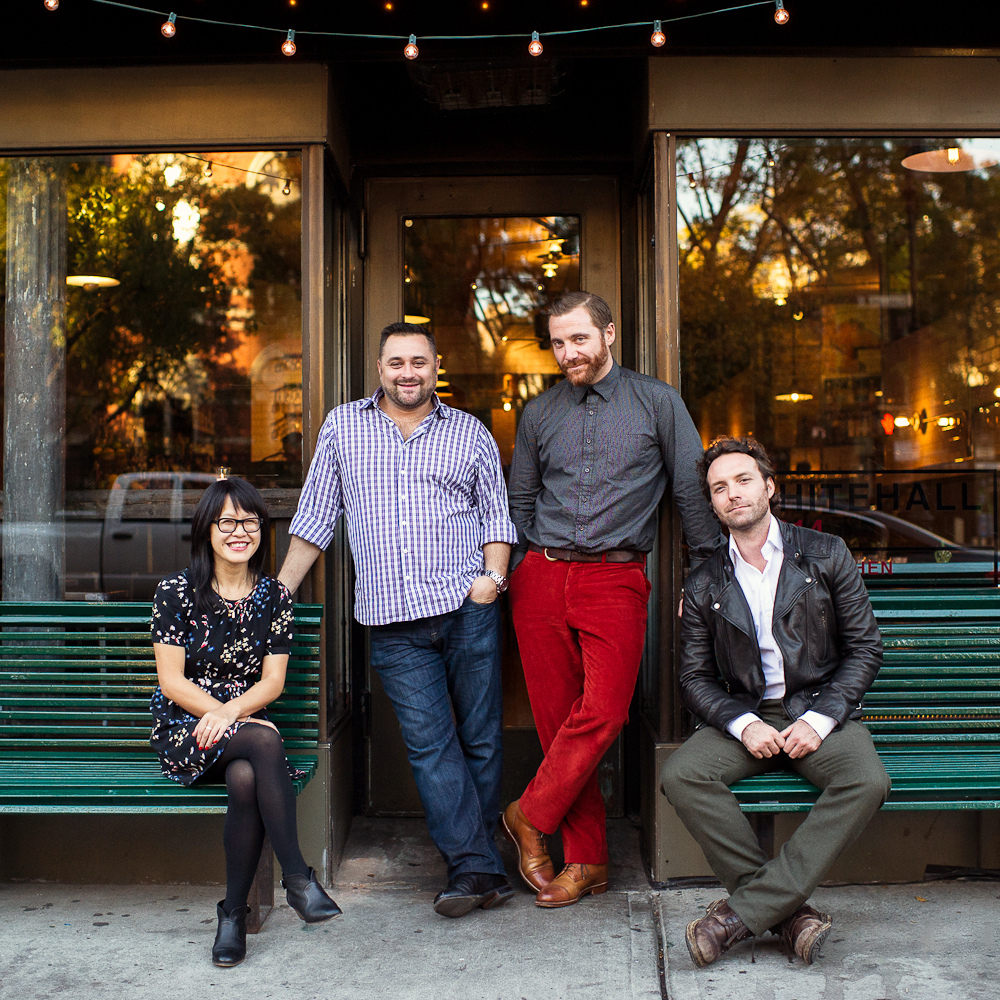 The members of the Highlands Restaurant Group had a crazy year. In fall 2011, they opened their bright and airy gastropub Whitehall on Greenwich Ave, and the place was packed. A few months later, they closed their Lower East Side restaurant Mary Queen of Scots, and opened a hit pop-up restaurant out in Montauk. Now, the members of the group are plotting their next move. Eater recently chatted with Donal Brophy, Mary Wan, Brian McGrory, and Chris Rendell about how Whitehall came together, and what they've got planned next.

When did you first start talking about doing this project? Brian McGrory, owner: The space had become available, and Donal noticed that a "for rent" sign was in the window. It was a great location and it was a great space for our new concept. Donal Brophy, owner: Obviously, timing wasn't ideal, being that we were in the throes with Mary Queen of Scots, and Highlands was quite taxing on our time as well. But nonetheless, we looked at the space, loved it, and unanimously decided not to do it. Then a couple of months went by, and the landlady contacted us and said, "Look, I really like you guys as operators. Would you reconsider taking this?" Mary Wan, owner: I think with the Highlands, we've been in the neighborhood for a couple of years, and they know what we do. We have a good rapport with the neighbors. Brian: She knew that we had a good rapport with the block association and the neighbors. She had a few offers on the table, but she wanted someone who was established and could give her a very successful business.

How did you put the space together in terms of design? Donal: We knew what we wanted to do. After exploring the darkest depths of Scotland, we wanted to do something sort of light and airy. We were very inspired by the open spaces of London. Sort of post-war Utilitarianism, British. And that was going to go hand-and-hand with chef Chris's food. So, we started exploring the color palettes of the parks and the London Underground stations. But once we got in the space, we realized that the bones were really beautiful. Chris Rendell, chef: The design kind of lead to the food. People think English food is sort of served in a dark space, dark leathers — heavy. But once we designed this space, I thought about something light and bright and airy. I wanted to go to the other end of the spectrum of British food, where it's very fresh and seasonal.

How was the opening? Donal: It was amazing.

Who was coming in? Brian: It was our community, people from the Highlands and the locals. We were featured in a lot of publications — The New Yorker, Time Out, Vogue — so there were a lot of people traveling to come check us out.

Was it hard to keep up with the demand at first? Donal: It was kind of one of those stock problems, really. You want to make sure that your food and service are good, right off the bat. You get one shot at the prize, so you've got to try your utmost to make sure that everything is right, and it never is. It's always quite a nail-biting experience. But we were lucky that we were treated very well in the press, and that everyone that came by really wanted us to succeed. The first few months were interesting. A lot of good people watching.

I think you did a great job turning this space around. Sweetiepie was a truly silly restaurant. Do people ask you about that? Mary: Everybody. When people come in, the first thing they ask is "Where's the cage?" Brian: But the irony of the whole thing is that the previous operator left everything but they took the birdcage. Donal: That birdcage is sitting in someone's basement somewhere.

Chris, did you have to revise the menu at all after the first month? Chris: Yeah, there was a little bit of revision. There wasn't too, too much change. I think we kind of got it right from the start. There were a couple of soups and things of that nature that didn't work out, straight away. We found that this was sort of a feminine place, so we kind of got rid of a few of those meaty dishes, and put some more salads and items like that on the menu. I think that really helped along the way.

What was the review process like? Brian: All of the staff was obviously on high alert. Chris: They still are. I mean, we're only a year in. Donal: It's kind of a strange thing, because we got mentioned in every single publication. The New York Times wrote a beautiful piece, more as a kind of lifestyle, cultural piece. And then we got a beautiful piece in the New Yorker. We got tons of press but yeah, we didn't get reviewed. Brian: Also, I think that a lot of people...we're conceived of being bars, when in actual fact, we have a very serious chef, and we're very food-focused. Donal: Everything we do is kind of with a wink and a smile. We obviously take our food very seriously, but we're not super-pretentious in what we do. We like to make it accesible to everybody, and we like to have a strong bar program, too.

Did the crowd move on after the first few months? Donal: The summer months are when you feel it the most, but we did a pop-up out in Montuak, Byron at the Surf Lodge, and inadvertently, that kind of cross-polinated and helped Whitehall, because it kept us relevant and kept us in the press. All our customers that were out there were really pleased to see us out there, and Byron was such a huge success that they were reminded of Whitehall. It was good for the brand.

Why did Mary Queens of Scots close? Did that give you any perspective on how to run your other places? Brian: I think it comes down to location, location, location. Mary: Yes, location. It was just where we were on Allen Street. Donal: But you ask about perspective, and it's funny because in a weird sort of way, Mary Queen of Scots became a cult classic. Everyone was like, "Oh my god." In a way, I think it was a little bit before its time. Brian: The irony is that, the feedback from our guests is that Mary was one of their favorite places. Mary: The weekends were really busy, but you can't sustain a business, especially with that kind of rent, on weekend business. It was sad, but I'm glad we did it. Donal: We're only getting started. That's a drop in the ocean as opposed to what we've got planned for the future.

Are you going to do Byron next year? Brian: Yeah, we're actually going to get started early. We'd like to renovate the kitchen, and we've got some plans lined up, so we're looking forward to it.

Does if feel like it's been a year? Brian: No way. Chris: Being out in Montauk for those 16 weeks actually kind of broke it up a little bit. When we headed back, it was like starting over again.

Would you like to keep opening restaurants? Brian: Yeah. Donal: We're gluttons for punishment. Brian: We're all very creative individuals. This is a young man's business, we've still got a lot of ideas, and we love what we do. Donal: You don't want to get too comfortable.

Do you think you'll open another restaurant in the next year? Donal: Yeah. We're still working on locations. We feel like we're kind of ready to branch out from downtown Manhattan. Perhaps Brooklyn. There are a lot of different options on the table, and we want to think outside the box. We want to make sure that we're tapping into different markets — it's become more than just entertaining our friends. We want to show everyone what we can do.