Cris Criswell on Getting Burned by Travelers Insurance

Share All sharing options for: Cris Criswell on Getting Burned by Travelers Insurance

Throughout the next few weeks, Eater will be running testimonials from restaurateurs who are trying to get money from their insurance companies to cover damage caused by Hurricane Sandy. Up now: Cris Criswell, one of the owners of West Village newcomer Swine: 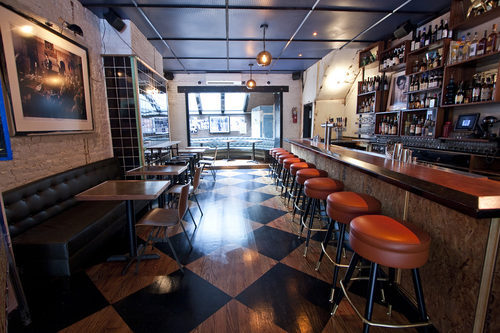 We have been battling Travelers Insurance since the first week in November, just as most (if not all) of their other Sandy-affected clients have. We had been open for three months when we Sandy hit, and we were without power for five days and closed for six days because of the transit shutdown on the Sunday before Sandy hit.

As a new business, we were already in that strange "just opened" phase, and we were happily seeing our business start to thrive in the three weeks before Sandy. Then she came to town, and the power went away. We lost close to $10,000 worth of food, and we lost probably around $30,000 in income for that week we were closed. And that was just the beginning, because as many of the stories Eater has printed note, business just didn't come back to the place it was before Sandy. I would sadly say (although it is a happy week), that this is the first week that felt anything like those weeks right before Sandy.

Travelers initially just told us that we weren't covered. Sorry, too bad.

When we pressed them, they finally sent us our actual policy, which is over 80 pages long and has so many riders and cross-references that it is simply impossible to understand (and I'm an attorney). The first time we saw our "actual" policy was after Sandy, when we requested it. The document we signed just states how many things we are covered for and how much coverage we have. Nowhere on those pages does it state that there are additional terms in another document. I find that unsettling.

The long and short of it, after pressing them, was the same as most other restaurateurs wrote about: our business interruption policy was superseded by the fact that we didn't pay for flood insurance. And the fact that Con Ed's inability to provide power was because of a rising water issue meant our losses were caused by a flood (although we suffered no water damage). Of course, they gave us the whole, "If you can get a letter from Con Ed that proves us wrong and we'll look into it further" run-around, which was like pouring salt on our wound.

I took to social media to shame Travelers and let people know of their behavior, and Travelers wrote back publicly asking me to direct message them on Facebook and Twitter, which I did. They have never again responded at all. They just keep sending us bills for our coverage, which we continue to pay because of our contract with them. That contract is up in February, and we are, of course, going to switch carriers. I'm thankful we are still open, as I know others have not been so lucky, but it really sucks to know that you've been in business with an insurance company that would rather you go out of business than pay you a single penny that might help you. Partners, indeed.

We are trying to find out which insurance company (or companies) acted honorably so we can give them our business in February.

Do you have an insurance company horror story that you'd like to share? Operators are standing by.