Right now, restaurateurs all over the city are working with their insurance companies to get money to cover the damage caused by Hurricane Sandy. Many of these people are getting the total run-around.

To shed some light on this situation, Eater asked a large group of restaurateurs three questions:

About a third of them responded. Here are their unedited testimonials:

Stay tuned next week for a closer look at how the businesses of Red Hook, The Seaport, and Dumbo are faring after Hurricane Sandy 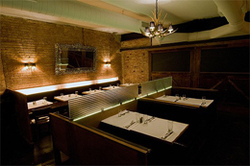 Sara Jenkins, chef and owner of Porchetta and Porena: 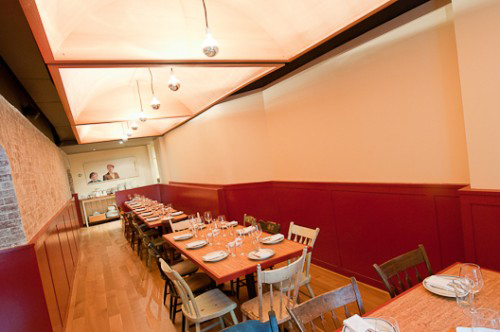 2) Unfortunately, at Porsena we are not covered for food spoilage due to lack of coverage. The premiums were apparently very high according to my agent, and so we did not have any. At Porchetta we are still winding our way through the process to try and get the $2,500 we are supposedly eligible for.

3) Some of my friends are being told they need a letter from Con Ed specifying why they had no power — a letter Con Ed is not going to write. It was a slow, rough summer in the East Village, and after October, it felt like we were all going to pull out of it, and things were really roaring along, The hurricane and its after-effects certainly put a dent in that. I'd say it was two weeks from the hurricane before things started to come back to normal, but they are still not at full speed. Nonetheless, I have to feel grateful, as compared to many others, we are in great shape. We didn't have any flooding or storm damage. My home in Williamsburg was unharmed. 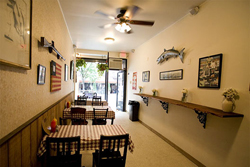 Shawn Collins, chef at Georgia's East Side BBQ: We are still getting the run-around from the insurance company. In a nutshell, we lost a week of sales and all of our product, salaries for the week. etc. Since we sell a lot of meat, that equals a lot of loss. From what I understand, most people were told one of two things: 1) Loss of business is not covered because it was a choice for Con Ed to kill the power so therefore not an accidental thing and that we should form a class action suit against Con Ed. 2) Others were told that it was caused by flooding and they are not covered for flooding. These businesses are all on the same block of the Lower East Side and have all had the same problem yet the responses are different. We pretty much expect to get nothing but are still trying at this point. 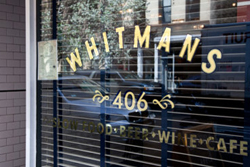 One of the team members from Whitmans writes in: 1) We estimate that we lost $10,000-$12,000 in product and loss of business combined. 2) We asked for loss of food product, we submitted our claim, and have to yet to hear back. We have followed up with email and calls, only to get stonewalled. 3) Using some boilerplate excuse. "This is not covered under your policy," and, "What is the reason Con Ed lost power?" 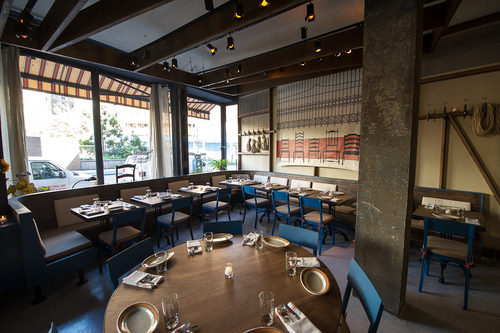 [Daniel Krieger]
Indeed Hurricane Sandy was and still is a challenging time for the restaurant industry in the lower part of Manhattan and other flooded areas in the city. In addition to the week that the city had no power, we are still recovering from the aftermath of the storm by not seeing the same flow of people. I often refer to the present moment as the "hurricane after the hurricane" in what has become a very slow recovery. As you already know, here at Barraca we tried our best to remain open (with the help of a generator), not only to test our team under such difficult circumstances (especially for a restaurant that at the time had only been in business for a month), but more importantly, to offer our services to a community in need, as we were the only open establishment in the area offering food, heat, and in some cases, just company to neighbors that had to go through the whole thing by themselves. Our sister restaurants Rayuela and Macondo located in the LES were not as lucky...it was impossible to open in the area and they had both suffered tremendous losses not only in inventory and salaries, but also in of loss of income. In the case of Barraca, we were able to stay open at a high cost. Then again the purpose, as I said before, was to stay open rather than make a profit out of it.

I would estimate that each restaurant sustained damages in the neighborhood of $50,000 but I insist that the biggest loss has been in the slow recovery. As everyone knows, dealing with insurance companies is a long, frustrating, and tedious process. We are still submitting documents and going back and forth with infinite details, well aware that our time and efforts will not guarantee a positive response form our insurance company. Timing as you know couldn't have been worse. If you keep in mind that in addition to Sandy, there was a presidential election, a second snow storm, and erratic weather change preceding Thanksgiving week. The month of November was extremely challenging. 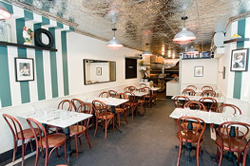 Mathieu Palombino, chef and proprietor of Motorino and Bowery Diner: 1) With the exeption of dry goods, absolutely all food was lost, hundreds of pounds of quality meat and cheese, well over $10,000. The money aspect was one thing. 2) We are hoping to recoup the cost of food and I think we will, for the most part, but not much beyond that. 3) I was told last week that "Business interuption insurance we're not covering, loss of business due to electrical shortage." So that is that. No surprise. But at the end, we got lucky. All that was lost was money. 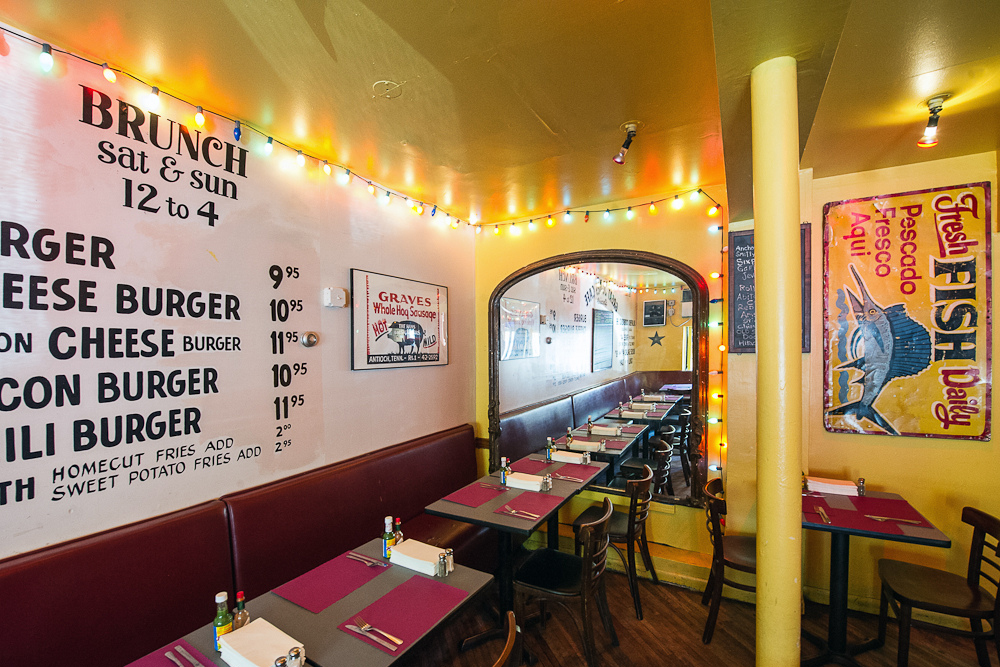 One of the owners of Great Jones Cafe writes in: Our estimated losses were $15,000. We are still waiting to hear from our insurance company. We do not know what to expect. We'll have more information in a few weeks. 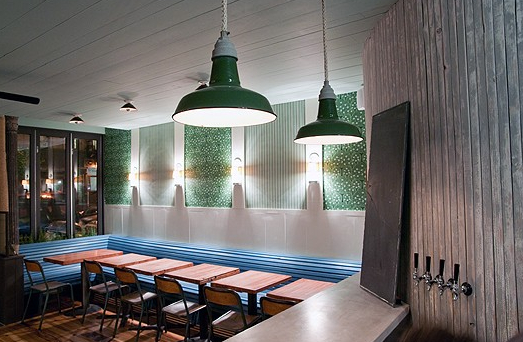 [Daniel Krieger]
1) We had $0 in actual physical damage (spared by 100 ft from a couple of feet of flood waters). We lost around $4,000 in inventory. To extend your question (because it's a major component of the insurance question), we lost maybe around $32,000 in sales for six days closed. Also, by law and out of loyalty, we carried $6,000 in salaries for managers. So total gross losses of $42,000, not including offset from things we didn't have to spend money on (remaining labor, food purchases, etc).

2) Our insurance company (Global) sent their adjuster to us last week. (Amazingly, as an aside, he's an independent contractor from San Diego, living in a motor home out here for two months just to work on Sandy-related insurance claims.) He was extremely pleasant and said that Global intends to cover the maximum that we are due. So, assuming that's true, we might get back:
- The full $4,000 in lost inventory.
- Half of the $32,000 for business interruption (half because though we have this type of insurance, it has a three-day "deductible", only kicking in on day four).
- Maybe around $5,000 of the carried labor expenses. (This is highly TBD, probably the least certain element.)
- So a subtotal of $25,000 is conceivable.
- Subtract from that whatever "savings" they determine that we had from not being open (high-level P&L spreadsheet stuff where they subtract out every penny not spent on utilities, labor, cost of goods, etc, etc).
- I will be surprised if they give us as much as $15,000 in the end. I would view that as a victory.

3) So far (because we're so early in the process), no excuses forthcoming except for the clarification on the business interruption coverage, which was news to me. My insurance broker (not the guy who makes the reimbursement call, unfortunately) is the same guy who represents Gabe Stulman and a heap of other good restaurants in the city, and he helped Gabe enormously when they had the fire at Joseph Leonard. So, I'm hopeful that he chose his insurance carriers wisely, has good relationships with them, and is behind-the-scenes steering this in a positive direction for us.

Otherwise, business is great at the restaurant. But for Sandy, it was looking like our best fall season yet, and we've been as busy as ever following the storm. I think that a good way to frame it for customers (or just to keep in mind) is this: a small place like ours has a $30 overall check average (brunch, lunch, dinner) and of that, around $2 is our profit (someone in the McNally empire is going to read that number and fall out of his chair laughing). Our ballpark net loss (out of $42K gross) may be around $30K. Divide $30K by $2 is 15K, which is around how many meals we have to make up to get back to where we were pre-storm, and, incidentally, is around the number of people we serve in three months. So it's like three months of work getting wiped out. Which is neither a crushing defeat (see: Mile End, Red Hook Lobster Pound) or peanuts.

Do you have an insurance company story to tell? Let us know.
· All Coverage of Hurricane Sandy [~ENY~]