Walt 'Clyde' Frazier on His New Job as Maitre d'

Share All sharing options for: Walt 'Clyde' Frazier on His New Job as Maitre d'

This is The Gatekeepers, in which Eater roams the city meeting the fine ladies and gentlemen that work the host station at some of New York's most popular restaurants.. 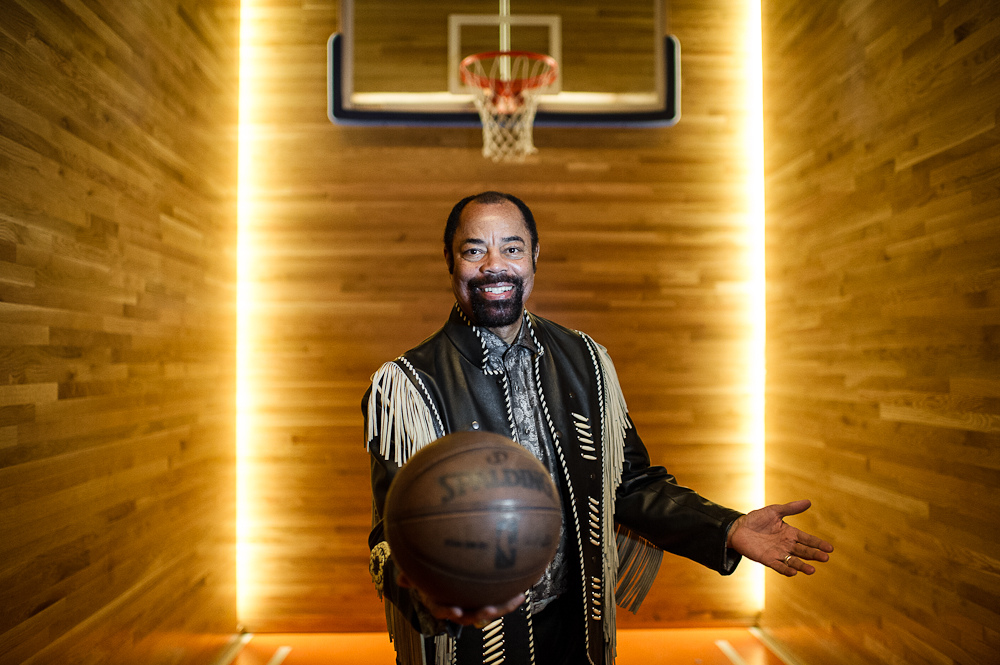 Earlier this year, Knicks legend Walt "Clyde" Frazier teamed up with a group of restaurateur friends and chef David Waltuck to open Clyde Frazier's Wine and Dine in Hell's Kitchen. The restaurant is a shrine to the basketball hero: the walls are covered in cut-outs of his 70s suits; vintage photos from Frazier's Knicks days are plastered all over the walls; and the dining room features a half-court where customers can shoot hoops, just like Walt used to do. Several nights a week, Walt also works the dining room as a maitre d', of sorts. As Frazier describes it, his new job helps him keep a close relationship with his fans. Eater recently chatted with Walt about working the floor at Clyde Frazier's Wine and Dine:

Can you tell us about how you got involved with opening a restaurant? Walt Frazier: My partner is my friend first, and he does restaurants. He came to me with a concept, and it took me a couple of weeks to think about it, because I like sleeping. There's no midgame. I like hanging around the house, and I don't do anything. So, I knew it would be a commitment. If my name is there, I have to be involved. People are looking for me to show up. But once I thought about it...that's what I do every day. If I walk on the street now, people want my autograph. They want to take a picture and talk about the Knicks, so now I'm just doing it at my own restaurant.

At any point in your other career, did you think about opening your own restaurant? Did you dream about it? I thought about how nice it would be. Even when I used to go with my partner to different restaurants, I thought "Oh this might be nice, meeting and greeting different people, talking to them." So I kind of thought of it then, but then when it was actually upon me, like I said, I had to think long and hard before I committed myself. People see restaurants as a glamorous business, but it's a very tough business. The food and the service — a lot of things have to go right to be a success.

Do you like playing host and maitre d' at the restaurant? At this stage in my life, it's a blessing. When I come here, I see black people, white people, Asian people, old people, young people. The support that they give me is really overwhelming considering that I haven't played in like 30-something years.

What's it been like working the floor and greeting fans? They seem to be surprised when you walk through the space. Right, because so many people just put their name on something, but they don't actually show up. So people are like "He's actually here." I take a lot of pictures. Usually when I come in, I don't get any farther than the front door, then they pounce on me. The place is very kid-friendly. We get a lot of kids because of the basketball court and lots of birthday parties.

Did you have any input on the menu? No, because in life, everybody is a specialist, so that's what they do. I'm the meeter and greeter. So if Michael, my friend, came into basketball, I would hope he would ask me anything about it, rather than him trying to tell me what to do with a basketball team. So, I've given him no ideas except for what I like — grilled salmon, grilled chicken, rotisserie chicken, broccoli, asparagus. So, I eat a very simplistic diet.

When you're not at the restaurant, where do you like to eat out? Before I was here, I did most of my own cooking with my Foreman Grill. I love salmon, grilled chicken, a lot of turkey, a lot of salad, yogurt, and nuts. I was pretty much doing my own cooking. But I have a sushi place — I love sushi. I eat eel almost every other day.

Where's your sushi place? It's on 82nd and Third. It's called Amber, and right across the street is Tiramisu — I go there for pasta and chicken. I still go there, I just bring it back to my house. And Eli's — I do all of my meats from Eli's. I eat carrot juice and celery juice. I make protein shakes.

It sounds like you have a lot of discipline with your diet. Do you ever splurge? Yeah, it's from being in sports. You're always trying to sacrifice and get better, so my diet has been in transflux evolution for a long time, so now I rarely cheat or pig out.

Do you ever think of retiring and not doing anything? I thought I would be retired around now, but now I'm on another five year plan. Most people wouldn't call what I do work. It's a blessing. And I like meeting and greeting. I've always had a relationship with the fans, and this is a continuation of it.
· All Coverage of Clyde Frazier's Wine and Dine [~ENY~]