A Look at the Bars and Restaurants of the South Street Seaport, One Month After Hurricane Sandy

Share All sharing options for: A Look at the Bars and Restaurants of the South Street Seaport, One Month After Hurricane Sandy

Throughout the next few weeks, Eater will be taking a close look at how restaurants are faring in the parts of New York that were hit hard by Hurricane Sandy. Next up: The South Street Seaport. 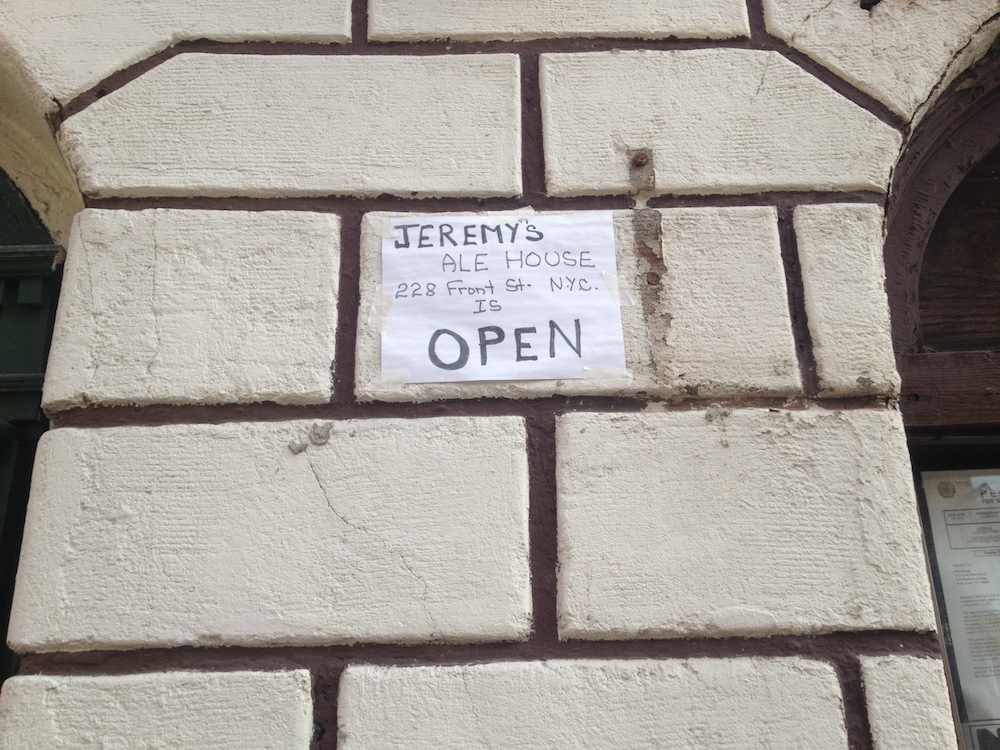 [All photos by Jackie Goldstein for Eater NY unless otherwise noted]
When Eater last did a full report on the state of the restaurants of the South Street Seaport, the situation was bleak. Today, four weeks later, there is some good news to share, but many restaurateurs are still dealing with uninhabitable buildings.

Jeremy's Ale House, the classic blue-collar-beer-for-breakfast bar on Front Street, and Meade's, a watering hole known for its fantastic brunch and humorous signage on Peck Slip, are almost back to normal. Jeremy's is not accepting credit cards and phone lines are down, but the bar is offering full food and drink menus. Meade's is adding more and more to the menu every night. The restaurant accepts credit cards through a cell phone app, but do bring cash when heading to Lower Manhattan.

Kathleen Joyce, an employee of Meade's who was born and raised in the Seaport (her father owned the fantastic and still-mourned Radio Mexico) notes: "As soon as we got our green sticker, we got to work. We didn't kick our feet." She is thankful for an upstairs storage unit (no basement storage) and neighborhood volunteers. 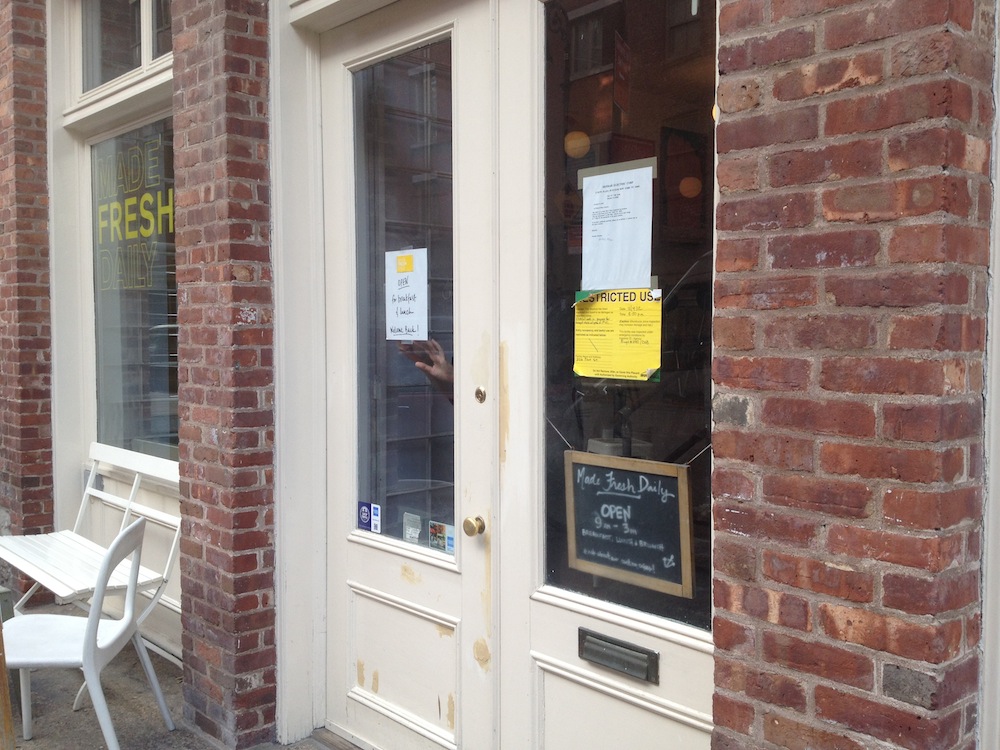 Also on the open list is Made Fresh Daily. The owners were able to get back and open rather early as well. 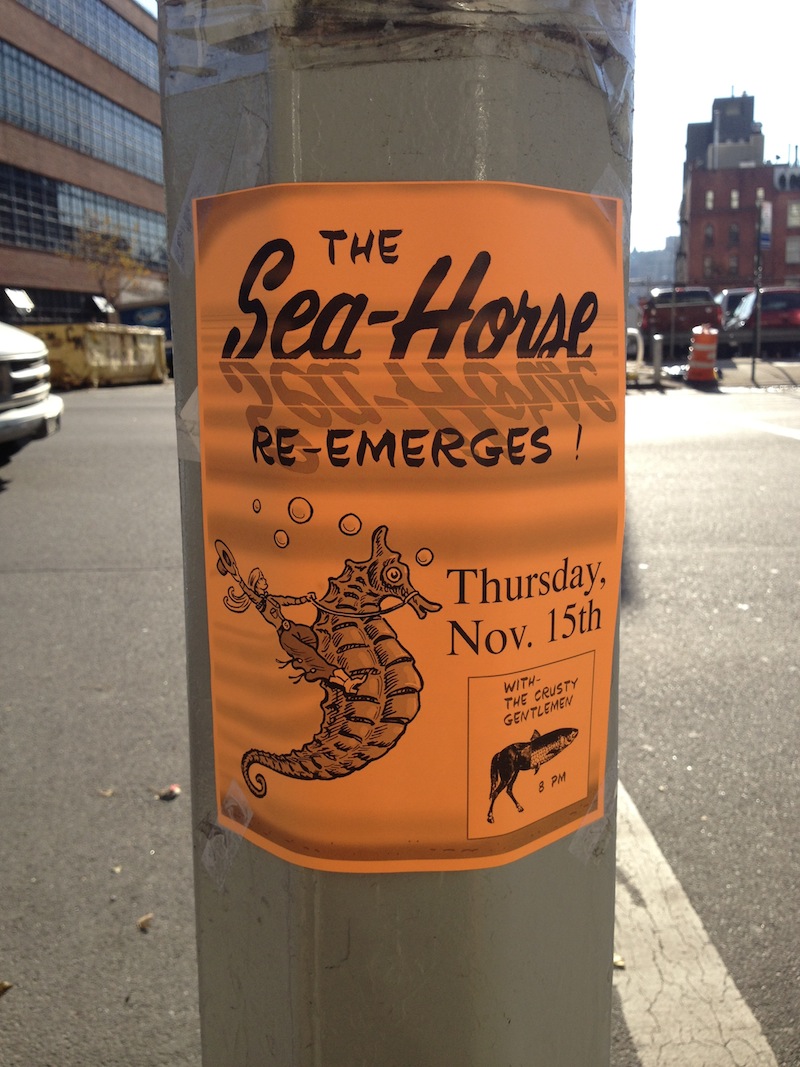 Their neighbor, Jack's Stir Brew, is trying to make it work by serving from the stoop while the team waits for the indoor space to become usable.

Also on the making-it-work-for-the-time-being list: Cowgirl Seahorse. Cowgirl had a big reopening with the restaurant's house band, The Crusty Gentleman. Cowgirl just started serving some food this week.

The owners of Barbarini Alimentari are making the best of the situation by selling goods out of the New Amsterdam Market while the restaurant is gutted, and they decide what to do next. Linda Marini, an owner, explains some of the current issues they face: "If we go back and rebuild, what's the neighborhood going to be like? Are people going to want to live near the water?" Barbarini has been on Front Street for seven years, and has really grown with the neighborhood. The community has been very helpful, but another major obstacle has been the landlord, Durst Corporation, which also is the landlord for other Seaport restaurants like Stella and Nelson Blue. Rather than making repairs building by building, Durst has decided to rebuild all at once, slowing down the reopening process for the businesses with estimates that they can reopen in around four to six months. 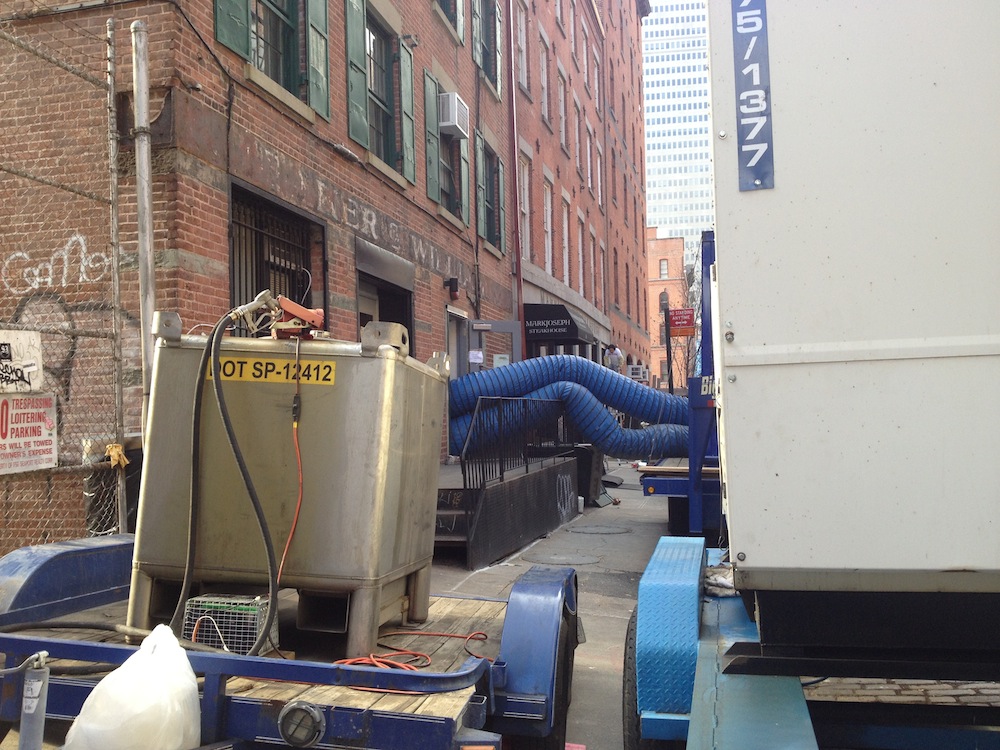 [Construction on Mark Joseph]
Mark Joseph Steakhouse on Water Street is looking to reopen next week. Carol Ann Guerriero, a longtime employee says, "Things change every minute but I'm confident we'll be open by the 4th." They have been very fortunate to have loyal customers who have helped them out as well as great employees. Carol notes: "We've been moving forward [since after the storm], and we took this opportunity to work with the bosses to build something stronger than before." December is traditionally the restaurant's strongest month. 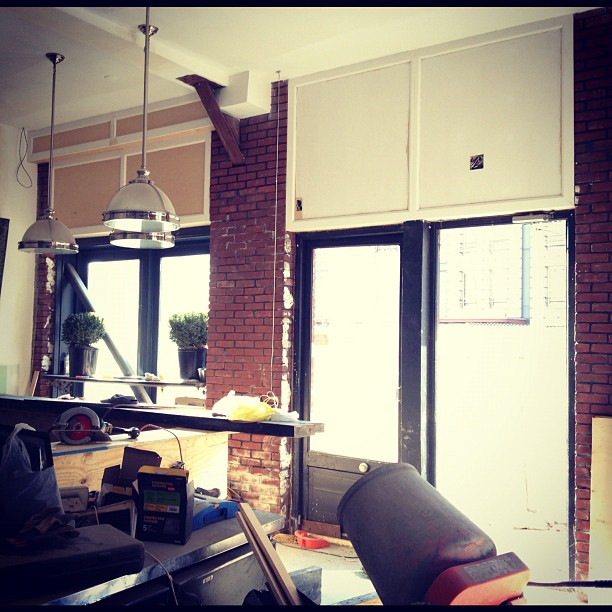 Acqua has been fundraising and has made tremendous strides. According to the restaurant's Facebook page, the owners hope to reopen next week, as well. 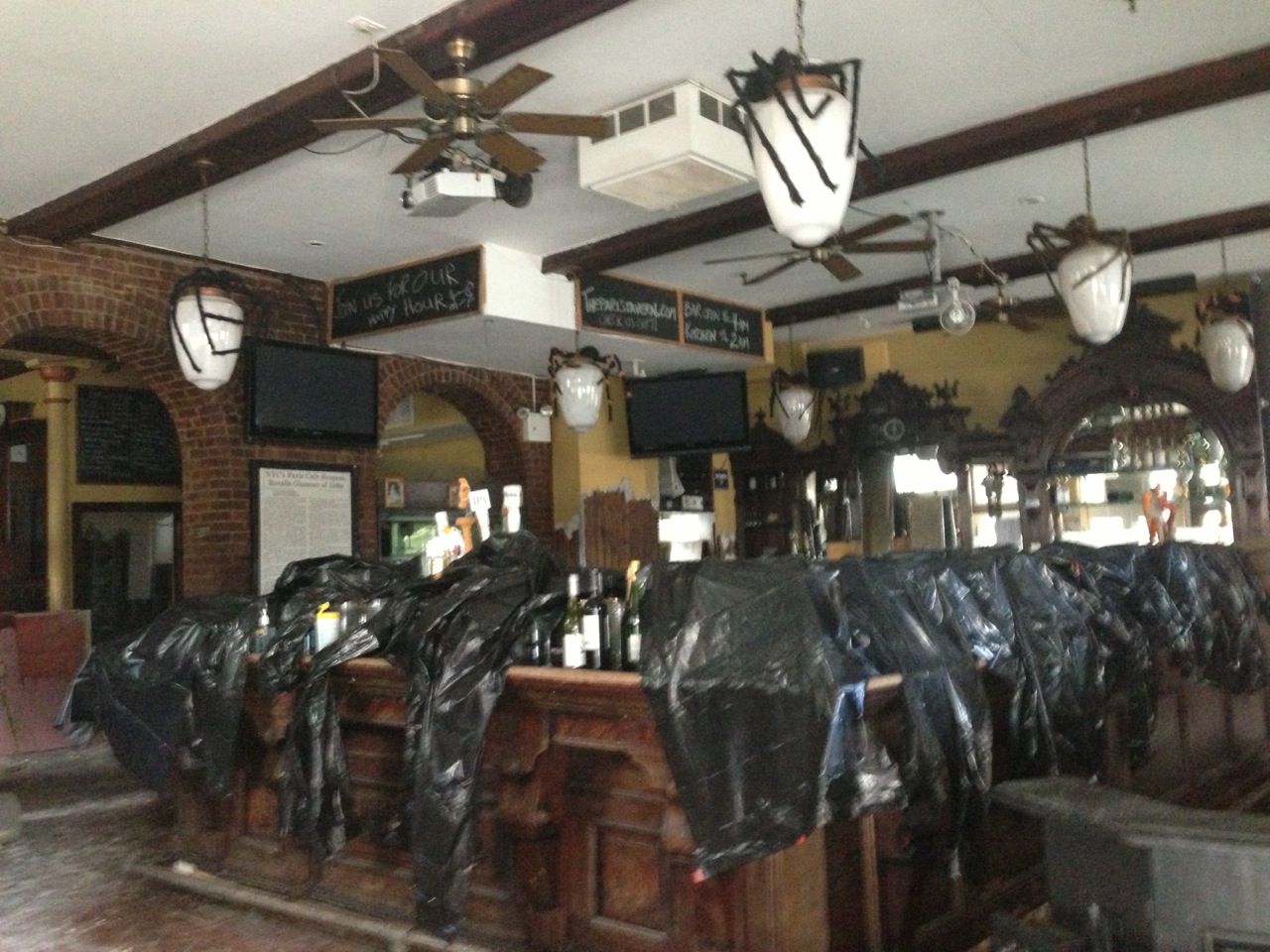 [The bar of Paris Cafe, photo by Lockhart Steele]
Many other restaurants in the area are still closed and struggling. Paris Cafe, which has been on South Street since 1873, is still boarded up. Salud Restaurant & Tapas Bar on Beekman remains closed, but the owners started a campaign on Go Fund Me. Stella on Front Street is closed. SamSara is closed. Suteishi is closed for now as well, but fans can help by going to the restaurant's Indiegogo page and buying a meal now, to redeem in the future. Sister establishments Keg No. 229 and Bin No. 220 expect to reopen in four-six months.

Overall, the South Street Seaport's Zone A community has been rather organized. At a well-attended Community Board 1 meeting last week, representatives from the Department of Buildings (DOB), FEMA, Con Ed, Small Business Services (SBA), Department of Parks and Recreation, Department of Sanitation, Verizon, Economic Development Services, Economic Development Corporation (EDC) and the Energy Efficiency Corporation (EEC) were all in attendance and gave updates. Many elected officials showed up to speak as well, including Assembly Speaker Sheldon Silver, Manhattan Borough President Scott Stringer, Council Woman Margaret Chin and Senator Daniel Squadron. Of great interest were updates on loan and grant opportunities, including loans from the SBA of up to $25,000 for businesses with fewer than 100 employees and in business for at least a year. The Downtown Alliance also announced a grant program called Back to Business with grants up to $20,000, which are available on a first-come-first-serve basis. Businesses that have reopened are eligible for this program, but those who haven't because of building issues may also apply.