A Look at the Bars and Restaurants of The Rockaways, One Month After Hurricane Sandy

Share All sharing options for: A Look at the Bars and Restaurants of The Rockaways, One Month After Hurricane Sandy

Throughout the next few weeks, Eater will be taking a close look at how restaurants are faring in the parts of New York that were hit hard by Hurricane Sandy. Next up: The Rockaways. 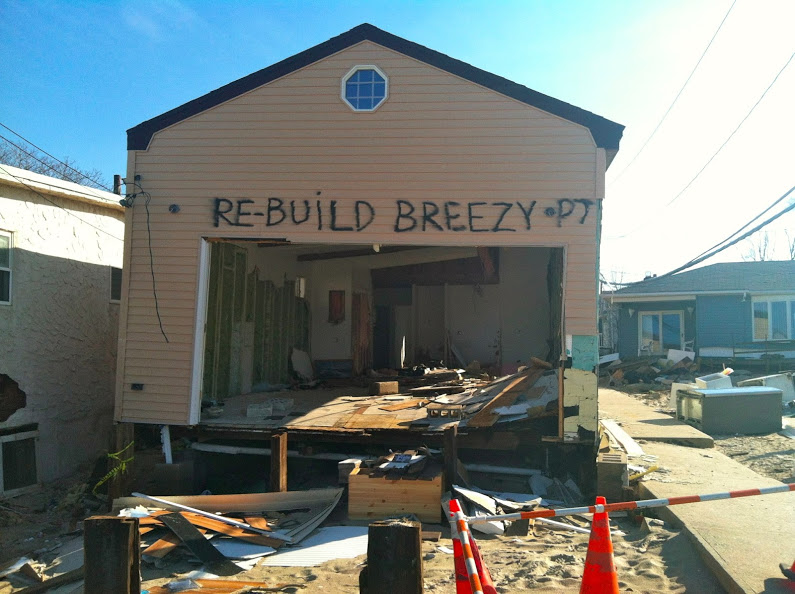 One month after Hurricane Sandy ripped through the Rockaways, it's clear that the recovery process has really just only begun. Driving around the peninsula the weekend after Thanksgiving, the area still looks post-apocalyptic. A lot of businesses, including a majority of the area's restaurants and bars, remain shuttered, and many may never reopen. And yet, while there is still much that needs to be done before the community can get back on its feet, the Rockaway spirit is strong. For now, the focus is on rebuilding.

One of the biggest losses for the community was the destruction of the iconic Rockaway Beach Boardwalk. The boardwalk's seasonal concession stands, known as the Rockaway Beach Club, are completely destroyed as well. The floor at Caracas Arepas Bar at Beach 106th Street gave out, the concession stand at Beach 97th Street had a foot of debris piled up inside and suffered severe water damange, and DiCosmo's fro-yo equipment was severely damaged. At this point, it's unclear exactly what the beach will look like next year, but Rockaway Taco's David Selig tells Eater that the RBC team is hoping to work closely with the Parks Department to bring the food concessions back by next summer. And he hints that they're not just going to rebuild, they're going to come back better than ever: "We have a chance to think forward. To take advantage of the momentum in the community. It'd be silly not to try something new, something smart and fun."

The original Rockaway Taco on Beach 96th Street had closed for the season before Sandy hit, but the plywood shack that houses the taco shop and its neighbor Veggie Island took on three-and-a-half feet of water resulting in some serious damage to both restaurants. Veggie Island's Elizabeth Bethea tells Eater that they're hoping to reopen fully by March. In the meantime, they're planning to use their space as a community hub, selling hot coffee and pastries on weekends: "There's not a lot of food out here still. It's a tough situation. We want to keep things going on this corner." Veggie Island is also in talks with the girls of Shore Fruit, a bike powered cut fruit cart, to team up for a collaborative soup-based project over the next few months. Before Sandy hit, Shore Fruit transformed its cart into a winter-friendly, hot soup delivery machine. Over the past few weeks they've been working around the clock delivering hot soup to stranded residents. For this new project, Shore Fruit will make their soup in Rockaway Taco's kitchen and sell it from both their cart and Veggie Island's store.

A block over on Beach 95th Street, neighborhood favorite Connolly's Bar, filled with about five-and-a-half feet of water during the storm. Despite the flooding, the place is actually in relatively good shape. The long wood bar survived, as did the beloved frozen drink machine. Some of the memorabilia on the wall was lost and the booths are a bit warped, but as owner Jeff Aquilante put it: "we'll just have to wear our scars with honor." With renovations slated to start in two weeks, the goal is to be up and running by the first weekend in March for the Rockaway's legendary St. Patrick's Day parade.

Another Irish pub in the area, the Irish Circle, is "taking baby steps" to get back to normal. Electricity has been restored so the bar is back in action, but the kitchen remains closed. Owner Jerry Perich tells Eater that he's aiming to start serving food again on Monday, December 3rd, once he gets his equipment checked out. A few blocks over, Dalton's Seaside Grill on Beach 108th Street, was one of the lucky ones; it didn't sustain any significant physical damage and was one of the first restaurants in the area to reopen.

A few weeks ago, Eater National took a close look at the blow Hurricane Sandy delivered to Thai Rock, a year-round restaurant on Beach 92nd Street. While the restaurant suffered some serious damage during the storm, owner Robert Kaskel told Eater he's determined to use this opportunity to build an even better Thai Rock. Renovations are already well underway, but they're still accepting donations on their website. Next door, Bungalow Bar was also completely destroyed in the storm. Ryan Whelan, an employee of the bar, tells Eater that the back deck snapped in two, the floor inside buckled, and all their equipment is ruined. They've started the rebuilding process, but it's going to be an expensive road back; the bar only had wind insurance, so any flood damage is on them to fix. That, unfortunately, is the boat many businesses in the Rockaways are in right now. 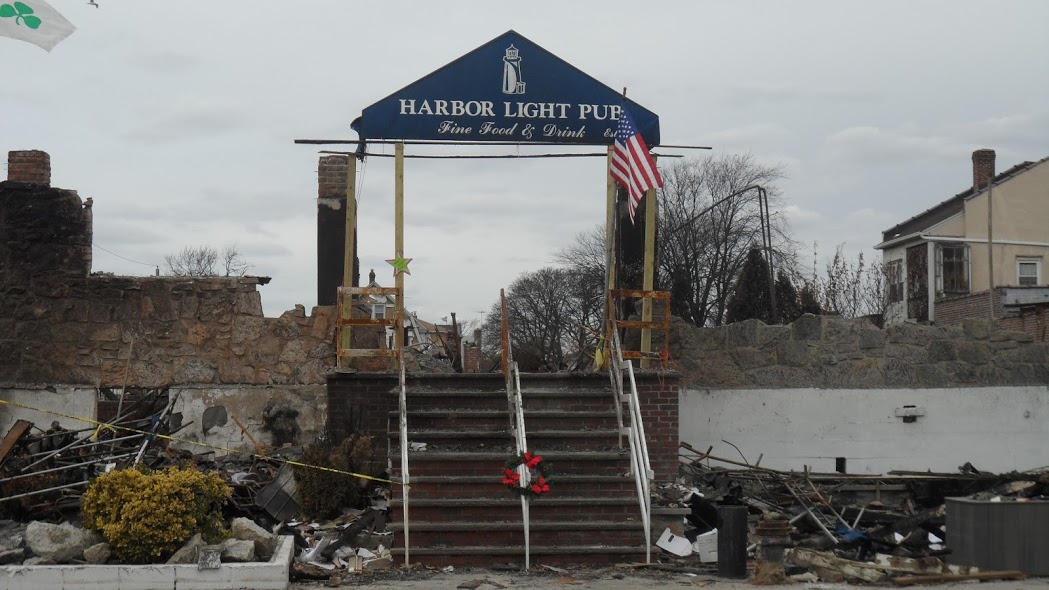 Another major loss comes from Belle Harbor, an area that has faced major tragedy before. The Harbor Light Pub, a fixture of the community for the past 33 years, went down in flames in a fire that destroyed several homes in the neighborhood. The pub's Billy Heeran tells Eater that, at this point, the future of the Harbor Light is uncertain. A few businesses on the neighboring commercial block at 129th Street have reopened (including the wine store and a barber shop), but the restaurants, including places like East Meets West, Beach Bagels, and Rockaway Seafood Co., are still shuttered while renovation crews work to fix all the water damage. UPDATE: Beach Bagels on 129th Street is open for business as of November 30. The outdoor bar at The Wharf on Beach 116th Street took a slight beating during the storm, but the treasured establishment is open as of last week with drinks and a limited menu. The rest of the businesses on Beach 116th Street are slowly coming back to life. Ciro's Pizza, for instance, has been open for the past few weeks serving up $10 pies.

At the other end of the peninsula, Breezy Point suffered some of the most dramatic damages. The Blarney Castle, located in the neighborhood's only commercial strip, was fortunate and reopened its bar service only as of last week. Other restaurants in the area were not so lucky. Just steps from Jamaica Bay, Kennedy's remains shuttered. Over the past few weeks, the restaurant's parking lot was being used as a site for various relief services and as a mail distribution center. Another beachfront restaurant, the BayHouse, was gutted by Sandy's relentless winds. Owner Sean Sheridan tells Eater that despite how bad things look, he's aiming for a summer 2013 reopening. Over on Bedford Avenue, the Sugar Bowl, a 38-year-old beachfront bar, fared even worse. It was completely destroyed during the storm; the building was flattened and the roof pushed into the house next door. One part of the ranch-style bar actually floated six miles away and ended up in Brooklyn, fully intact UPDATE: The team from the Sugar Bowl sends word that the bar in that video is not from their establishment. Owner John Timmons promises to rebuild as soon as possible, according to a report from the Rockawayist.

In the midst of all this gloominess, there's one uplifting success story. The Fisherman's Dog, a surf-n-turf style food truck that opened this past summer, was the very first dining establishment to start serving the community post-Sandy. In fact, the truck never closed. Over the summer, childhood friends Terence McNicholas and Jared Adler set up shop on a lot adjacent to Jamaica Bay. With funding from a successful Kickstarter campaign, the guys intended to stay open year round, and just two weeks before the hurricane, they'd finished fixing up their lot with nice fencing and a seating area. But then the storm hit and all their hard work was destroyed.

Luckily McNicholas had the foresight to move the truck off the peninsula, so it was unscathed. The day after the storm, the duo decided to take advantage of their good fortune to help the community, selling food out of their truck on a pay-what-you-can basis. For the next 24 days, funded by the Mayors Fund to Advance NYC, they handed out food free of charge in the lot across from Rockaway Taco on Beach 96th Street. McNicholas and Adler recently closed up their makeshift soup kitchen, but the pair isn't wasting any time; their truck is open for business in their regular location on Beach Channel Drive, and they're already looking at what's ahead.

One month after the hurricane, the Rockaways are in a precarious situation. Some businesses are going to be able to make a comeback, but others may never reopen. Local officials are saying that anywhere between 20 and 50 percent of small businesses in the Rockaways could be permanently shuttered. But the bottom line is that the people of the Rockaways are a tight-knit, resilient group that is determined to rebuild. The general feeling on the streets is that the Rockaways will be back soon, better than ever. As Terence McNicholas from the Fisherman's Dog put it: "Slowly but surely, the sun will come back."

Special thanks to Vince, the blogger from the Rockawayist, for guiding Eater around the Rockaways last Sunday.