Share All sharing options for: Restaurateur Jim Chu on Staying Open During Sandy

Over the next few days, Eater will check in with downtown restaurateurs, and learn about their Hurricane Sandy experiences. Right now, Jim Chu, the proprietor of Jo's in Nolita, shares his hurricane story. 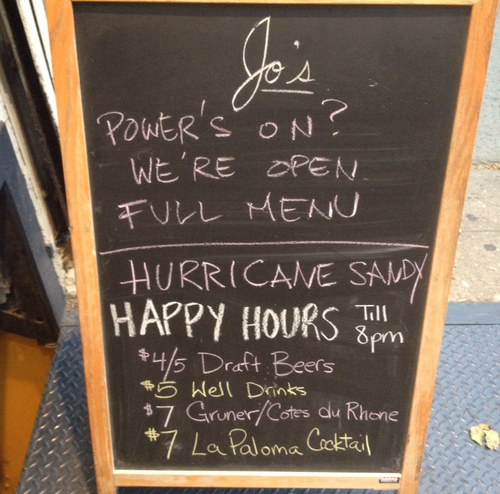 About Sandy: We are so lucky that our restaurant had limited physical damage. No broken windows, no flooding. From what has happened to our neighbors to the south, this is literally the best of a worst case scenario.

As some of our neighbors know, we stayed open during Irene last year. An industrious investor had a Jeep and picked up a bartender from uptown who saw that her rent needed to be paid, and my business partner Johnny cooked with an arm in a sling (from a motorcycle accident) while I helped out and plated. Regulars ran food, and people patiently waited while Johnny and I had the time of our lives. A one armed man and a guy who has never done more than work a Garde Manger shift or two running around washing dishes while cooking and taking orders. It was awesome. I drove guests home who were stranded, and that was it.

Our guests were grateful for us to be open, and for many who were there, they enjoyed it as much as we enjoyed serving them.

This year, I could hear the concern in my business partner's voice when he reminded me that the bridges could be closed due to winds. My thought was, "Really? They'll open them right back up." He stayed in Brooklyn.

I had a dishwasher and three rock solid line cooks who wanted to work, especially if we might be closed for a few days. The bartender had heard about how much fun it was to be in the storm last year, and my girlfriend decided to help. This would be a cakewalk. Those who know me have heard me say, "Working in a restaurant with proper staff is like cheating."

The sign in front of the restaurant said, "We're open until the power goes out."

Part of my enthusiasm came from wanting to relive that moment from Irene. Totally foolish, probably insensitive. But the other reason was that I live in Zone A. Bloomberg said to evacuate. I evacuated to work. Worse comes to worse, I thought I could stay at my dad's place nearby, and Jo's is on high ground. The fact is that I would be freaking out if I weren't at the place, anyway. Many restaurateurs smarter than me took the night off.

The night started off great. Our neighbors stopped in, and by the time dinner was
getting ready, things were humming along. My girlfriend even took a couple of delivery orders that were close by. Guests of the Nolitan came through. I let them know that we were open. The kitchen staff was getting nervous they couldn't get home. I assured them that I had an all-wheel-drive van parked outside, and that they would get home the same way they got to work — with a ride from the boss.

Then I got a call from my neighbor on 11th and C: "The water is coming up kinda fast." I told him not to worry. I had pumps all set, and there wasn't anything I could do about it if it were bad, anyway.

The crowd was having a great time. A couple was celebrating their anniversary and dancing in the dining room, our neighbors were all talking about the storm, and...

At the peak of it, the lights flickered. The POS terminal froze.

I called out to my staff to start printing checks. I got a text from my partner that read, "All East River bridges are closed." Then the lights went out, along with the music. In the weak glow of candlelight, there was a near dead silence. Then everyone got the OEM message at the same time

OEM: GO INDOORS IMMEDIATELY AND REMAIN INSIDE. DO NOT DRIVE.

At that moment, I felt like maybe this wasn't the best idea. I broke out the hard checks and kept the tabs manually. People started streaming in. The feeling was that there was a lot of anxiety in being cooped up in the dark alone. At least we were cooped up together. There aren't any big trees near our place, and the wind really wasn't that bad, and there was no rain. So we stayed open.

When a cop stopped by and berated me for "endangering the lives of my neighbors" by keeping the place open. It was like a scene in a movie. Bad cop wanted to kick my ass for being a menace to society, "These people should be at home." Good cop realized, "This guy's a grown up — he knows what he's responsible for." The truth lies somewhere in between.

My kitchen staff was wondering when that ride was coming. Two decided to catch a cab on their own. I didn't have any good answers. When the bridges didn't reopen, we had to find a place to crash, or risk driving through the storm. Two cooks hunkered down in the restaurant and the rest of us split uptown after doing as much cleaning by flashlight as we could. We iced down the seafood, drank a toast, and I swore to God I was going to get those cooks home the next day.

I did, and with armloads of steak and a giant red snapper, well seasoned with apologies for not getting them home the night before as promised. When we realized the power wasn't coming on anytime soon, we turned attention to our neighbors. Not so much for the young who inhabit the area around Jo's, but for the senior citizens in my father's building in the East Village.

I was in no position to make myself a sandwich much less serve a hot meal. But donations to the seniors were sitting in the management office, and there's nothing like working off the stress with 20 flights of stairs.

Tuesday: Tried to find a generator.

Wednesday: Spent five hours with people from all over the city and Long Island waiting for a truck with 125 generators — all sold out. Johnny and Chef took a look at the damage and figured it's not worth opening unless we can open for real.

Thursday: Started cleaning up. Running that generator is like music — especially when I found the way around the two hour line for gas. 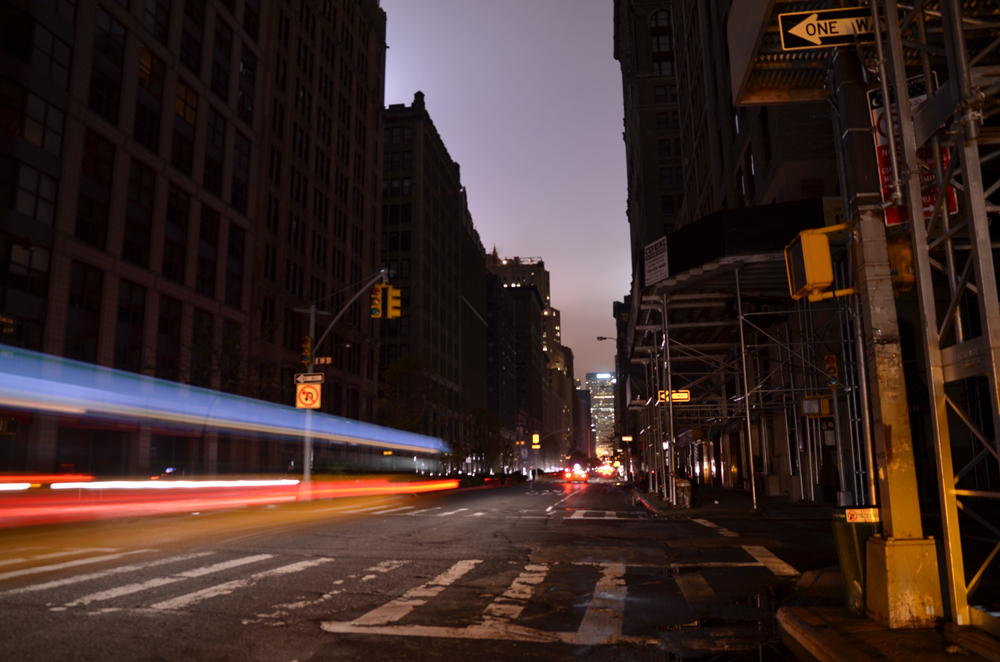 I stopped to take this photo on the way home. It's been so weird going back and forth from disaster zone to civilization. I have been picking people up on the street during my travels, just like Mayor Mike says. That's been a trip on its own.

Jo's plans to reopen tomorrow, when the lights come back on.