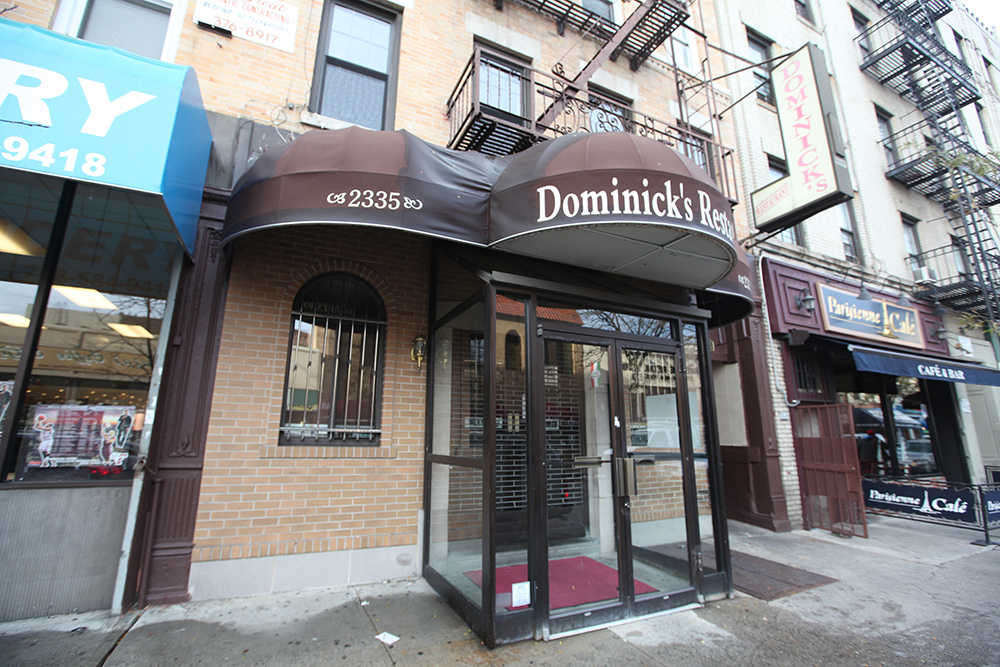 [Bess Adler]
An old Italian lady gets out of her car on Arthur Avenue. With her is a woman on crutches. She is younger but somehow less spry. "So, where shall we eat?" asks the younger woman. "Well," says the old lady in a voice of authority, "there's Dominick's—that's one."

There's Dominick's. The Arthur Avenue area of the Bronx boasts many fine, and not so fine, Italian restaurants. But when you think of the street, a few names pop up immediately and always: Mario's, Roberto's, and Dominick's. I've had good food at all three, but at Dominick's you also get an experience. It is one of those New York eating institutions with its own don't-ask-just-eat way of doing things. Basically a Roman tavola calde removed to The Bronx, seating is communal and—if you're not a regular who long ago memorized the bill of fare—you have to rely on the waiter to find out what was cookin'. Prices remain a mystery until the waiter announces how much you owe at the end of the meal. And you pay in cash; no cards accepted.

Things have changed a bit in the past year or so. There actually is a single menu now, with prices, displayed outside the restaurant. "We put it there last year," explained my waiter. "That way, people who don't know can study it and figure out what they want before they come in." Exactly what I did. Others, however, weren't so happy about the change. As a large group of thirtysomething men—obviously natives of the neighborhood returning for a visit—filed in, one spotted the menu. "Prices?!" he snorted in disbelief. "When did that happen?"

If you ignore the menu and sit down not knowing what you want, be prepared for the waiter to unroll his spiel. "You like pasta? We got got pasta with white clam sauce, with red clam sauce. We've got chicken scarpariello, chicken marsala, chicken francese. You want veal? Veal parmigiana, veal picatta, veal sorrentino, veal and potatoes." He'll keep going until to pick something. Often, uninitiated diners just give in and have the waiter decide. He usually chooses well.

I knew what I wanted: Linguini all Gianni (with diced shrimp and clams, one of the best pasta dishes in the city), and sides of sausage and broccoli rabe. All were delicious, and I couldn't finish any of it; portions are huge. The wine ("red"—no other specifications) came in a juice glass, and the espresso came in the same sort of glass. Neither were good, but I loved the way they were served.

Dominick's, which is run by Charlie DiPaolo, was founded on the location it now occupies about 50 years ago. Old photos show a sweet wood-marble-and-tile place that looks more like a cafe, and was called Caputo's. Stools, tea tables, big coffee urn. That place is gone. The relatively charmless interior of today is one of generic artwork and everyday decor. (Specifics on the joint's history are hard to find.)

The place is routinely packed, with both locals, and, more commonly, people who used to be locals and now make a point of eating there whenever they're back in the borough or back in the city. Celebrities often stop by on their way back from attending a Yankees game (Adam Sandler) or playing in one (A-Rod). Based on the faces of the non-famous diners, you'd think that Arthur Avenue was still a purely Italian-American community. That said, there is some diversity among the clientele, and all are made welcome. Even an obvious non-Bronxer like myself. "$39," said my waiter when I asked to settle up. I left the money on the table. "So, I guess we'll see you again, huh?" he said as I reached for the door. Yes, I guess you will.
—Brooks of Sheffield
· All Editions of Who Goes There? [~ENY~]