Ed Schoenfeld Looks Back on Year One of Red Farm

Share All sharing options for: Ed Schoenfeld Looks Back on Year One of Red Farm 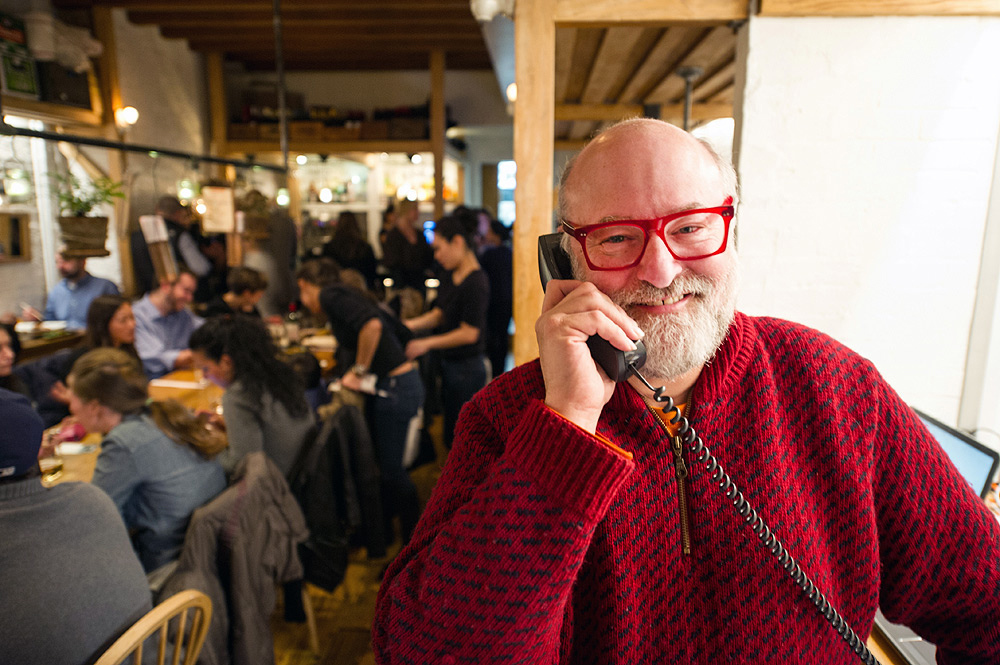 [Daniel Krieger]
Ed Schoenfeld is a walking encyclopedia of Chinese food. At the beginning of his career, he worked at one of New York's first four-star Chinese restaurant, Uncle Tai's Hunan Yuan, where he learned the intricacies of the cuisine. He's monitored every shift in the Chinese food scene over the past 40 years, and somewhere along the way, he developed a very specific idea of what New Yorkers love to eat, and how to serve it to them. His West Village restaurant, Red Farm, was a hit right out of the box. Now, he and chef Joe Ng are planning a new location on the Upper West Side, and according to Ed, there are many more possibilities for expansion on the horizon. Here's a look back at year one from Eddie Glasses:

Ed Schoenfeld, owner: We had a very controlled opening. We went through a very large amount of friends and family, more than most restaurants — about three weeks full — so that we could really get our feet wet and get it right. I have a strong belief in the public and word of mouth being enough to make a restaurant successful. In the past, a lot of us have counted on reviews to make your restaurant successful, and I think that is something that can get customers in the door, but it doesn't keep them coming back. So, opening a little slowly and practicing, you know, taking the show on the road before it opens on Broadway, is very helpful in our business.

Was it fun for you to get back on the floor and work in that maître d' role again? Well, that's always been something that I've found fun, and now I still do that — I worked the door last night. But part of my goal is to set up my front of the house people to be able to perpetuate relationships with our customers. We have the kind of culture where we try to know each of our guests.

What was the review process like? Before we opened, I made the comment to someone that I have the best restaurant in the country, and some critics said that I was ridiculous for saying that. You know, it was provocative, and I think it's true. If you look at Joe's dim sum work and all the little small things that he makes, that really reflects a super high level of craft. You have Danny Bowien's take on Chinese food, and his point of view, and it's interesting to me that both he and we have proclaimed that we're not authentic at all. We're not trying to be authentic. And we're both cooking with pastrami, and I can show you other restaurants that cook with pastrami, too. But Joe is making dumplings of roast duck and vegetables and shaping it to look like a skate fish with a tail and eyes and extruding the dough on one end to give it a certain shape. That's the kind of refinement that, as someone who has chased really fine cooking all his life, you don't see too often, and you only see in a rarefied situation.

So to get back to your question...As far as the critics go, I really liked what Pete Wells wrote about us. How could you not? It was incredibly laudatory. I don't know Ryan Sutton at all, and I definitely enjoyed reading him, but for him to kind of dismiss our restaurant and trash it is kind of fundamentally wrong. Certain things are a level of taste, but certain things are like good and bad. And it would be hard to look at Joe's work and say that it is not really skilled and really good. Anyone who doesn't believe that I think doesn't have a strong professional knowledge of the subject they're writing about.

So, is part of the business model here to make something crowd pleasing, but also with a certain level of refinement? Is that how you see Red Farm? I think that you actually are on the money. I think we have this level of craft and this centrist point of view in terms of making food that the majority of people really want to eat. It's very, very popular, instead of very, very esoteric. I think we could actual be criticized for not having enough esoteric food. The reason for where we're at is Joe, not me. People want to eat fairly mainstream stuff by and large in the whole country. So at Red Farm, we have a menu that has some esoteric stuff, but what we're selling is the lobster and chicken and duck and stuff that is very approachable. And I think that its approachability combined with the quality and freshness of our ingredients, combined with our sophisticated understanding of how to prepare them? That's the winning formula for us.

How will Red Farm Upper West Side be different? Well I think the idea and the concept is going to be mostly the same. But that being said, I think that we'd like to not make a cookie cutter out of it, and have it just evolve a little bit. And when you have a business, some things work better than others, and you learn from those things. But you know, it's a relief that the restaurant is going to be evolved and informed by what we've already done. Get rid of the dogs and take the things that work and do them, or do things that are different than they are, but similar. And it gives people the opportunity to go to both restaurants and have a little different experience.

A few years ago, you mentioned that you wanted to set up a series of facilities that would allow people to order from Red Farm anywhere in the city. Is that still part of the plan? We still have that goal. Projects evolve in their own ways and this project has evolved in a little bit of a different way than I had anticipated at first. You know, at first we thought that we might only open takeout places. Now we're extending it and opening a second one and we don't have any truly takeout locations, so we certainly still have that idea, and I certainly still think it's a good idea. I'm just uncertain as to what is going to happen with it.

Do you want to open another location in 2013, or just focus on the two for now? When you open up a place like Red Farm and it's been as successful as Red Farm has been...I really think we've raised the bar in an industry-wide way, not just in NYC, but throughout the Chinese restaurant world. And we've had a lot of people who have stood up and taken note of us — people from Shanghai, Hong Kong, London, Dubai, and Cincinnati.

So we've had a lot of opportunities, and people have come to us with opportunities. Which ones we end up taking advantage of and doing? I don't know. I can't say we have any specific deal in place, but I think we're definitely increasing and growing beyond these two units. And at the same time, I kind of believe in success the old-fashioned way. You know, we're just going to evaluate the opportunities that come our way. We've got hotel chains and developers and marketplaces, and I believe that a place like Red Farm would be extremely successful in that kind of place. And we're also still quite interested in bringing food products to the marketplace under the Red Farm brand. So, we're definitely looking and pursuing some opportunities in that arena, and that's something that we're looking at harder now.

Are you thinking about sauces, or a food line? I think that there is room in the marketplace for a premiere Asian food brand. A high-quality Asian food brand that has condiments, that has dumplings and noodles, and that may even have certain kinds of prepared foods. This opportunity, I think, is very substantial, because if you start to ask what's the best Asian brand in America, I guess you would probably say Kikkoman at this point. You know when I was kid, it was La Choy. And I don't think any of those really have lived up to their potential. Asian food has become very mainstream food — not just in New York City, but all over the country. People eat sushi all the time. Boston Market opened up to be the home replacement restaurant — get a roast chicken and bring it home. Well, Chinese food has really really grown in that area, especially in a place like New York City. It's the number one food to bring into the house.

So, I think that this is an opportunity for someone to bring a brand to the marketplace that not only has soy sauce, but has miso sauce and stir fry sauces. Like in the dairy case, when you see fresh Italian pasta? I think there is room for fresh Asian pasta. And a few people have ventured into this. There are websites that are selling this stuff now, and websites that focus on Indian food, and other kinds of Asian cuisines, but I think there is room for this American-Asian brand that's good. Which is kind of why we came up with the Red Farm name. And, hopefully, this is an area that we can grow into over the next couple of years, and grow into other areas too, and take care of what we have.

I think Red Farm on Hudson Street is just getting started. We have 15 full years left on our lease there, and I fully expect to take good care of that restaurant a number of years from now, and keeping these places very vital and hopefully iconic. I think there is a very good spot in the marketplace that we've hit, in a very meaningful way, and I'm very excited about that. In much the way that Danny Meyer has become famous for engendering a type of hospitality that has really become his calling card among other things...I think that's the type of ability that I have with staff, and that if you come into Red Farm, it's pretty evident. We have a very informal way of dealing with our guests, but it's pretty effective. I get a tremendous number of compliments on how well taken care-of my guests have been.

Does it feel like it's been a year at Red Farm? Well for me, it's been three years. We signed the lease in 2009, so we had this space for two year, before we opened it. So it does seem like it's been a long time since we got the space, but the actual year of operation has gone really quickly and it's been really fun. I mean, I have a restaurant at a point where it really works well. We have fun customers, we play with them, the food is playful, and the whole experience is good. And anyone in the hospitality business will tell you when the restaurant is empty, the night feels like it goes forever, and when the restaurant is full, it's over before you know it. And we're full all the time.
· All Coverage of Red Farm [~ENY~]
· All Editions of One Year In [~ENY~]