Over Two Weeks After Sandy, Normalcy Far Away for Many New York Area Restaurants

Share All sharing options for: Over Two Weeks After Sandy, Normalcy Far Away for Many New York Area Restaurants

The Rockaways on Tuesday. [Amy McKeever]

Hurricane Sandy, which hit a little over two weeks ago, continues to have a lasting effect on New York City restaurants. In the incredibly hard hit Rockaways, for example, Rockaway Taco is still just being used as a distribution site, as for most residents and restaurants the process of recovery is still in its beginning stages. The focus is on relief, rather than normalcy.

In the last week, Robert Sietsema of the Village Voice has taken bicycle tours of Coney Island as well as Sheepshead Bay and Gerritsen Beach, and in all three areas most restaurants remain closed. But even for restaurants that have been able to reopen, any sense of normalcy is still a ways off. While it's impossible to tell every story at any given time, here's a look around the city to see how the restaurant industry is doing a couple of weeks after the storm.

In Red Hook, 'Bartenders Without Borders'

Much of the media focus in the last two-and-a-half weeks has rightfully been on Red Hook. So just how badly did the storm affect the neighborhood? At Red Hook Bait & Tackle, a nine-year-old bar on Van Brunt Street, the floodwaters completely inundated the basement and rose 30 inches in the barroom itself. Two weeks on, owner Barry O'Meara tells Eater he has completed the "throwing away" stage and is now working to replace his damaged electrical, refrigeration, and draft systems. 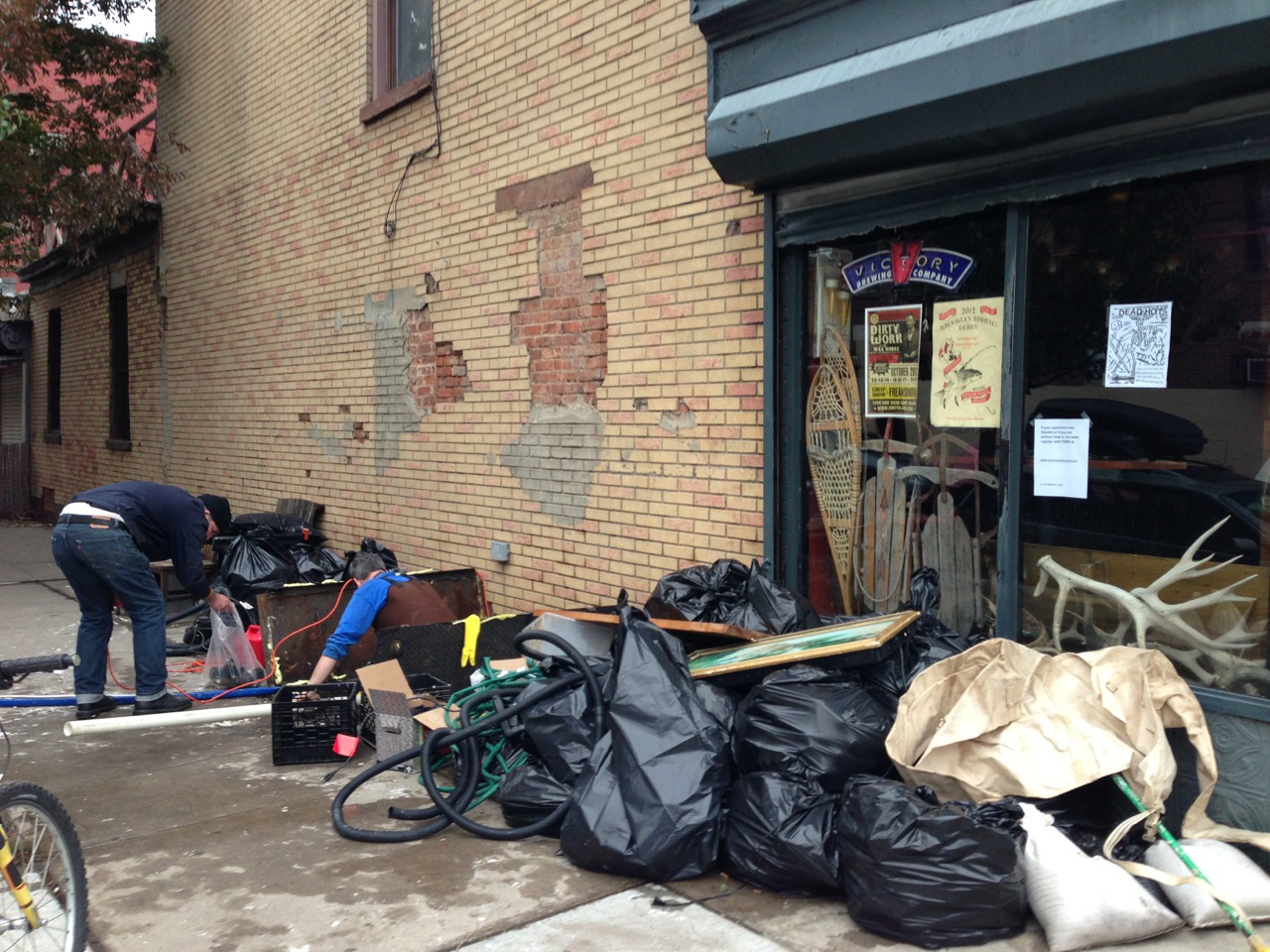 Luckily, Bait & Tackle was able to open the day after the storm?at 3:30 p.m. on Tuesday, October 30, exactly 30 minutes later than normal?and has opened every day since. Why? "Because I think people need some place to go," says O'Meara. But with the damage to the fridges and draft system, O'Meara and co-owner Derrick VanDuzer have been selling beer from a satellite bar of sorts, keeping the brews in garbage cans filled with ice borrowed from a neighboring bar. O'Meara's likened this process of sharing and borrowing to "Bartenders Without Borders," with neighborhood bars and restaurants sharing resources and even staffs, giving work to as many people as possible while the neighborhood attempts to get back on its feet.

The video for Bait & Tackle's Kickstarter, created by friends to help the bar get back on its feet. Get more information and donate here.

As rebuilding continues, several of the neighborhood's businesses have started funds for friends and strangers to help. Bait & Tackle has a Kickstarter, while Red Hook Lobster Pound launched a gift certificate campaign on Smallknot and Fort Defiance is selling junk bonds. (Fort Defiance owner St. John Frizell is also blogging about the recovery on Epicurious.)

All told, though, the efforts in Red Hook have been overwhelmingly community oriented, with these individual campaigns coming in addition to?rather than instead of?the efforts of ReStore Red Hook, a non-profit created by business owners and neighborhood leaders in the area to help all the businesses in the area come back. As board member Julia Rhodes Davis tells Eater, ReStore Red Hook is based on the idea that "one business on its own in Red Hook cannot survive. They survive when they are all there." 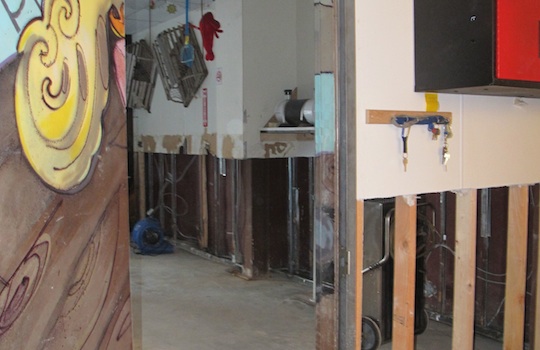 At this point, Davis says that ReStore Red Hook has raised about $75,000, primarily through small private donations. The ultimate goal is around $2 million, which is the amount estimated that it will take to get all the neighborhood's businesses back to normal. But even then, Davis is quick to note, it will be "a new normal." Understanding that there's a decent chance an event like this could happen again, the focus will be on, simply: "What do they need to do to be safe long-term?"

As Davis notes, among the bigger concerns for Red Hook restaurants?as well as the worst-affected throughout the region?is the thought that this story could be forgotten once the news cycle moves on.

Over in Manhattan, many business owners in the South Street Seaport already feel like the news cycle has forgotten them, according to a Fox 5 News report. This part of #ZoneA was post-apocalyptic after taking a direct hit from Sandy's flooding. Many of the area's restaurants remain closed.

Among those that were severely damaged is Acqua on Peck Slip, where the storm destroyed every single piece of equipment in the restaurant, as co-owner Daria Spieler tells Fox 5. Despite that, she and her sister hope to reopen in three weeks. While that doesn't seem like a terribly long time, that target would put the restaurant's total time closed at five weeks, a devastating length for any business.

Up in the East Village, Avenue C suffered the worst flooding, and things look only a little better. Hamid Rashidzada, owner of the bar Summit, put it most succinctly to DNAinfo yesterday: "We are still at half mast and are not full sail yet." With a refrigeration system that's still down, Rashidzada is bringing in 700 pounds of ice daily in an attempt to stay open and get some cash flow while undertaking the necessary repairs. Despite running $5 cocktail specials every night, according to DNAinfo, Summit is doing only 25 percent of the business as normal.

A Brighter Outlook in SoPo

Two-and-a-half weeks on, many of those restaurants that didn't even suffer any damage are nevertheless still feeling the effects of Sandy. Many in the large swath on Manhattan that lost power?the short-lived but evocative SoPo neighborhood?lost out on several days worth of income and lost tens of thousands of dollars worth of inventory to spoilage. Ginevra Iverson of the East Village newcomer Calliope tells Eater that it's unclear how much of that loss insurance will cover, but that it almost assuredly won't be the full amount lost, nor will it be immediately available to help with November or December rents or payroll. 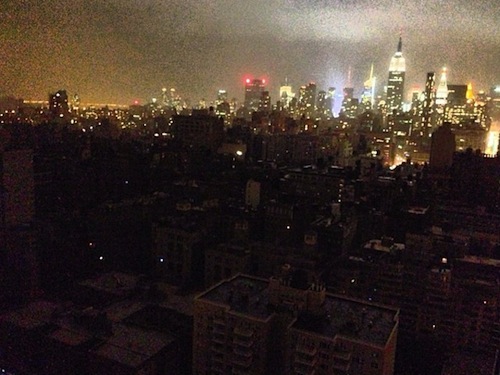 Calliope, which Iverson owns with her husband, the chef Eric Korsh, received a glowing one-star review from Pete Wells at the beginning of October, giving the restaurant a whole lot of momentum that was stopped abruptly by the storm. Iverson says that because of that recent boost, "We don't have a normal," but that business is back to the same level as before Sandy on weekend nights while down about 40 percent most other shifts.

Of course, in yet other areas, the situation is much worse, and chefs and restaurateurs from comparatively-unaffected restaurants that Eater's talked to over the last few weeks are quick to point out how lucky they've been and that there's still so much work to be done. In Dumbo, restaurants were destroyed but hoping to reopen, like Governor and The River Café, or they were damaged but now operating in a limited capacity as they work to rebuild, like 66 Water. And in the Rockaways and Staten Island, especially, recovery has really just begun. But as Barry O'Meara from Red Hook Bait & Tackle put it: "What I've lost is a lot, but it's only money. But what I've gained is lots of love from neighbors and friends and family."
· All Coverage of Hurricane Sandy [~ENY~]