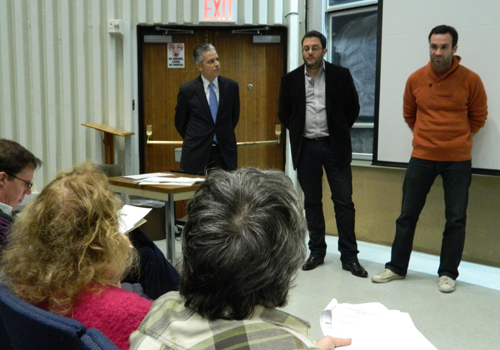 Sticking to a strict 10 p.m. evacuation agreement with NYU's Meyer Hall, the CB2 finished early last night, nearly a half hour before the deadline. But the eight teams on the agenda weren't skipping home — all of them were unanimously denied recommendations to the SLA. Among them was Stone Street restaurant mogul Peter Poulakakos who proposed a bi-level fusion restaurant with a downstairs martini and wine bar, . Update: Poulakakos's proposed project is not Dead Rabbit, but rather an unrelated proposal.

Different from his other properties like Adrienne's, Vintry Wine and Whiskey, and Ulysses, he described the restaurant as chef-driven, citing that a noteworthy chef who could not be named because he/she still works at another restaurant, will join the team. Though audience members made claims that Poulakakos' establishments employed local youth and respected the community, the board was convinced that transforming the former lighting store in to fully-licensed restaurant with a 4 a.m. closing time and DJ would oversaturate the block.

Representing the former Barmarché space on Spring Street, Oliver Strumm first defended his reputation as a restaurateur (and certainly not a sports bar owner) before sharing his Mediterranean concept. He said current Café Select chef Ingrid Roettele, who snagged a 2011 Michelin star for Heartbreak Cafe, will prepare lunch, dinner, and brunch at the spot. Though he plans to soundproof the space and surveyed area residents, the committee complained of oversaturation again, saying that they recently approved another full liquor license in the Nolita area.

The owners of another questionable sports bar, Toby's Public House, received flack from the community for trying to expand their license to a sidewalk café. Board members remember that the restaurant was narrowly approved by the SLA and told "don't come back for an expansion anytime soon." Area residents brought in images of the space jammed with jerseyed diners during last year's Euro Cup. Though owner Christine Iu demonstrated community support during Superstorm Sandy by serving free pizza from the restaurant's wood-burning oven, she was not able to convince the board that she was a considerate neighbor.

Other highlights: Local Mexican chain Toloache looks to expand its punchy margarita empire to Greenwich Village in a former lounge on 205 Thompson St. While more communication between residents is needed, the committee shares happy glances in overviewing the menu. "It looks delicious," board member Elaine Young said.

An "inexpensive, but good-quality" Japanese restaurant hopes to serve beer and wine out of the old Focacceria space on MacDougal. South Brooklyn Pizza got a thumbs down for the cheap draft beer and dollar slice model at 190 Bleecker St. The owners of a new project called La Bella Vita need more community support before they can serve beer or wine in the old Benito II space on Mulberry Street.
— Ashley Mason
· All Coverage of First Word [-ENY-]