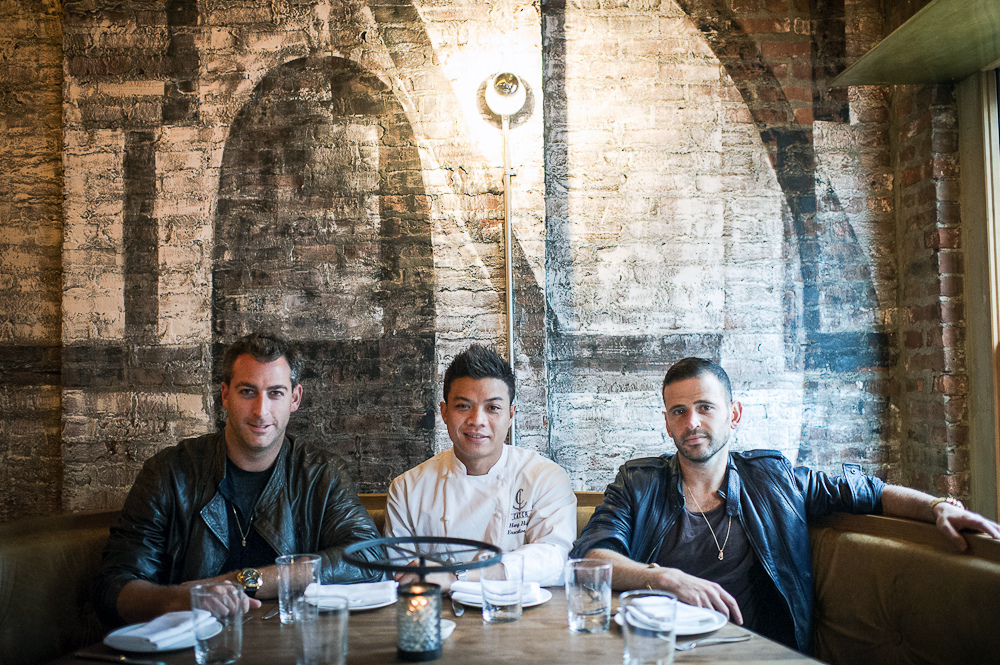 [Mark Birnbaum, Hung Huynh, and Eugene Remm, by Krieger]
Catch is the club/restaurant that might change your mind about club/restaurants. It's big, it's crowded, there's loud music and a lounge upstairs, which is frequently filled with model-types. But the food is surprisingly good, the space is comfortable, and the vibe is fun and inviting. Eater recently chatted with EMM Group head honchos Eugene Remm and Mark Birnbaum and chef Hung Huynh about the first year of Catch, and what they've got planned next.

When did you first get the idea for a restaurant like Catch?
Mark Birnbaum, owner: I think it was two years ago. The landlords of the building are friends of ours, and it's a big corner in the Meatpacking District that we walk past every day. We knew Sephora was coming on the ground floor, so we never even thought of this as a restaurant space. But our friend said, "Come take a look at the second, third, and fourth floors of this building. You might find it interesting." So we looked around, we saw a lot of windows, and ultimately there was something really nice about being removed from the chaos of what is now 9th Avenue traffic. It took us about a year and half to build and re-do all that stuff.

Eugene Remm, owner: We saw that there is no traditional seafood restaurant in the neighborhood, and because the majority of our properties are in this area — it's where we eat and dine on our own — we actually appreciated the fact that it was on the second and third floors with a side entrance.

Mark: And we like the "arrival moments." We like people walking into this alleyway on 13th St. and not understanding what they're going to see, and coming up that one floor on the elevator. When it opens up, it's like, "Wow, I was not expecting this."

Eugene: It's not a tucked-away little 50-seat restaurant. It's a massive space. So to have something so tucked-in on a side street, and then to walk into something so vast and so full of high energy with so many moving parts...It's really a great arrival moment. So, we came up with the idea to do seafood, and then the next part was finding an amazing chef to execute the concept. We tested maybe 10 or 15 different chefs, and the second we tried three things from chef Hung we knew, hands down, that he was the best person for the job and a perfect match for our company. It's been a fantastic year.

What are the challenges of putting together a big menu and a kitchen staff for this space?
Hung Huynh, chef: Well, we have a lot of variety, but everything is designed so that it's tasty and it can be produced so that the quality is not sacrificed when we do 500 covers a night. Everything that's on the menu has been tasted and approved by like 15 people, from owners to directors to different chefs to managers. We all sit down two or three times a week and taste each dish, and taste it again. The next week we'll taste it again and be like, "Oh, something changed. It's missing a gram of salt. Fix it again. It's not right do it again." And then you say, "Okay fine you got it, let's put this on." And then you have this whole list and it shrinks down to what makes it on the menu. So, there was a lot of trial and error.

Eugene: We've realized that this restaurant is driven by food, and the food has to come first. And then after the food and the service, then comes the environment. And if you are able to hit on every one of those levels, that's when I think you have a successful restaurant and the ability to do the 600 covers, day-in and day-out.

So how did the opening go? Did people check it out?
Mark: Well, the way we do openings is really having a series of openings, and not one big night where it's one big party, because we've always found that nobody wins with that. People that are inside are annoyed because it's too crowded. The people that didn't get in because it's too crowded are annoyed with you, and the kitchen gets slammed. It's not how we do it. We like to hit as many different demographics as possible over a two-week period. So we happened to open during Fashion Week last year. We have the event stuff, we invite different worlds of people on different nights, so everyone can go and say hi to each other, and let them do the work of telling everyone how they liked it. And again, slow and steady wins the race, especially because when it comes down to food, first impressions are everything.

Did this staggered opening help you?
Hung: Definitely. It helped us find what works better.

Mark: When we first started with the Cantonese lobster, we all liked the messy factor, but when we finally tested it out on people, we found it was too much work, too hard to get out of the shell. They loved the sauce, but the problem was the sauce was all over your fingers and you need extra hot napkins. So Hung goes back and says "Wait. We don't change the recipe, we change the way we're presenting it." And it worked.

Euegene: We have very opinionated customers, and we certainly listen to them. So, when you hear the same consistent message about a dish in the beginning, we don't think that it's our way or the highway. We listen to our guests and we make modifications and you can tell the difference.

Was it immediately booked solid for the first few months?
Eugene: No, like Mark said, it was slow and steady, and we're here for the long haul. This is a marathon not a sprint. We expect to be in this location for the next 20 years, and we are building this brand. Especially with the expansion to Miami, it was crucial that we got everything right. And this was interesting because the word spread and the customer told the customer. It didn't have to come from us being promotional, and it didn't really come from the media. It came from the customers, and it was really interesting to watch customers become our biggest promoters. And that worked out really well for us, because if they really enjoyed it, they wanted to tell people about it and you can't buy that and you can't pay for that.

What was the review process like? A lot of big critics missed this place.
Mark: Most of them didn't check it out. I find that the big-box restaurants in the Meatpacking District are not what they want to review. If we had a 30-seat restaurant in Brooklyn or downtown...maybe the critics are flocking more to that world? For us, we never live or die on reviews. We're happy to get a review when it's positive, and it's disappointing when it's negative.

Eugene: Food critics and the traditional food community have a certain stigma about these big-box restaurants and these Meatpacking restaurants. And we've just decided that we'll focus on the customer, and let the food critics do what they're going to do. But we refuse to live and die by an individual's opinion. It seems that a lot of times when we have a food critic come, they tend to really like the food, but then they'll harp on something that makes it scandalous or negative, and they don't focus on what it's really about — they focus on the actor in the corner. I would love the opportunity for a critic to come in here with a real open mind, without the heavy hand to write what they want to write, because I feel like they have it written before they walk in the restaurant. And that's their prerogative, and fortunately it hasn't affected our business.

Is the menu at Catch Miami going to be the same as the one here? Hung: It's mainly the same, but we're going to tweak a few dishes. Lighten it up a little bit, and we'll use local fish. Grouper, and things like that.

So does it feel like it's been a year?
Eugene: No, it feels like it's been 10 minutes.
Hung: It's still exciting, I'm still doing new things, I get bored very easily.

So what can you tell us about 199 Bowery?
Eugene: Hung has been working on the menu for the past four or five months. I'd say he's really expanded his taste and his style from what our core fundamentals are here at Catch. Again, it's going to be a big menu with a lot of options and a lot of must-haves, done his way. We're excited for it to open in middle or late November.

Will this new project have a nightlife space, like the Catch Roof?
Mark: There will be two new spaces.
Eugene: One is going to have a more high-energy club environment that is going to be called Finale. And then there's the downstairs space, which we have not named yet, and that's going to be more of that rock-and-roll, very dark alternative to your traditional nightclub, with a little bit of live entertainment. Very downtown, very Lower East Side.
· All Coverage of Catch [~ENY~]