Eater co-founder Lockhart Steele lives on Peck Slip in the South Street Seaport neighborhood, the heart of #ZoneA and recipient of Hurricane Sandy's salty welcome. Herewith, the state of the neighborhood eating and drinking scene. 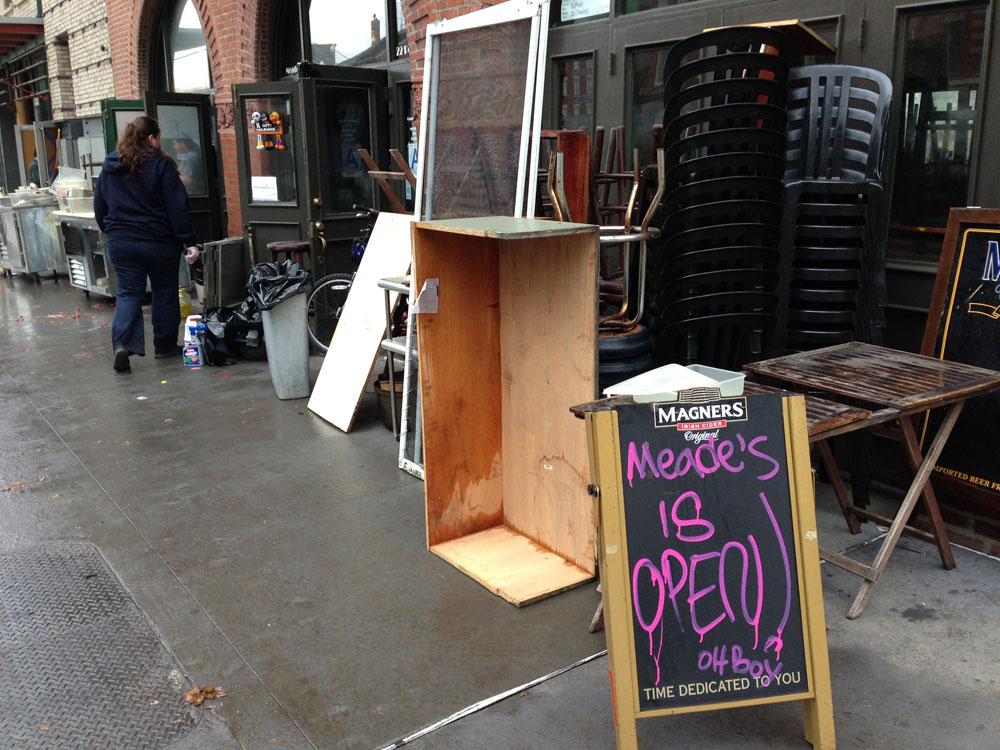 1) The South Street Seaport is blessed with three of the great Manhattan bars: The Paris (aka Paris Cafe), a century-plus old Irish-dive-meets-sports bar at the corner of Peck Slip and South Street; Meade's, a subway car-sized local at Peck Slip and Water Street; and Fresh Salt, a classier but wonderfully understated spot on Beekman Street between South and Front. All three took a direct hit at high tide. But at both Paris and Meade's yesterday afternoon, staff were out in force beginning the cleanup. And on examination through the windows, the damage at Fresh Salt seemed less harsh than expected. These are good omens. 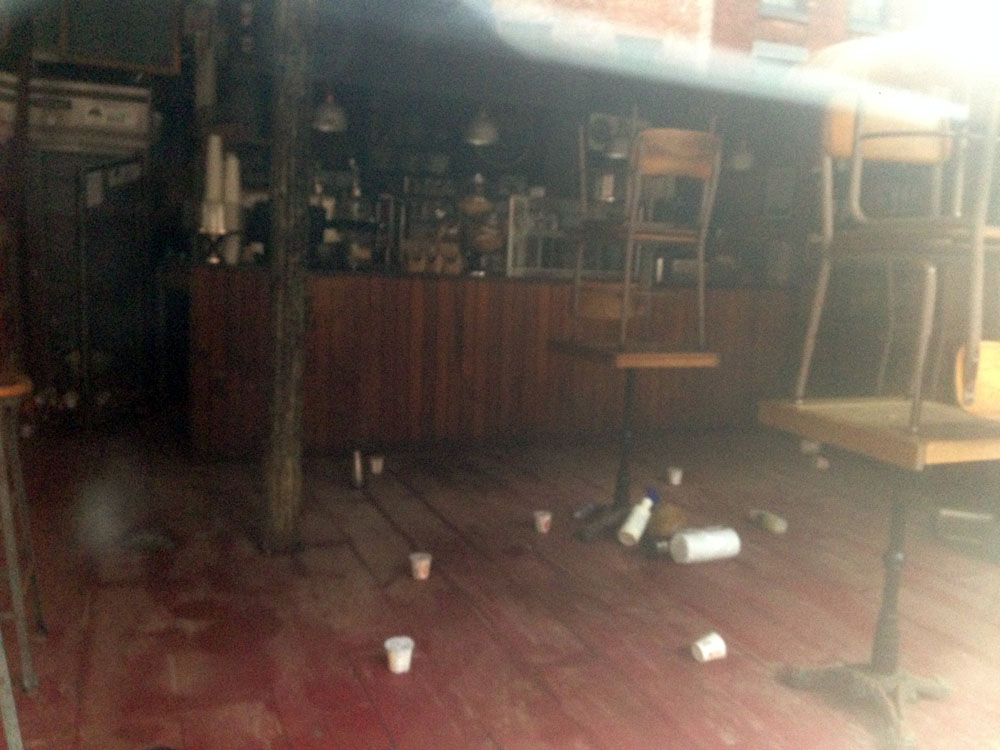 [Jack's Coffee, seemingly ready to reopen when the power comes back on.]

2) Seaport establishments raised above street level—of which there are several, thanks to the quirky Tribecaesque architecture of the streets—fared better. Jack's Coffee on Front Street has its chairs still politely stacked on tables, as if ready to reopen a few minutes from now. A few doors down, the stone-cold classic Jeremy's Ale House took on water of a few feet, but not much more. The excellent Mark Joseph Steakhouse, one block further from the water up on Water Street, seems to have just missed taking on any water at all. Again, good omens. 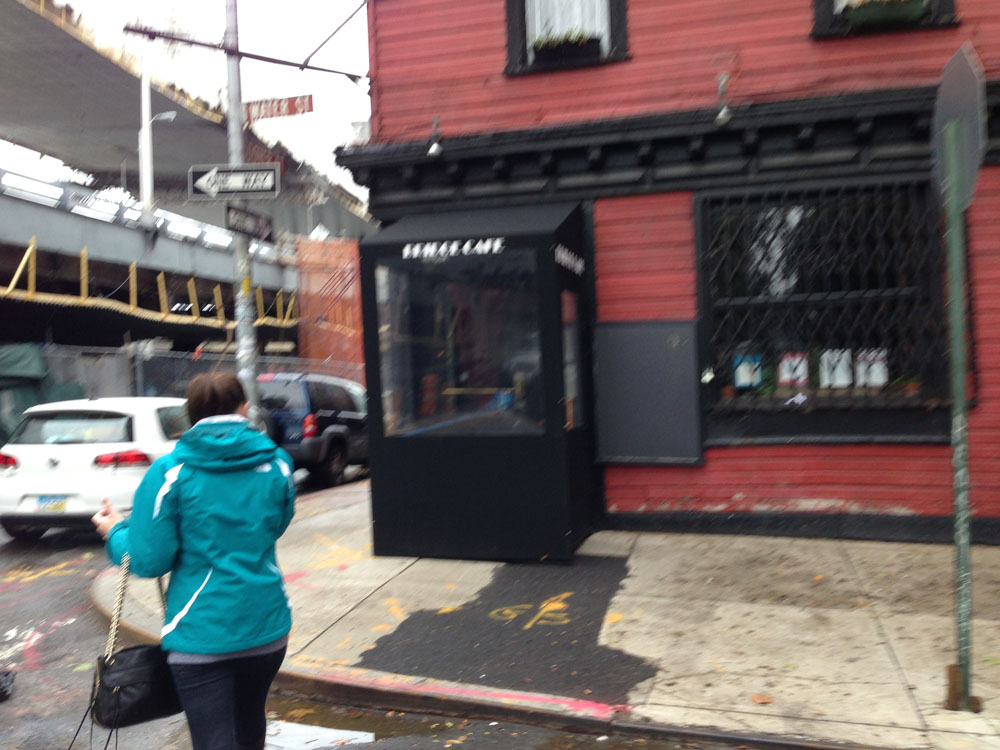 [The Bridge Cafe, 2:16 p.m. Tuesday afternoon, still standing after all these years.]
3) Further up the block from Mark Joseph, The Bridge Cafe—the oldest continually operated restaurant in New York City (dating to 1794) — sat just high enough right next to the Brooklyn Bridge to also avoid catastrophe. The place is unstoppable. 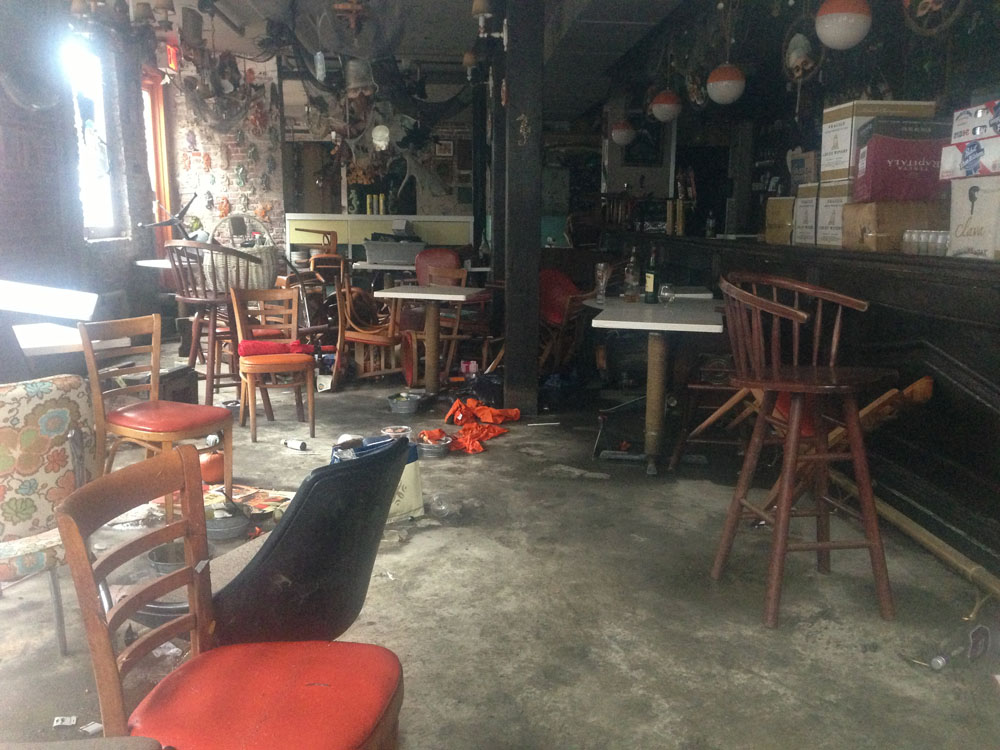 4) A block closer to the water on Dover Street, Cowgirl Seahorse—sister restaurant to the West Village's Cowgirl Hall of Fame—had it a bit worse. Strolling by, we chatted up the owner, who made a trek to the restaurant at 12:30 a.m. Monday night to assess the situation. "Let's get going," she told her team yesterday afternoon, leading a few folks inside to begin the resuscitation. Its shrimp and grits cannot return quickly enough.

5) Closer to Tourist Alley, aka Fulton Street, sits Bridgewaters, one of the city's great event spaces. Perched on the second floor, it avoided the water that swept into so many others in the neighborhood. Owner Matthew Glazier, on the scene at 9:09 a.m. yesterday morning, texted Eater, "It's a little hairy." But the show will go on, almost immediately. Those who know The Glazier Group know that these people are pros.

6) Back on Peck Slip, the very solid Acqua restaurant at the corner of Peck Slip and Water Street definitely felt the hit too. Besides being engulfed by the neverending construction work going on right outside its doors, Acqua also became (poetically, yes) engulfed by the East River. This place deserves patronage as soon as it's back. In the neighborhood, its pizzas are bested only by Front Street's Il Brigante, which plywooded itself up well enough that we couldn't asses the damage yesterday. 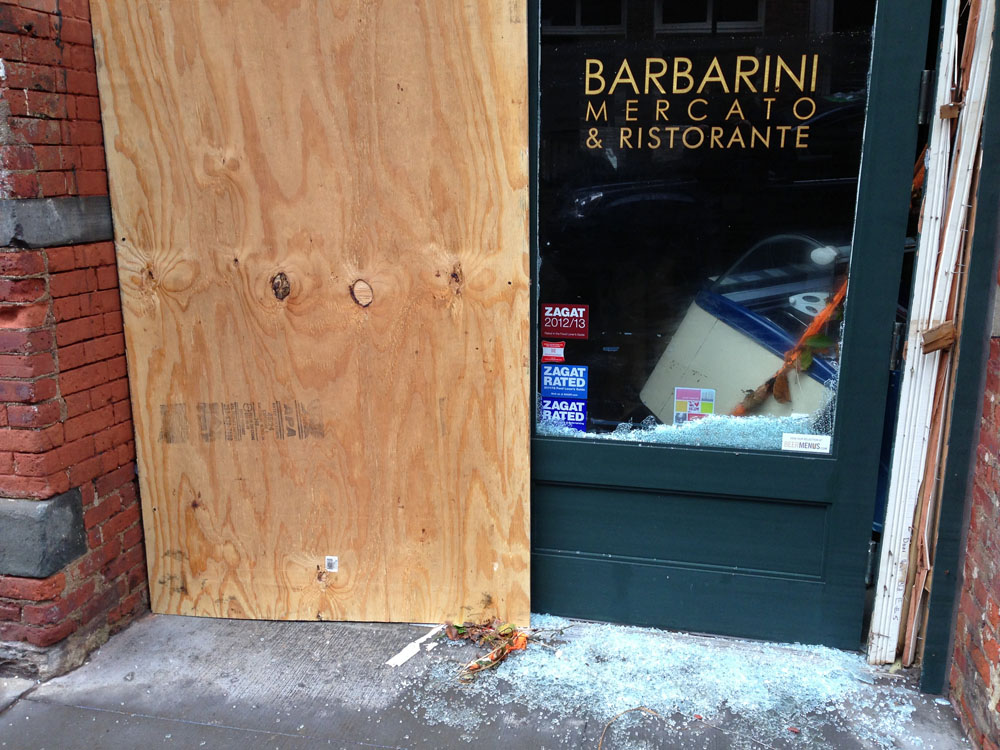 7) We did, however, get a good look into Barbarini Alimentari, a proud member of the Eater 38 and the go-to restaurant for discriminating #seaportliving folk. Just an awful scene of strewn debris and furniture. The restaurant also doubles as an Italian grocery store for the neighborhood, so its importance cannot be overestimated. No timetable here. 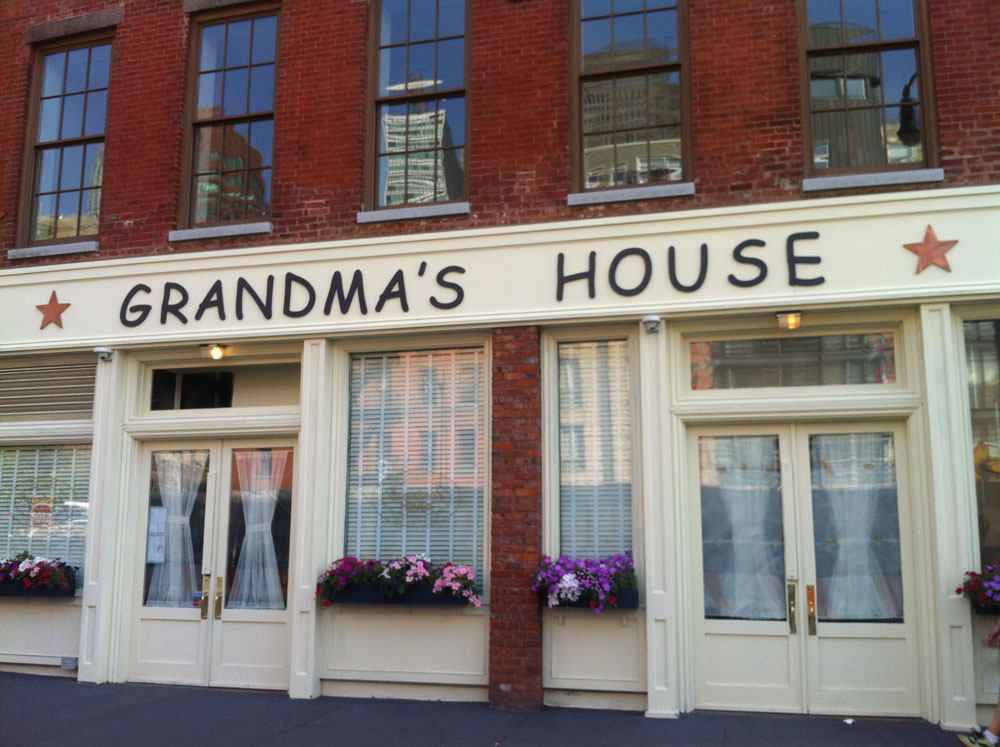 8) A few doors down from Acqua sits Grandma's House, certainly one of the oddest restaurant openings of the year in New York City. Start with the signage, if you must, because on historic Peck Slip, the owners chose the font Comic Sans, then plastered the name above their doors in 5000 pt font size. (It's also worth noting the door handles are a giant knife and fork.) The place never drew a crowd after opening in the spring, and for the past few weeks has been quasi-shuttered. Here's hoping Sandy threw them an economic life preserver and they can take their insurance money and move on. 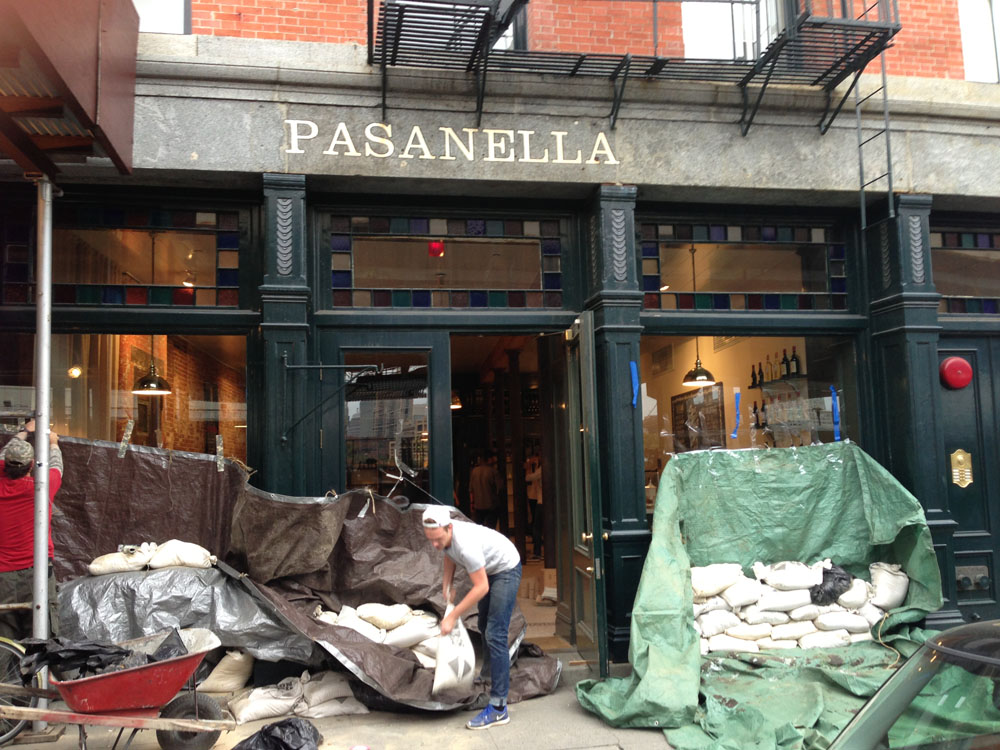 9) It's technically outside our bar and restaurant purview at Eater, but Marco Pasanella's Pasanella and Sons probably got the worst of it all, being as how the wine store sits facing the East River on South Street. We talked to the team, led by its amazing wine director Ryan Ibsen, while packing up the place in advance of the storm. "I'll leave the room for a sec, and you can pretend you're looting," Ibsen told us. Joke's over. Despite epic sandbagging and canvas, the ocean came in. Even though they'd prepared better than anyone (except the New Zealander's bar Nelson Blue), there's also no timetable here on reopening. 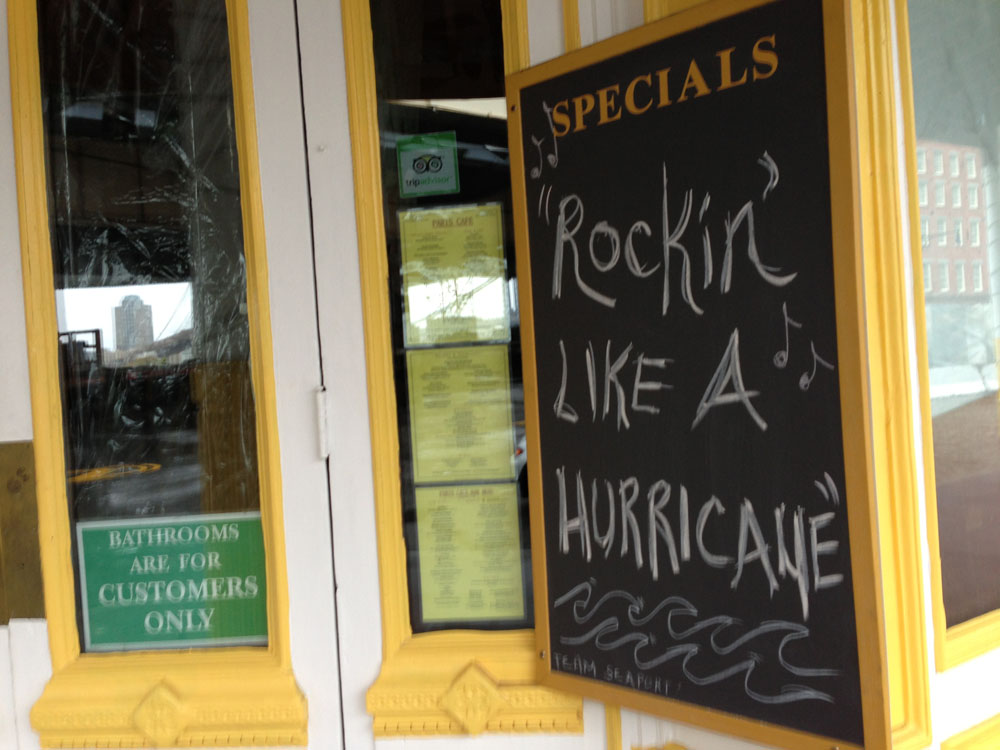