Share All sharing options for: Tien Ho on Struggles, Ownership, and French Cooking

The year Tien Ho spent out of New York City kitchens was not a particularly joyful one for the chef. As he tells it, it was a time of false starts, of trying to but never fully understanding business plans, and of feeling like he "didn't have anything." It was also a year in which he traveled, reconnected with old friends, and perhaps most importantly, figured out that he really didn't have the skill set to open something completely on his own. And so it was recently announced that Ho had teamed up with the restaurateur Gabe Stulman to open up a new project, Montmartre, in Chelsea.

A few days ago, Ho stepped out of Jeffrey's Grocery, where he's been helping out the team and also working on ideas for his own place, to talk about what it's like to be a free agent chef, his ideas for Montmartre, and his memories of cooking at the Momofuku restaurants that put him on the map.

You left Má Pêche over a year ago, and I wanted to start out by asking you what it's like to be a free agent chef.
My God, being a chef without a restaurant for the last year has felt like a lifetime. It's a double-edged sword: for us, for me, working so hard and so long and then not having a restaurant to go to...

Is kind of saddening?
Yes, it's actually really depressing. It was incredibly depressing. It sounds great to wake up and not have anything to do for once, but after a few weeks, that gets tough. I can tell you clearly that I was really depressed for a while, because I felt like I didn't have anything. Well, I didn't have anything. That's why I did some traveling. "Maybe I'll go to California," I said. I had never been to L.A., for instance. I loved it. A year ago, in October, I went to Napa to see my friend Cory Lane.

Who was working with Tyler Florence after leaving Momofuku?
Yes, he was with Tyler Florence and then he left. I went out there to the harvest last year. I'm very, very fortunate to be friends with Annie Favia and Andy Erickson, who are some of the most famous winemakers out there. I went out there with the intention of working the harvest, but they wouldn't let me work at all, basically [laughs]. They'd just let me drink and eat. It ended up being three weeks. Last year's harvest was also super late last year. Then, after that, I did a pop-up in L.A. and ended up really liking that city.

Then, I spent all of January in Vietnam, which was a trip I had been planning for years and years.

When I got back, I really wanted to get things going again. I was in conversations with lots of different people around the same time, and there were lots of different things going on. I wanted to do it all on my own. I had the space, the architect, the concept, and everything else in line. Except for the money. In the end, I couldn't secure the financials, which was incredibly frustrating. That's when I started to talk to Gabe [Stulman] again.

When did you first meet him?
We had first started talking about a year ago. A mutual friend told us that we should get coffee, and we hit it off. We'd meet up occasionally and finally, I told him three months ago that I really wanted to do it, that I had an idea in mind, and that we should partner up. He got back to me pretty quickly with news that we had the space and financials. I had been stagnant for so long, so it's really nice to be in a state now where it's, "We gotta go, we gotta go!" 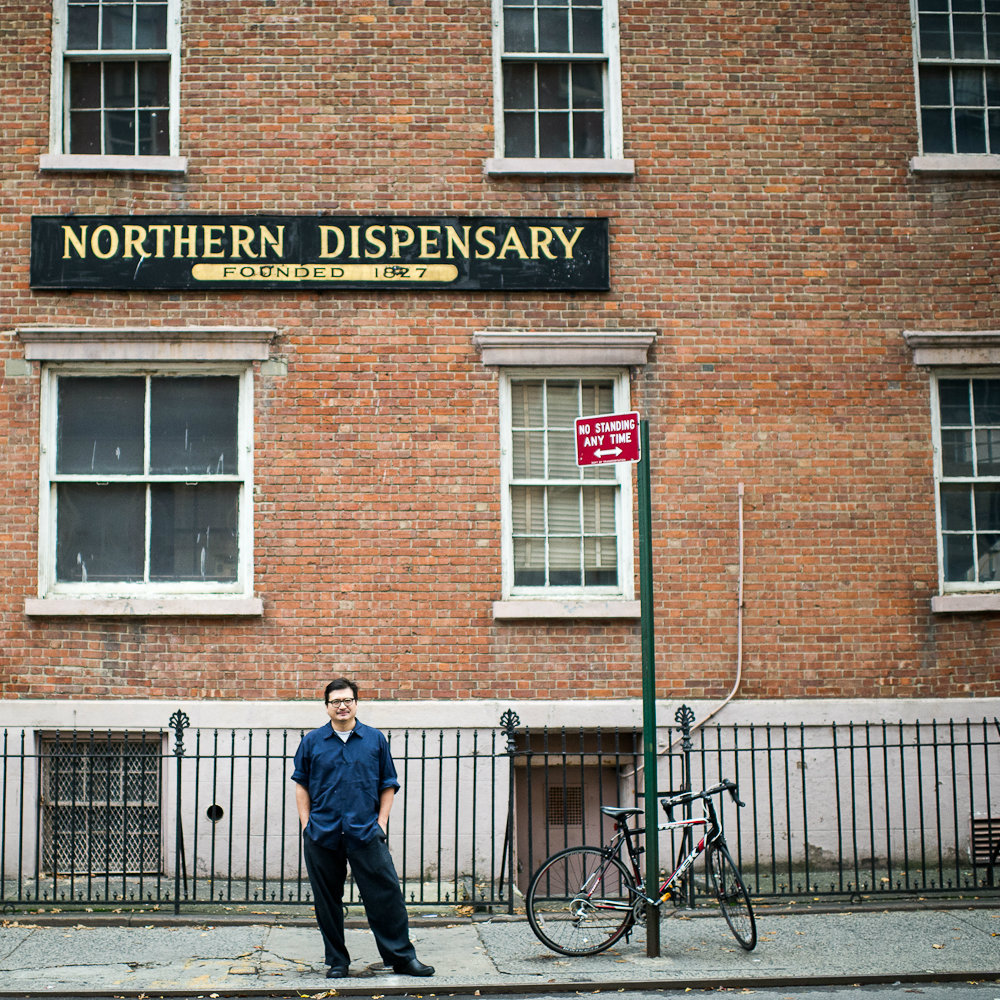 What idea do you have for the restaurant? What kind of cooking do you want to do?
Well, I think that a lot of people expect me to do an Asian thing again, or in general. But I wanted to go back to what I first learned how to do, which is classic French cuisine. I apprenticed under a Belgian master chef who was super old-school.

Where was this?
It was called The Belgian Restaurant in Austin, Texas. That was my first cooking gig. I had just graduated from college and didn't know what I wanted to do. I applied to the CIA and was actually denied, because back then, you needed to have six months of professional experience before they accepted you. My friend, who had been a cook at a titty bar, got in, by the way.

By pure luck, I got the Belgian job. It was mom and pop, but also upscale for the time. The chef-owner, about a month into it, stepped out of the kitchen to run the front of house and brought in a master chef from Belgium. He was The Guy. To make a very long story short, I apprenticed under him for close to two years. It was super old-school, and that's what I still love the most.

But it doesn't sound like this project with Stulman will be formal French...
Definitely not formal. At the same time, though, I don't want to say that it's going to be super classic or super traditional. No matter what you do now, in New York, you have to put your own spin on it, though. The Vietnamese flavors may pop up, because I am Vietnamese, but it's not going to be the focus. I envision it as a fun, delicious, and approachable place.

Did you have this concept in mind from the start?
From the beginning. Right when I first wrote my business plan, it had a more Asian feel. The more I thought about it, it was clear that the direction should be more a casual, fun bistro.

What are some dishes you have in mind?
There are definitely lots in mind. Imagine all of your classic bistro dishes, just reinterpreted. For instance, I would take the cassoulet and make it lighter. Every time I've eaten a cassoulet, it destroys me. But I'm not smart or clever enough to do deconstruction or anything like that, either.

It looks like French cooking is coming back, as stupid as it sounds to even have to say that.
I remember about four or five years ago someone made the bold statement that French cooking was dead. Holy shit. At the time, the Spanish and the modernist cuisine were really coming up. They would say that the French chefs lacked innovation, but I have personally seen some great French cooking in the last decade. I can tell you that one of the most brilliant meals of my entire life was about four years ago at Les Ambassadeurs at Hotel Crillon.

When Jean-François Piège was still there?
Holy fuck. I still remember every moment of that meal. I just got his book, and the first thing I saw was the new version of the blanc manger. The recipe was in French, so I was having a bit of trouble with it, but I could tell that it was incredibly hard to make. So when someone tells me that French cuisine is dead, I just want to tell them to go fuck themselves. Not only is that shit brilliant, it's delicious. It's so good.

Seems like you maybe want to emulate that without the fancy setting?
Yes, exactly. Honestly, I'd love to do that kind of cuisine, but I don't know if I'm smart enough to execute that consistently.

What can you say about the space, its size, and the projected opening date?
What I can tell you is that it's in Chelsea. We're saying winter, but you know how things can change. And it's definitely not a big space. Gabe is brilliant and is very good at turnover spaces quickly, but we really don't have an exact opening date in mind.

Do you have total freedom with the menu?
Oh, yeah. Menu-wise, I'll ask for Gabe's advice, but I think that we will have a lot of liberty to create food that we all love.

You were telling me on the walk over here that you would spend your days in the public library struggling to learn how to do business plans because you wanted to do something solo so badly. Do you have any fears or hesitations going into this with a partner again?
Obviously, anybody that is smart enough in this business knows that they have to take into consideration different factors. As much as I wanted to do it on my own in the beginning, I realize now that I really don't. It's a completely different skill set. The first time I read a business plan, I didn't understand half the shit that was in there. I'm just not good at that stuff. What I am good at is cooking and running a kitchen. Well, that's even debatable!

Having gone through this process up until now, I've realized that you have to take a leap of faith and trust someone. It's not always the easiest, but at least in this case, I think it's the best way to go for me.

Do you have any regrets about leaving Momofuku? Is there any sadness there? You were at Ssam at a time many people would call its glory days.
Oh, no. The first thing I would say is that I was not the one who made that happen. There were so many different people: David, Corey, the cooks, the dishwashers, the busboys, the expediters. All those people made Ssam Bar what it was and what it is. I was pretty lucky. It wasn't always an easy process, but I can't imagine being where I am without that. I'm excited for the next phase.

Do you feel you have more ownership now? I don't mean "ownership" necessarily in the financial sense.
Yes. But also, it was time for something different, to put it simply. The word "ownership" is funny, as you suggest: is it spiritual, financial, something else? There's also a lot of ego involved.

You'd admit that?
Of course. More than anything, though, the ownership aspect applies to doing something different and something for myself in a way that I didn't have before. It wasn't about a bigger percentage.