Leo Robitschek of Eleven Madison Park and The Nomad

Share All sharing options for: Leo Robitschek of Eleven Madison Park and The Nomad 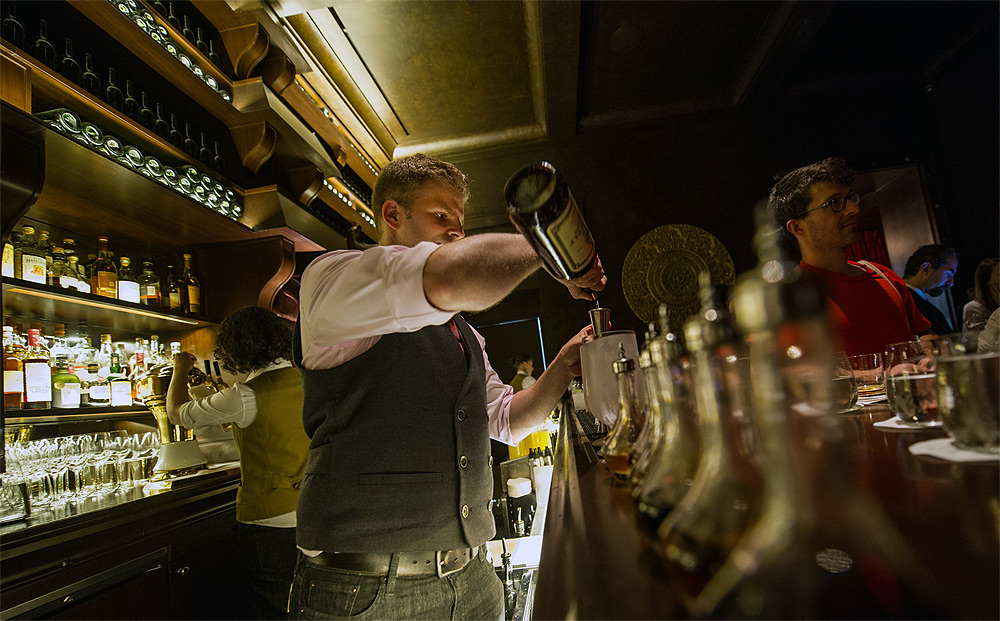 Leo Robitschek is the the guy behind the bar programs at both Eleven Madison Park and The NoMad. At EMP he took a basic cocktail program and transformed it into what is arguably the best cocktail program at any four-star restaurant in NYC. At The NoMad he took the EMP formula, made it even more ambitious, and then installed it in a bar and restaurant that does exponentially more volume. Somehow, it's working very, very well. In this interview he talks about how the bar at EMP works with the kitchen, where he sees cocktails fitting into fine dining in the future, why NoMad's cocktail program is unique, and what he drinks when he's not saving the world from bad cocktails.

Since joining the team at EMP, how has your philosophy on cocktails or your interests in terms of technique and ingredients changed – particularly post revamp?
Basically six years ago, or I guess longer now, it was a bar that had the same cocktail list for six or seven years. They were using fresh juices, but that was pretty much the extent of it. And I remember, very specifically, Will coming up to me and saying, "Hey, I want this to be one of the best cocktail bars in the world; I want it to be like Milk & Honey or Pegu Club." And I sort of looked at him, chuckled, and was like, "alright," thinking that, with what I had, it would pretty much be impossible.

There are a lot of people who'd say that you achieved the impossible. So, how did you do it?
We started small and we began with list of eight classic cocktails, but more obscure classics, and then we started working with pastry to make things like grenadine and orgeat that were essential to these classics. Once the whole bar team was proficient in these drinks we started being more creative and focusing on our own cocktails. The biggest part of creating a new cocktail list in a place that already exists, and has an existing staff, is getting everyone up to speed. So, for me, if we are going to showcase something on the list, I wanted it to be something that every person could execute perfectly every single time. If you walk into a place and you ask for a Manhattan and you get four different Manhattans, that's a big issue for me.

How has the cocktail list evolved from those beginning stages of the revamp to where is it today?
So now the cocktail list changes four times a year to reflect fresh, local ingredients, but also ingredients that evoke the memories and feelings of that season. And the list, which began with eight classics, has slowly grown to 15 cocktails and only one or two are classics; the rest are proprietary drinks.

At a restaurant, the luxury that you have that a cocktail bar doesn't, is the kitchen; and at EMP it's a very sophisticated kitchen. How has working with the kitchen influenced your cocktails?
I get accessibility to a variety of some of the most amazing produce. Most bars can't because they don't work with the same purveyors as we do, or it's just not cost effective; a lot of this stuff has a short shelf life. There are also things like, having the availability of a stove, or a Cryovac machine, or nitrous oxide canisters for infusions. But the biggest thing is access to some of the best palates and technicians in the industry. A lot of people don't realize that a pastry department has pretty much everything a bar could ever hope for if it wants to make balanced and stable things like ginger beer and syrups and infusions. Realistically, the bar at EMP does its own prep, but there are things the kitchen does create for us. And even the things we do create on our own we have their palate and their enthusiasm. So there's a lot of collaboration.

EMP has really led the way in elevating the cocktail and making it part of the four-star dining experience, at least in NYC; others have gently followed suit. How, specifically, do you think EMP has changed the role of the cocktail in fine dining?
I think we were the first fine dining restaurant to really showcase cocktails in NYC. When we started to revamp the program, the other fine dining establishments had either small or non-existent cocktail programs. Four-star restaurants and cocktails were not synonymous. I am so lucky to work with Will and Daniel, who are young, creative, and ambitious. And Daniel is one of the few chefs I have met that really understands that the dining room side of things is as important as the kitchen side of things. And that they work like a yin and yang. So the idea was, if we serve some of the best food in the world, and some of the best wine in the world, why not serve the best coffee in the world, the best tea in the world, and the best cocktails in the world? It just didn't make sense that you would have that handicap. And I think it's amazing that you see Daniel and Le Bernardin following suit and really trying to up their cocktail programs. I think they realize that people want to drink better.

Restaurants, in a sense, have a greater opportunity—in terms of access to a kitchen and ingredients—to be creative than a cocktail bar might. So, what do you think the trend is for the future for cocktails as part of the restaurant experience?
I think everyone who is coming up or has been around knows that they need to do things in order to change. And it's not about being competitive; it's about giving your guests what they want. My philosophy is that the rising tide lifts all boats and I hope that one day I can walk into any restaurant and have an amazing cocktail, because I like to drink and I think you should be able to get a classic cocktail, served perfectly, no matter where you go. I think that's the trend we're going to see. Now you even have Friday's and Applebee's attempting to create classic cocktail menus, and that's awesome.

What do you think started all of this game elevation?
I think wine started everything off. I think people started drinking better wine and I think Americans started asking for better food and more farm to table, local, better quality ingredients. It's the same with cocktails. I think the internet has also helped a lot. You can be anywhere and go online to Eater and learn about restaurants and the places that are making great drinks, or you can go online and learn how to make a cocktail. I think that's pretty awesome.

Has molecular gastronomy – the work of guys like Ferran Adrià and Grant Achatz – influenced your work with cocktails as of late?
In a way, yes. But I am not, by any means, a "molecular mixologist." I think there are elements of it, like in chef's food, that could benefit a cocktail, so we'll use nitrous oxide, but not for every infusion. With some you are able to rapidly infuse and control that infusion so that you don't get the bitter flavors that you get via an infusion with a maceration process. You see chef using elements of molecular gastronomy in the dishes, but by no means is he a Wylie or a Ferran, and same thing with the cocktails.

Let's talk about beginning stages of The NoMad. What did you originally envision for the bar program here?
So I've always been enamored with 19th-century New York, when the hotels were the epicenter of society. People would go and eat and drink and have fun. And these grandiose hotel bars were the leaders of the cocktail world. But unfortunately, many of those bars that still exist are not leaders anymore. So I've always been interested in being involved in a hotel project that could bring back old-school New York, old-school luxury, and the classic old-school cocktails that were really the birth of the movement. I think what we were doing, and are doing, at EMP, is very much in line with what hotel bars were doing at the turn of the century, and I knew I wanted to do that, but in a more appropriate setting—more like the setting it was birthed in, and I wanted it to be bigger.

How is The NoMad unique in the cocktail scene?
Very few people have a cocktail list as ambitious as we do. We have around 30-35 cocktails on the list, depending on season, and the only other places in the city, that I know of, that have cocktail lists that large are places like Death & Co., which is a far more controlled environment. So, I think the volume that we are doing, with the list we are doing it with, is unique. We also have an amazing wine program, an amazing beer list, an amazing coffee program, and amazing food. I don't know anywhere else, besides EMP, where you can get all of those things in one place.

What's your favorite base spirit, liqueur, ingredient, etc. of the moment?
Sherry. I love it as a base of a cocktail or a secondary ingredient in a cocktail. And I like to use wine in cocktails in general. So, anything grape based.

What are your favorite cocktail bars in NYC?
I would definitely say Death & Co. I also really love Joaquin [Simó]'s new place, Pouring Ribbons. I think the level of hospitality there is awesome. One of the first things I tell my bartenders is that you're serving people, not cocktails. So it's nice to go to a place where, when you walk in, they look up and smile; they're not just looking down and making cocktails. I also love The Beagle.

What's your shift drink?
I'm a "When in Rome" type of person. I drink tons of wine, tons of beer, tons of spirits. I am the least picky drinker ever. If I am at a dive bar, I'll have a beer and a whiskey. If I am at a nightclub, I'll drink gin on the rocks. And if I am at a cocktail bar, I'll drink cocktails off the list.

What's the best time to snag a seat at the NoMad bar?
Well I think the NoMad bar is one of the great, undiscovered lunch spots. People don't realize they can come in and eat at the bar. Beyond that, Sundays are good. They tend to be industry/neighborhood nights and people tend to eat at the bar and it's fun and not too crazy. On any other night, anytime between 4:00 - 4:30p.m. [Laughs]