Prime Meats is the Jewel in the Franks' Wine Crown

Share All sharing options for: Prime Meats is the Jewel in the Franks' Wine Crown 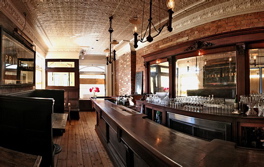 The back room of Prime Meats, with its stretched ceilings and windows draped in white gauze, feels like a Revolutionary-era hangout fit for discussions about things like, you know, freedom.

Instead it's filled with guys who just look like revolutionaries, talking about the new iPhone. But it's no less beautiful for it.

It's the sort of room that can swallow you for an evening; it begs for a second bottle of wine. And what feels so wrong the next day, feels very right at the time. Be advised. And start with some Mosel riesling; it's lower in alcohol.

The wine list is compact at just over 100 selections, but it's still the sort that you'll want to linger over. It covers a range of wines from all over the globe, embracing the sort of randomness you'd expect from someone's personal wine collection. And it works. The Old World owns most of the real estate, allowing Burgundy to be the star of the reds, while Austria and Germany own the whites. But a detour from these two obvious choices with the food, which is Germanic, will reap rewards.

There are several values in Bordeaux under $75 and a soupçon of American wines that offer value from new guard producers like LIOCO and Scribe to classics from the likes of Cathy Corison. Most everything here is priced just below standard, with a few options like a $58 liter of 1996 Schloss Schönborn, Riesling Hoccheim Daubhaus Spatlese that are practically praying to be drunk.

It all comes courtesy of Maximillian Quattrone, who started his career as a sommelier at Del Posto before graduating to floor manager and eventually moving on to open Prime Meats with the Franks. He is now in charge of the wine lists for the Franks' entire brood. And while the lists at both of the Frankies restaurants manage to pack plenty of charm, Prime Meats remains the real jewel in the crown.

Bang for the Buck
Riesling - Karthäuserhofberg, Riesling Spätlese '02 $64
This star producer from the Ruwer always offers tremendous value. The 2002 rieslings seem to be showing well right now, even though this no doubt has years to go. Expect a some sweetness, but not without the trademark pungency that Mosel-Saar-Ruwer acidity offers.

Ribolla Gialla, Verduzzo, Picolit - Ronchi di Cialla, "Ciallabianco" '07 $55
Ronchi di Cialla's flagship "Super Friulian" blend of ribolla gialla, verduzzo, and picolit is one of the Colli Orientali's benchmarks. The wine is aged in neutral barrel and generally starts to show its best after some time in bottle. This has miles to go, but drinks well now. A mineral, savory wine with the structure to stand up to sausage.

Riesling - Weingut Stadt Krems, Grillenparz '06 $47
The 2006 vintage was a tough one for Germany and Austria, but it's also a vintage that can offer value and drinkability. This one probably doesn't have much more in the tank, but is a solid choice for mature riesling under $50.

Pineau d'Aunis - Domaine de Montrieux, Coteaux du Vendomois '10 $45
Pineau d'Aunis is one of the oldest grapes in production today and this version is sourced from rare pre-phylloxera vines dating back to 1870. Montrieux's take on the grape is generally denser than your average pineau d'aunis, but '10 has kept things lean. Light, peppery, earthy.

Pinot Noir - Lignier Michelot, Bourgogne Rouge '10 $60
Great, classic producer out of Morey St. Denis. This is pretty much everything one can hope for from Bourgogne Rouge: pretty, spicy, and earthy with plenty of fruit. Great, versatile choice for the food that drinks beyond its price point.

Gamay - Fernand Coudert et Fils, Fleurie, Clos de la Roilette '10 $48
Roilette's wines are always among the most dense and deeply aromatic wines out of Fleurie. The wines are structured to age for a decade or more in bottle and can be a bit shy in youth. This could use a bit of a decant, but has all of the dark fruit and grit that much of this menu begs for.

Off the Beaten Path
Portuguieser - Schloss Mühlenhof, Portugieser Trocken '08 $34
In Germany, portugieser is a grape primarily found in the Pfalz and Rheinhessen, regions that are both capable of making great riesling, but are warm enough to make fruity reds. Portugeiser is on the lighter side of the spectrum, but is low in acidity. Easy drinking stuff that's great with a chill.

Under $40
Neuberger - Stadlmann, Mitterweise '07 $34
Thermenregion, located just south of Vienna, is always playing second fiddle to the big name regions north of the city. But it's a hotbed quirky grapes like neuberger, a cross sylvaner and roter vetliner, which probably doesn't help much. This grape is easy to like and Stadlmann usually shows its herbal side. A few extra years in bottle makes this an interesting buy.

Break The Bank
Chardonnay, Pinot Meunier - Egly Ouriet, "Les Vignes de Virny", Brut 'NV $110
Champagne made solely from pinot meunier is quite rare. Typically the grape is the third, in terms of percentage, behind either chardonnay or pinot noir in any given three-grape blend. Here, however, grower-producer Egly-Ouriet bottles the oft-dismissed grape on its own and gives a fascinating look at the variety. Great pricing to boot.

Tempranillo, Garnacha - López de Heredia - "Tondonia" Reserva '01 1.5L $230
This is a very fair price on a wine that's worth splurging on if you have a big group. Classic, traditional rioja from one of the greats in a great vintage. These wines continue to become more in demand (and expensive), so it's worth digging in while you can.

WTF?
Cabernet Sauvignon - Amapola Creek '06 Sonoma Valley, California $60
This is a prime example of what happens when cabernet gets too ripe. Amapola routinely clocks in the mid 15 percent alcohol range, with a slather of new wood on top of that. If that's your steez, go for it, but for those not looking for something powerful enough to clobber pretty much anything in its path—beware.
· All Wine Coverage on Eater [~ENY~]
[Krieger]