Share All sharing options for: Handsome Goofball Scott Disick Backs Out of Ryu

It's been a rocky past few months for Ryu, the Meatpacking District Japanese restaurant from Fatty Crew's Jesse Camac and professional Kardashian beau Scott Disick. After getting slammed by the critics, the restaurant popped up on deal sites, and the owners launched a take-out window serving waffle fries and cheesesteaks. Also, the management just swapped two-tops for farm tables, which is never a good idea.

Now the Post reports that Disick has jumped ship. 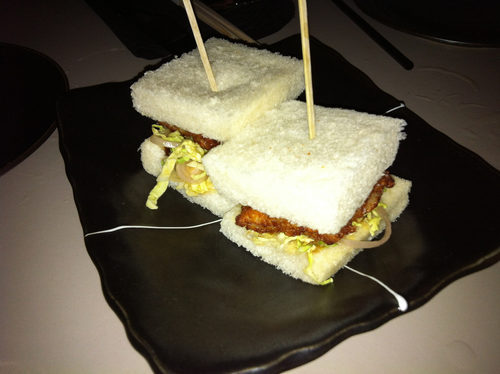 [The offending sliders]
The reality TV star's rep tells the paper, "He got out of the restaurant months ago. He has a bunch of other projects. He thought he would be in New York more but is spending more time in Miami." Disick appeared at a promotional event for the restaurant in September, so it seems unlikely that he actually bailed on the project "months ago." The management denies the rumor that the place is being sold, noting that, "Things are great." Hopefully, Disick took the slider recipe with him on the way to Miami.
· Scott Disick Dumps own Eatery [NYP]
· All Coverage of Ryu [~ENY~]