Solid Pies, Plenty of Locals at John's of Bleecker Street

Share All sharing options for: Solid Pies, Plenty of Locals at John's of Bleecker Street

This is the latest edition of Who Goes There? a regular feature in which Lost City's Brooks of Sheffield cracks the doors on mysteriously enduring Gotham restaurants—unsung, curious neighborhood mainstays with the dusty, forgotten, determined look—to learn secrets of longevity and find out, whogoes there. 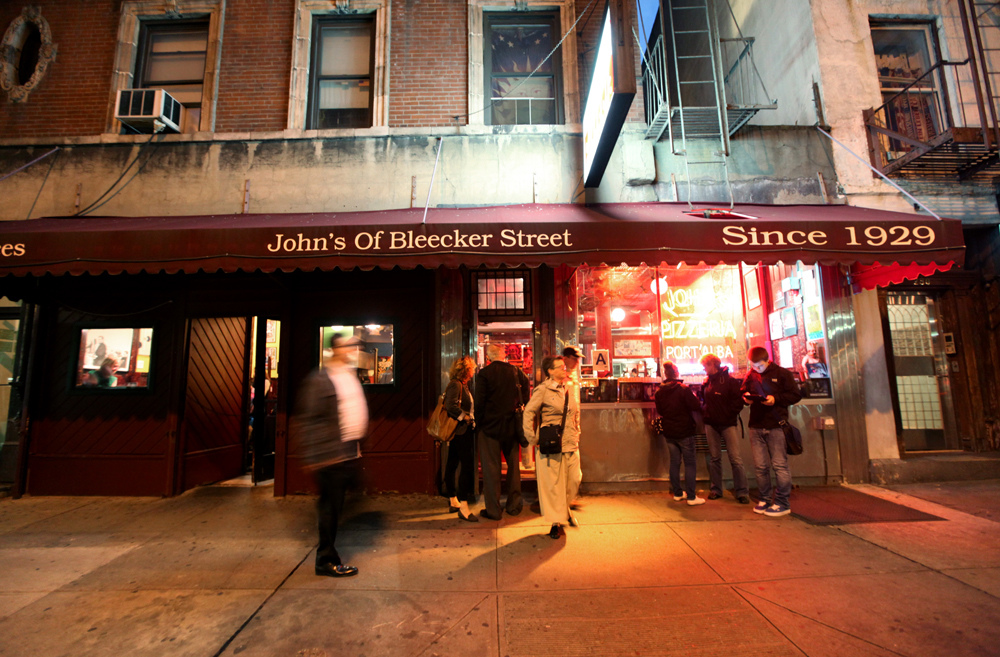 John's Pizzeria doesn't get the respect accorded to other old New York pizza institutions, like Patsy's, Totonno's, or Di Fara. Nor does it get its due as a Greenwich Village icon the way places like the White Horse Tavern, Village Vanguard, or Cafe Reggio do. This, I imagine, is because it's a tourist magnet and perpetually filled to the gills with regular (i.e., uncool) people.

But, for me, John's holds up. The plain pie is not the city's crowing achievement of the pizzaiola's art. But it's good enough to be a standard bearer. The tang of its sauce and the char of the crust are remarkably consistent; the coal-fired brick ovens are still doing their job. I've never had an unsatisfying pie there. And, unlike Lombardi's—another landmark in New York pizza history, but one that is now a theme-park shell of what it once was—John's has retained its character. The main room—with its high, red tin ceilings, twitching ceiling fans, vintage concert posters, and battered wooden booths etched with the names of decades of whittling patrons—is simply one of the greatest, New Yorkiest spaces in the city. One can imagine the Italian denizens of Bleecker Street eating here in the 1930s and '40s; the jazzmen and beatniks of the '50s; the folkies and flower children of the '60s. History lives here.

Despite its reputation as a fave of the weekend bridge-and-tunnel tribe, John's still gets plenty of locals. It also attracts a lot of families, because no one blinks at kids being kids here. I recently dined here with eight tweens, and they couldn't have felt more at home. They inhaled the slices and happily poured themselves glass after glass of Coke from plastic pitchers. They also found the ancient bathrooms an infinite source of fascination.

John's was founded in 1929 by John Sasso, who reportedly learned his trade at Lombardi's (as did the founders of Totonno's and Patsy's). The original pizzeria was on Sullivan Street. When Sasso lost his lease, he dismantled the brick oven and moved it to the present location on Bleecker. There it has stayed. Sasso sold the pizzeria to his brother in 1955. It was eventually taken over, in 1973, by Sasso's great-grandnephews, Peter Castellotti and Robert Vittoria. It's still run by Peter (who was born in a building directly across the street from the restaurant) and his children, Peter Jr. and Lisa. During the Castellotti reign, John's began to expand. There are now three other restaurants, including a massive one in a former church space in Times Square. The latter is always swamped, with 45 minutes waits, because it's one of the only affordable eating options in the Theatre District. The pizza, however, doesn't match what's served up on Bleecker Street. You can't duplicate the effects of an 83-year-old oven.
—Brooks of Sheffield