CB3 Feels 'Duped' By Proletariat, Thumbs Up for Yardbird

Share All sharing options for: CB3 Feels 'Duped' By Proletariat, Thumbs Up for Yardbird 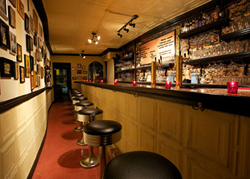 Proletariat, the bar that expanded into the Jane's Sweet Buns space, did not have an easy time at last night's Community Board 3 meeting. The team from the bar went before the board to discuss their alteration application for the extension of the bar. The board said they felt "duped" for approving the bakery-wine bar last November. In June, the establishment switched over to a bar and lengthened its 8-foot bar to 32 feet without notifying the community board. "You used an innocent group of women as a Trojan horse to get a license in a saturated area," board member David Conn said. Bookkeeper Shaun McNatt remarked that they changed over the business when the bakery failed. They now serve bar snack foods, beer, and sandwiches. The address currently has a tavern wine license for the trade name "Proletariat," but the shop's future is uncertain after the its license expires on Dec. 31.

The board marginally approved a full liquor license for 106 on the LES, a Latin restaurant in the former 106 Rivington space, with a 6-4 vote for a 12 a.m. close five days a week. The owners, Jose Rodriguez and Robert Payne, who own bodegas in the neighborhood, initially proposed a 4 a.m. close seven nights a week in the resolution area, a block considered already over-saturated by fully licensed bars. Over 37 people came to the meeting with signs in support of the restaurant. The LES Dwellers Association expressed skepticism of the project's "substantial community support," citing signatures like Derek Jeter and Michael Jordan on the petition and many addresses from other neighborhoods. Given that Rodriguez is involved in their community and there are few Latin restaurants in the 25 percent Latino community, eventually the 118-seat, multilevel restaurant was approved for exhibiting potential for public benefit and promise as a unique venue.

Comfort food restaurant Apartment 13 was denied a full liquor license 9-1 because of limited support, oversaturation in the area, and a negative history at the space (the former tenant was The Porch). Paul Seres, former president of the New York Nightlife Association and The DL partner, and chef John Keller proposed a bi-level restaurant with an oyster bar on the ground floor and a dining room and bar on the second level. Seres' partner Alexandra Drozd, owner of bars like The Delancey and The DL, was criticized for her involvement with noisy rooftop decks. Though Seres said he wanted to change the direction of his career and open a strong dining establishments, the board deemed the 30 table restaurant a poor fit for the resolution area.

Other highlights: Yardbird, a new wine bar, was approved 8-2 for wine and beer license with a midnight close seven days a week in a resolution area, the former Life Cafe space. The owner, an employee of New Amsterdam Market, hoped for a later close at 2 a.m., but the board followed precedent, citing Ninth Street Espresso as a recent tenant to add wine and beer offerings to the area. The owner hopes the place will be a "quiet alternative" to the usual bar scene. Yardbird will serve regional sourced cheeses, charcuterie, and canned lobster.

One More Thai, a Southeast Asian restaurant slated for the 6 Clinton St. space, was approved 7-3 for a wine and beer license with a 11 p.m. close seven days a week. The 35-seat, full service restaurant was approved for the resolution area without much debate.
— Ashley Mason
NOTE: An earlier version of this post stated that the Proletariat team was seeking a liquor license change. They were actually at the meeting to discuss the alteration to the space.
· All Coverage of First Word [-ENY-]