Share All sharing options for: This Month in New York City Dining, 1982

Occasionally, we like to look back on other periods of New York dining. Here now is a rundown of what was abuzz in the city 30 years ago: January of 1988. 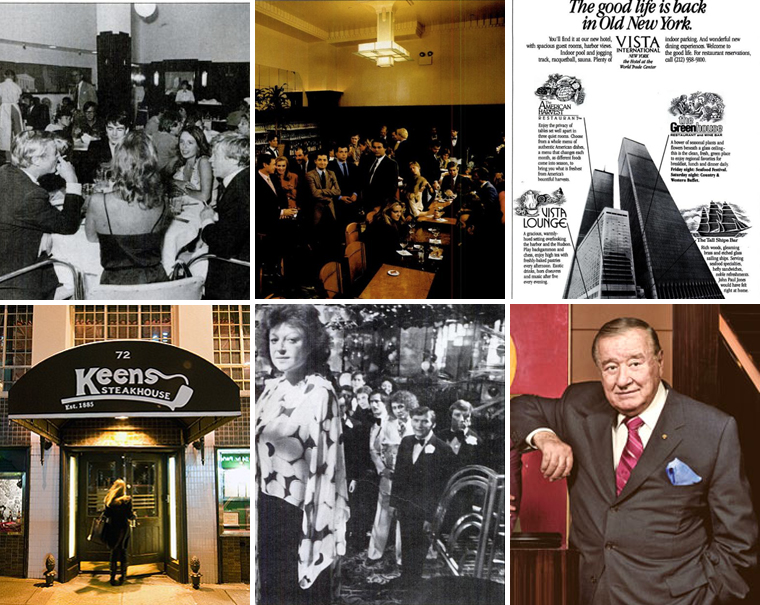 [The Odeon, La Coupole, dining options at The Vista at The World Trade Center, Sirio Maccioni, Regine's, Keens]
News of the Month: Free Water, Fresh Meat, and French Imports
This month in 1982, Mayor Koch announced that the city-wide drought emergency had been downgraded to a "warning," and that restaurants could finally start serving water again to their customers without asking. Towards the end of the month, a branch of famed Parisian cafe Le Coupole opened at 2 Park Avenue. Soon-to-be-star designer Adam Tihany attempted to recreate the original dining room by importing light fixtures, flatware, and glassware. In a bold act of restaurant design, Tihany also paved the floor with over 350,000 bits of broken tile. 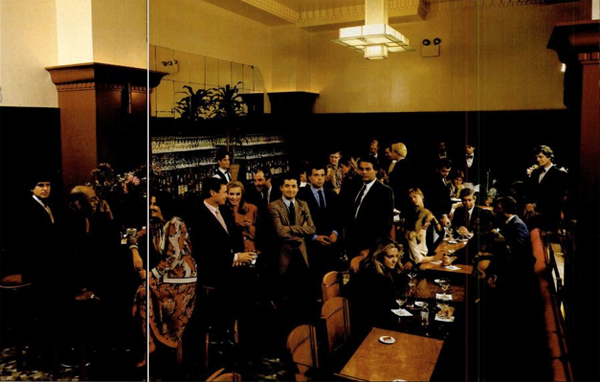 [The opening crew at La Coupole]

In February, an architecture critic wrote that, "the interior is a close enough copy of the original to give even a one-time visitor to the Paris restaurant a bit of a jolt." Although the room drew raves, the restaurant received a drubbing from the critics (Mimi Sheraton gave it a zero-star "Poor" rating), and the owners filed for bankruptcy two years after opening. The space would become home to An American Place, and Terrance Brennan's Artisanal after that.

Elsewhere in the dining world, Sirio Maccioni was tapped to help find a new chef for Blair House, the White House's official guest quarters. His recommendation was a young Parisian named Antoine Bouterin who had just taken a position at Le Perigord. (As luck would have it, the deal fell through and Bouterin remained at the restaurant for the next 12 years). And one trend forecaster noticed that diners were now requesting their steaks, chops, and roasts cooked rare to medium, so as not to obscure the natural flavors of the meat. Bruce Bozzi, owner of the Palm steakhouses remarked: "People are ordering their food less well done, especially on the East and West Coasts." 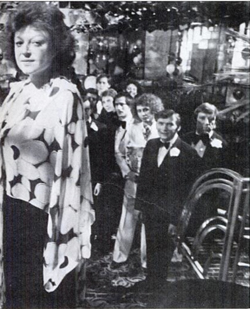 Month in Reviews: Times critic Mimi Sheraton spared no mercy in January. Of the seven restaurants she reviewed, three received single star ratings, and the rest got no stars. The one star recipients were: K.O.'s steakhouse The New Ballroom, and Nishi. The goose eggs were bestowed upon Kippy's Pier 44, Anche Vivolo, Elio's, and Regine's. Sheraton absolutely eviscerated this last restaurant. From the review:

Spoiled mussels and stale salmon were only two flaws at a lunch that included many. A mountain of soupy fettuccine with cream and ham tasted like a packaged macaroni-and-cheese dinner and a shrimp dish arrived in a lobster sauce that could have been achieved with canned lobster bisque. When we complained of slow service, an unshaven captain said: 'Well, madame, if you knew how to order properly from a captain instead of from waiters, perhaps you would get things promptly.'

For an extended blast from the past, check out the whole review — just a few months ago, Sheraton told Eater that Regine's was one of the all-time great shitshows of NYC. [Photo: Regina Sylberberg and the crew from Regine's via New York Magazine] 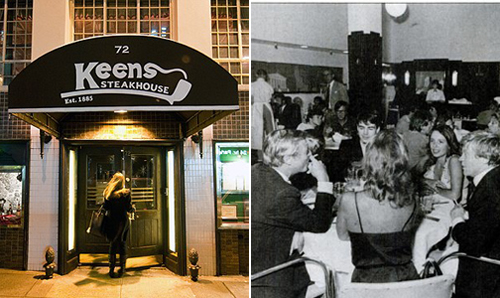 [The Odeon, back in the day, Keens]

The Times looked at the extensive renovation of then 80-year-old mutton palace Keens, which took three years to complete at a cost of $1.4 million. The team that took ownership of the famed Herald Square steakhouse had to enlarge the basement (from four to eight feet in height), remove six staircases, replace all the pipes, rewire the sprinkler system, add a boiler, update the kitchen appliances, create a laundry system, and clean and re-hang all of the restaurant's cherished memorabilia. New owner Kiki Kogelnik described her first impression of Keens: ''It looked like a castle in a fairy tale...There was snow on the roof and all over the building.'' To save money, Ms. Kogelnik also worked as the designer and contractor. [For more on the history of the restaurant, check out Eater's Living Legends piece from a few months back.]

And to kick off 1982, New York published its guide to singles bars and restaurants. The article lists Keith McNally's then two-year-old Tribeca restaurant The Odeon as the big singles spot: "The clientele is still largely made up of the exceedingly trendy — movie stars, designers, artists, and lounge lizards — but everyone looks more comfortable." The guide also recommends Elaine's, which was a huge A-lister hangout in 1982. The article notes that "If you get your self a decent table, you can have a wonderful time," and that "It helps if you wear black leather." Other popular singles spots listed in the article: Wings on Wooster, RedBar, Chinese Chance, and P.J. Clarke's.