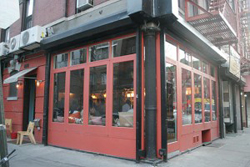 1) Lower East Side: Lower East Side American standby Little Giant has closed after over seven years in business. No word yet as to what will happen to the space and whether or not the owners are keeping it. UPDATE: Eater spoke to Little Giant/Tipsy Parson chef/restaurateur Julie Taras Wallach who says that the lease was up at the end of the year, and that the team decided to move on after a solid seven year run. As of now, there are no new projects planned for the space. [GS]

2) Staten Island: 30-year-old kosher restaurant Golden’s Deli closed earlier this week. The owners of the massive Springville delicatessen, which was famous for its matzo ball soup, hope to reopen somewhere else in the neighborhood. [SI Live]

3) Lower East Side: The Moldy Fig, a jazz club and restaurant on Stanton Street which opened a few months ago, has closed indefinitely. The club originally shuttered sometime in November when one of the owners fell ill, and this week the management announced on their Facebook page that the space would remain closed while the owner "recovers from his illness and hospitalization." [The Lo-Down]

4) Dumbo: Pete’s Downtown, an Italian restaurant that has been in business since the '80s, is now closed. The space is empty, and the neighbors hear that the landlord is looking for a high end restaurant to move in. [Dumbo NYC via GS]

5) Lower East Side: Bar 157, a watering hole in the old Blue Seats space on Ludlow, has been closed for over a week now and calls to the phone line go unanswered. [Bowery Boogie]