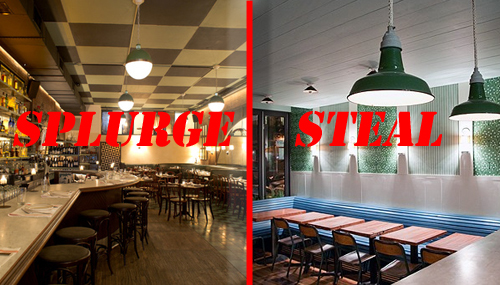 1) Acme/Northern Spy Food Co.: The recently revamped Acme is one of the hottest tickets in town right now, thanks to its chef, Noma-vet Mads Refslund. The place is packed most nights, but if you want a meal of inventive market-driven cuisine at a more relaxed price, head to Northern Spy Food Co., in Alphabet City. Like Mads, chef Hadley Schmitt also has a knack for pairing lightly-prepared proteins with grains, pickles, herbaceous sauces, and perfectly cooked eggs. The Northern Spy menu has more meat dishes than the one at Acme, but you can still order striped bass or squid and mussel ragout if you want a fish fix. At Acme, entrees range from $21-$30, and at Northern Spy many of the mains are about $20 or less — even with a drink, you can easily have a satisfying meal for under $40 per person. Also: Northern Spy serves delicious duck fat fries, which you won't find at Acme. [Photo; Photo] 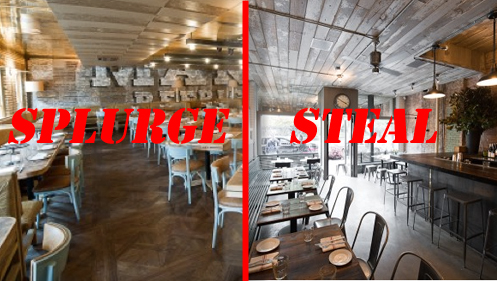 2) Catch/Whitehall: Catch is the EMM Group's sprawling new hot spot in the Meatpacking District with Top Chef alum Hung Huynh in the kitchen. The menu, which features a number of shareable seafood dishes, is surprisingly very good, so this is a big destination for Wall Street golden boys and the ladies who love them. But if you're looking for a chic place nearby with solid food and great drinks, head to Whitehall just a few blocks away on Greenwich Ave. This new gastropub from the Highlands team has a talented chef in the kitchen, Chris Rendel, formerly of Public and Double Crown, and the menu offers a number of interesting seafood dishes for much less than what you'll pay at Catch. Start with oysters, either raw or with a smoked bacon and Worcestershire dressing, and maybe an order of the crispy shell-on shrimp or pork-stuffed squid. To finish, get either the grilled mackerel or seam bream on the bone. There's no sushi on the menu here, but Whitehall serves a roast chicken to rival the fried version at Catch. Entrees run $18-$25 (at Catch, they're $26-$42), and the bar has a long drinks list with an emphasis on gin cocktails. [Photo, Photo] 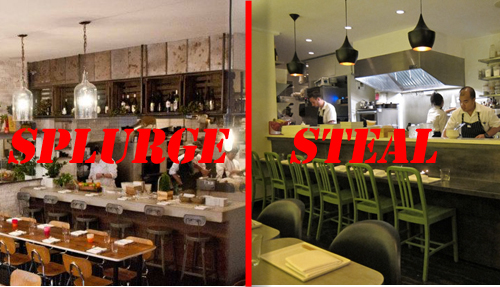 3) Wong/Family Recipe: At Simpson Wong's new restaurant on Cornelia Street, the chef is serving a highly personal style of Asian cuisine that the critics love so far. The menu features unusual dishes like scallops with crispy duck tongue, as well as hearty things like salt-baked pork shoulder and lobster egg foo young. It's not extremely pricey, but three courses can easily run you about $60 per person. For a much more affordable meal of inventive, non-traditional Asian cuisine, head to Family Recipe on the Lower East Side. Most of the dishes at this new restaurant from Nobu-vet Akiko Thurnauer have some sort of Japanese touchstone, but the preparations are frequently very original. Standouts include the oyster salad with pink peppercorn vinaigrette, the roasted brick chicken with XO sauce, and the pork belly buns with red shiso pesto. Many of the shareable plates are under $13, and there are several vegetarian items for around $10. [Photo; Photo] 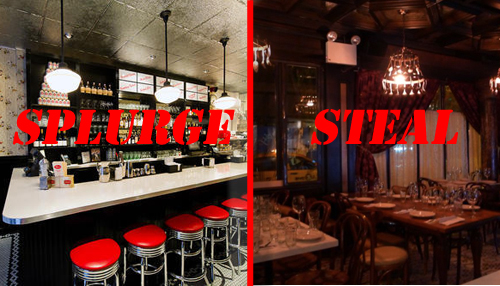 4) Parm/Sauce: Rich Torrisi and Mario Carbone's new Mulberry Street restaurant is easily one of the hottest restaurants in the city, right now. Although sandwiches are one of the main attractions here, at dinner you're going to want to try several of the sides and one of the $25 nightly specials, so a meal for two can easily cost more than $100. If that's too rich for your blood, check out Sauce, Frank Prisinzano's convivial new Italian restaurant on Rivington Street. The menu doesn't have clams, or any raw bar items for that matter, but there are a number of antipasti and contori to choose from, all priced $5 - $9, and the homemade pasta dishes are all about $7 each. Sauce also offers plenty of grilled and braised meat entrees (all the butchery is done in-house), and large format "family feasts" for $15 per person. These may lack some of the inventiveness of the nightly specials at Parm, but you get a lot of good food at a great price. [Photo; Photo] 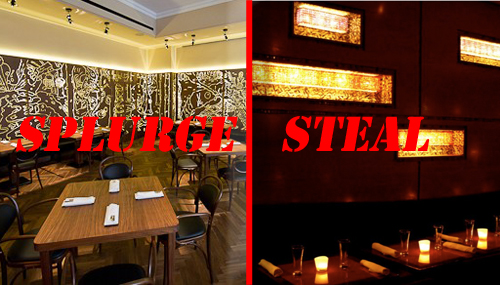 5) Hospoda/Bear: Hospoda is the new, well-reviewed Czech restaurant in the Bohemian National Hall. The menu features a number of modern updates on traditional recipes — country ham, for example, is served with a horseradish foam, and one of the star entrees is a "Beef Degustation" of wagyu, fillet, and tongue with pickled mushrooms. Small plates run $12 - $25, and a three-course tasting menu will cost you $48. But if you want to try creative European fare for much less, consider Bear in Long Island City. The kitchen here is manned by Natasha Pogrebinsky, who previously worked at Park Avenue Cafe. To start, you can order stewed mushrooms, winter ceviche, or marinated herring on fresh bread. To finish, try duck confit with apples and potatoes, chicken with pancetta, or the mushroom Stroganoff. Most appetizers are under $12, and many of the entrees are well under $20. [Photo, Photo]