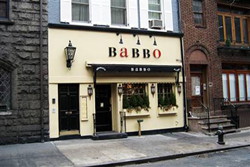 Italian food in New York has changed drastically over the last 15 years, but Babbo's hasn’t. A good portion of the menu has remained the same since the restaurant opened in 1998 and while Babbo’s signature dishes might not be quite as innovative and fresh as they were then, they stand as proof of Mario Batali’s influence on Italian food in New York.

It’s also true that the bar has been raised since Babbo was born. Michael White happened, for one. But there are half a dozen others that have been slowly pillaging Batali’s thunder. And after 10 years at the top of the Italian food chain in NYC, who can blame him for trading thunder for clear skies and cable TV?

That said, part of why Babbo is great is because it’s been bold enough to not fix what isn’t broken. It will no doubt prove timeless as a result.

On the wine front, what time (and money) buys is the rare ability—particularly in this economy—to buy wine for cellaring. Babbo still has one of the deepest collections of Italian wine in the country, and with more than 500 labels set aside for future decades, it’s one of few that will actually be able to sustain this kind of depth.

It’s as wide as it is deep. Currently the lists hovers around 1,300 selections. Aside from an oddly anemic collection of Brunello, it remains one of the country’s most complete Italian wine lists.

On a recent evening Babbo’s General Manager, Colum Sheehan, took me down to their new(ish)ly remodeled 1,500-square-foot cellar. We were reminiscing about the days when Roero Arneis didn’t cost $60 and Barolo was still one of the wine world’s best-kept secrets. For fans of Italian wine, the wounds resulting from being priced out of the market on everything from Barolo all the way down to Chianti are still fresh. Commiserating over it has become our favorite pastime.

Babbo’s wine list has been slower than others to reflect these rising prices, but the market seems to have finally caught up with them. On the high-end, prices have gone up, particularly in the Piedmont section where there aren’t nearly as many back vintage choices hovering around $100 than there were even three years ago. Many of those wines have either been pillaged or the prices hiked. For example, Ada Nada’s Barbaresco ‘Cichin’ was $100 in September 2009, now it’s $160. Even more striking: Aldo Conterno’s 1998 Granbussia, which was $350 in ’09, is now $600. There are other examples, but the point is not to blow the whistle on the restaurant. The prices are still standard, if not below standard, and there are a number of factors that could have contributed to prices going up. The point is: You simply can’t rob Babbo of Barolo quite like you used to.

That’s not say that there aren’t bargains to be had. The list is full of inexpensive oddities that have managed to elude the attention of diners for half a decade. There may be a suspect Trebbiano d’Molise that’s had five years in bottle, but you’ll also find a seven year-old bottle of greco di tufo—a still-underrated grape from Campania that actually ages quite beautifully—for $40. If you’re armed with an intimate knowledge of Italy’s regional wines, there isn’t a wine list I’m familiar with that offers more excitement.

Whether you have this knowledge or not, it’s best you seek the sommelier.

That guy is Alec Steidl, formerly of iTrulli, who joined Babbo as wine director in January 2011. He adds his name to a long list of wine directors—from David Lynch to Luca Pasquinelli—who have built up this list over the years. What Babbo’s collection has become in 14 years is a heritage list—a list that’s a collection of influences and preferences, rather than the work of one man. Steidl humbly sees himself more as a steward than a revolutionary, which is part of what makes Babbo’s wine program special. It’s one of the rare lists that’s truly driven by tradition, and it remains one of the city’s great treasures as a result.

Bang For Your Buck
Greco di Tufo Pietra Rosa Di Prisco 2005 $40
This is a great example of the sorts of inexpensive wines—with a touch—of age that are littered throughout the list. Greco di tufo happens to be one of Italy’s best-kept secrets. The wine hails from the cool Avellino region and in its youth is lean and mineral driven. With a little time in bottle it gains some weight while maintaining that mineral freshness. Think Chablis or pinot gris from Alsace with a few years in bottle.

“Teodor Riserva” Sim?i? 2007 Slovenia $65
Just over the border from Fruili, in Slovenia, there is a whole underworld of genius that’s been creeping into the American consciousness over the last several years. This blend of Friulano, Ribolla, and Pinot Grigio is raised in a combo of wood and stainless steel with extended skin maceration, courtesy of one of Slovenia’s best winemakers. Full-bodied and textured with a strong herbal component and a touch of oxidation.

“Sicilia Bianco” Il Cantante 2004 $75
Il Cantante is the Etna project of singer Mick Hucknall of Simply Red. Impossible as it may sound, it’s one of the best whites coming out of Etna. Made by the godfather of modern winemaking on Etna, Salvo Foti, via lo-fi methods. It’s a blend of Carricante, Minella Bianco, and Grecanico and is, aromatically, one of Italy’s most unique whites. Think saffron, wax, and mint. Not only does this show off the wine with a few years in bottle, it’s priced to move.

Colli Tortonesi Croatina Pertichetta Vigneti Massa 2005 $55
Vigneti Massa is located in the oft-overlooked Colli Tortonesi, a DOC in eastern Piedmont that runs from the Monferrato hills to the border with Lombardia. Massa’s white wine made from the Timorasso grape has made a splash here, but the reds are harder to find. This is 100% Croatina, a grape that’s typically used for blending throughout Piedmont, Lombardia, and the Veneto. This is aged for 22 months, 12 of them being in large barrels. Serious stuff for the price. Clean bright red fruit, funk, and minerals.

Barbera d’Alba Bricco Boschis-Cucolo Cavallotto 2007 $65
One of the Langhe’s best traditionally-minded producers proving just how serious Barbera can be. One of the great food-friendly Italian red wines. High in acid, bright and earthy.

Pallagrello Nero Terre del Volturno Vestini Campagnano 2006 $70
Vestini has been integral in resurrecting Campania’s indigenous varieties and bringing them back to form. This is all about dark fruit, earth and anise. Plays nice with heartier dishes.

Off The Beaten Track
Mayolet Di Barro 2008 $45
Mayolet is an obscure variety that is the result of a crossing of petit rouge and cornalin, two equally obscure varieties. It hails from the Valle d’Aosta in northwest Italy, along its border with Switzerland. Light, peppery, definitively alpine.

Under $40
“Bellis Perennis” Castello di Verduno 2008 PELAVERGA $35
Pelaverga is a grape that’s native to the Verduno province in Piedmont. When vinified red it’s floral, slightly herbal, and lean. Here it’s pressed off it’s skins and vinified white, making for one of the more unique sightings on the list.

Break The Bank
Champagne Extra Brut Les Vignes d’Autrefois Laherte 2004 $130
Great deal on Laherte’s funky 100% Pinot Meunier Extra Brut. This hails from a parcel near Epernay with soils made up of chalk and clay with vines that average around 50 years in age. Very minimal dosage (read: very dry). This should be drinking great right out of the bottle.

Etna Bianco Superiore Pietramarina Benanti 2000 $250
This is a beautiful wine that, with some age, is easily among Italy’s most intriguing whites. It’s 100% Carricante sourced from the east side of Mt. Etna. The vines average around 80 years old and come from a plot that’s so distinct, Pietramarina is the only white wine on Etna that can label itself ‘Etna Bianco Superiore’. Rich, floral, and mineral-driven.

Bovio Vigna Arborina 1999 $180
One of the best producers out of La Morra, a province in Piedmont known for its floral, delicate expression of nebbiolo. This is just now toeing the starting line of its marathon. Classic vintage, classic nebbiolo.

Boca Conti 1989 $150
A whole lot of wine you can get for the money. Boca is one of several provinces in the north of Piedmont that make up the region’s rich underworld. This is sourced from a vineyard made up of clay, limestone and sand with an elevation of around 1,500 feet above sea level. The family has made it a point to hold wines back in the cellar, amassing a library that’s been slowly leaked in this market. This is 70% nebbiolo with the remaining 30% split between croatina and uva rara, grapes that provide a little cushion for nebbiolo’s hard edges.

WTF?
The number of vintages of Sassicaia and Masseto alone nearly outnumbers the entire collection of Brunello. The Super Tuscans still have a captive country club audience and I’d guess they move pretty quickly, but at the expense of one of Italy’s great traditional wines?
[photo credit]