Well it finally happened. Le Baron finally opened the doors to its New York City outpost last night, and the nightlife world swooned. The club, owned by Andre Saraiva and Lionel Bensemoun, had been two years in the making, and after months of slowly watching a nondescript former Chinatown restaurant and bar transform itself into a multi-story, 70's era Saigon lounge, New York was on high alert when the club finally received a liquor license on New Year's Eve. The big night finally arrived last night, and though we warned you that the door would be exceptionally impossible (it was manned by a person in a bunny suit last night), it seems live everyone still headed down to Mulberry Street to try and join in on the fun. If you didn't make it inside, do check out what everyone had to say about it. 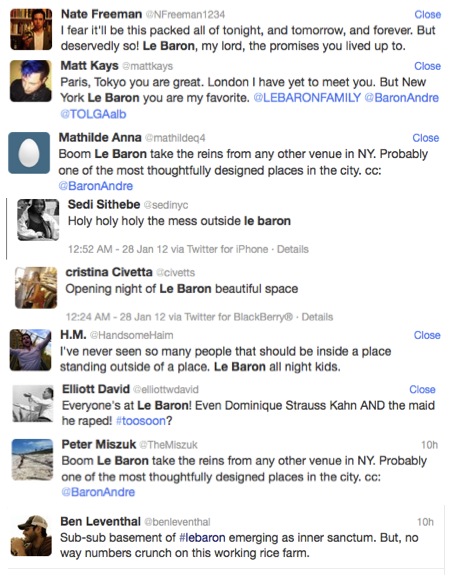 As you can see, the response was almost overwhelmingly glowing, except for folks like the Observer's Foster Kamer, who now knows what it's like to be rejected by a bunny from a nightclub. And why wouldn't it be? Opening night is always tremendous, attracting all of the friends and cool kids that are so happy to party with you. Now comes the hard slog of keeping it filled with the right crowd on a weekly basis to keep the bills paid, although no one really knows if these guys are in it for the money.
· Le Baron Coverage [~ENY~]
· Nightlife Coverage [~ENY~]