There are more than 6,000 bars in New York City. About 200 of them get regular press. This column is about the other ones. Robert Simonson, a journalist and blogger of the drinking life, and the originator of the "A Beer At..." column, takes a peek inside Gotham’s more anonymous watering holes, one by one. Follow him on Twitter. 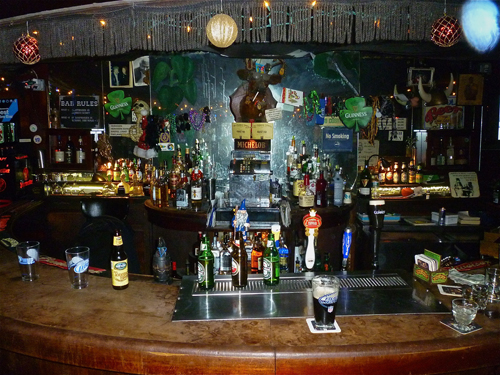 Amy Winehouse was the balladeer of choice to the raucous mourners at the Holiday Cocktail Lounge last night. She was played twice within a half hour of my taking a seat at the old, beaten, horseshoe bar.

"This is the best night of my life!" shouts the louche young woman a few stools down. It's the third time she's said it. "Can we smoke in here?" The bartender, Jeff, a sane, seen-it-all fellow, shakes his head. "What? Is the Health Department going to shut you down?!" yells the woman, laughing. "It's all over anyway."

What she means is the Holiday, a beloved dive on St. Mark's near First Avenue, will close its doors for good on January 28. The owner has sold the building, beer-seasoned floor, memories and all. Everyone is the low-ceilinged, basement bar knows it, and they've been drinking many toasts to the joint's health.

A slack-jawed young man so drunk he can no longer speak gestures Jeff over. He'd like another beer, and a shot. Shot of what? "The green bottle," he muttered. Jeff points to the bottle. "This?" he says, disbelieving. I look at the man, who is sitting next to me. "That's vermouth," I say. "I like vermouth," he mutters. Jeff pours. "I've never seen that," I say to Jeff. "Me neither." This puts me in the mood for a shot, so I order a Jameson. Jeff likes Jameson. He pours two and has one with me.

Back on the other side of the bar, there's an argument about who invented pizza, the Italians or the Chinese. "Putting shit on flat bread does not make it pizza!" one man argues. "Give me a cigarette before I put my tongue in this woman's mouth," says the louche young woman. People are too slow on the draw, and the women lock lips. Jeff smiles appreciatively. "You're a lucky man," he say to the louche woman's boyfriend. "I tell myself that every day," he answers.

A raven-haired a few stools down is telling the story of when she woke up to find "Holiday Cocktail Lounge" written on her forehead. "You fell asleep on the bar," said Jeff. "I told you if you did that again, I'd write HCL on your head. What I wanted to do was draw eyes on your eyelids."

Jeff seamlessly slips out and is replaced by a second bartender who seems to be as loaded as his customers. He loves the bar and is not happy about the sale. More Jamesons are poured out in sloppy rows and people snatch them up. "What the hell," says the bartender. "It's all over." People start to leave, each saying "See you tomorrow" as they do.

I take a last tour of the bar. The Christmas decorations are still up, lending a celebratory tinge to the sad reality that hangs in the air. The wooden phone booth still has a dial tone. The tables between the booths, lit by sconces that were perhaps once fancy, are covered with empty pint glasses. A flat-screen TV is on, but nobody is watching. On one wall is a print-out of a narrative by the Holiday's founder, Ukrainian immigrant, Steven Lutak. "Our bar counter is in the shape of a half circle," he said, "like the table at the United Nations. People from many countries meet here. Also their money goes farther here. The price of the drinks must be the lowest in Manhattan." Lutak started the Holiday in 1965. The space had been a bar since 1936, and, according to the unhappy bartender, was a speakeasy before that. Lutek died in 2009. His son sold the building for $4.2 million.

"For what?" a drinker next to me has asked earlier in the night. "What can you do with all that money? $4 million goes pretty fast. This building would make money every day!"

I look up from the narrative and the bar is empty. I'm the only one there. Through the open doorway, I see people scuffling on St. Mark's Street. The sparks of a butt skitter across the pavement. The bartender and other members of the U.N. have gotten into a full-fledged brawl. I step outside. The night is cool and damp. "What, are they five-year-olds?" asks a man watching from the sidewalk, the only barfly not fighting.

Every night at the Holiday should end with a street fight. Rest in peace, sweet dive.
— Robert Simonson