A lot of people come to Julian Medina's restaurants for Mexican staples like tacos, chips and guacamole, empanadas, and arroz con pollo. But the chef also runs a lot of less-traditional specials, to keep things interesting for the regulars. He frequently sketches these new creations, photocopies them, and passes them around to his crew, so that they can have a visual reference when he's not in the kitchen. Here's a look at a few sketches of dishes that just landed on the menu at Yerba Buena on Avenue A.

Julian Medina, Chef: "I wanted to do a little change on the menu, and use some ideas that I've been taking from a few trips I did to Mexico. I do arepas a lot, but I've been playing with them lately. I was just in the Yucatan Peninsula, back in Mexico, and I saw a cochinita pibil torta, and I thought that it would be perfect for an arepa-kind-of-thing. So, that's braised pork with achiote, the habanero, and the pickled red onions. Obviously the most important thing is the filling — it has to be tasty and flavorful in one bite. But with the arepa, I wanted the texture to be not too crispy, but tough enough and crisp enough on the outside. And then the pickled onions cut the richness of the pork. 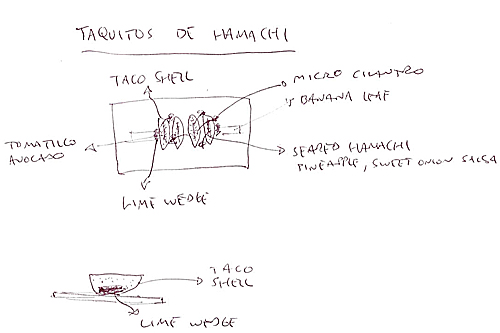 "I actually did this once before with a different presentation. These are hamachi taquitos. These are al pastor, which is the Mexican style with the pineapple, onions, cilantro, and a little spice. It's supposed to look nice and beautiful, because you eat with your eyes sometimes. This is great because a lot of girls come and they don't want big food, and this is prefect — it's not too heavy, it's nice and light. 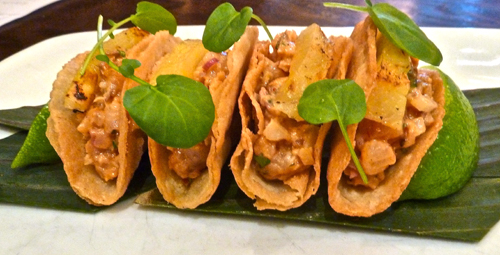 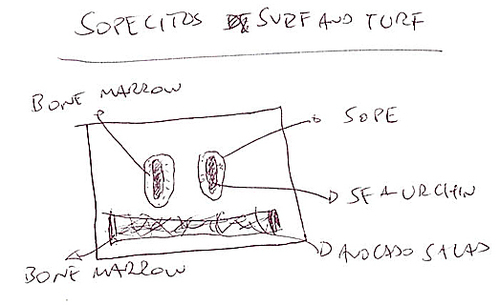 "This is like a bone marrow guacamole with sea urchin, tomatillo and avocado salsa, sopes, and a little extra bit of the bone marrow, too. I think this is a very fun dish. I don't know if people will like it or not, but if I saw it on the menu, I would totally order it. Sea urchin and bone marrow — I'm on it."