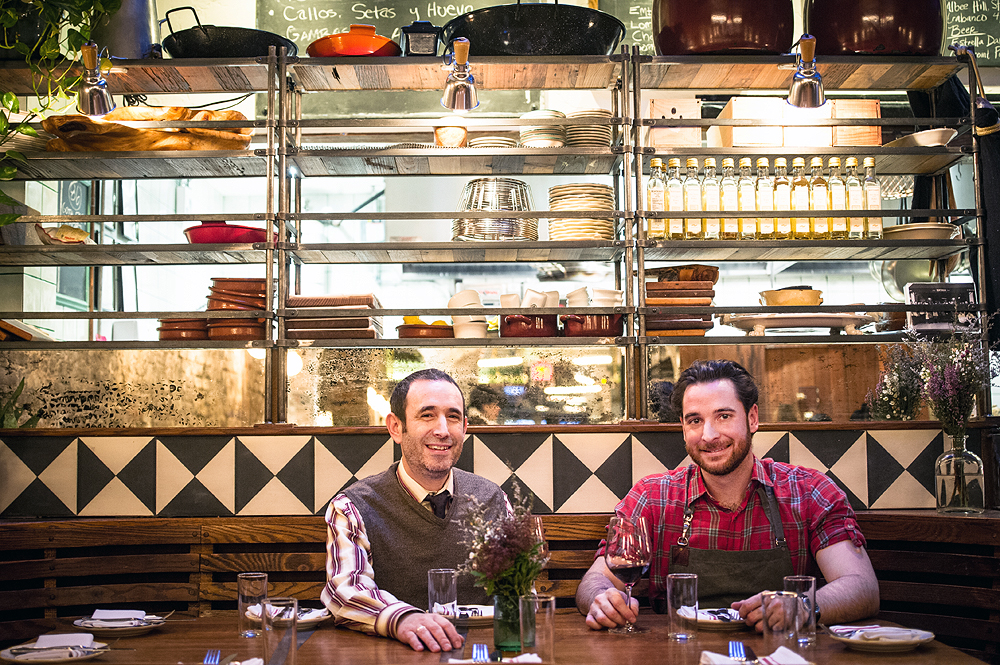 If you go to Seamus Mullen's six-month-old Spanish restaurant Tertulia any night after 6:30 PM, there will probably be some kind of wait — it could be ten minutes, or it could be three hours. Service Director Gil Avital and Bar Manager Nick Africano have been at Tertulia since day one, and they've helped this project come together and grow into something really big. We recently chatted with Gil and Nick about the crowds, the critics, and the early success of Tertulia.

Gil Avital, Partner/Service and Beverage Director: We worked together at Boqueria. That's how we met. Then when this project came around, it was pretty clear from day one who was going to be here. Nick Africano, Floor Manager/Bar Manager: Gil asked me to be a part of this before we actually opened. I haven't worked for any other management in New York City, really. My fourth day living in New York, I was hired at Boqueria by Gil.

What do you say to someone when the wait is three hours? NA: That's one of the hardest things to field. I think the best answer is to be as clear as you can without being impolite, and to be as hospitable as possible. You might have to say, "We're full at the moment." GA: We rarely have to do that, and we try and keep everyone in here, and accommodate everyone that comes through the door. Most of the time, people are willing to hang around or have a drink and comeback, and we'll seat them. There haven't been any occasions yet where we've had to say, "Okay, we can't take any more." But, you know, we work hard with the host staff to be hospitable. And if someone doesn't want to wait, we say, "Hey, do you want to come back on Sunday or Monday? It's much easier to get in." We also made these cards that we give people — it's the Tertulia card with the phone number and everything, and the backside says, "Bring it in and you'll get something effing tasty." And if someone decides not to wait, we hand those out. The next time they come in, they hand in the card and they get something from us. It's a way of saying, "Hey, thanks for coming back."

What is the best time to come in for dinner during the week if you don't want to wait? GA: I think 5:30 PM and 6:30 PM on Sunday and Monday is pretty easy. I also feel like the beginning of the week is good, after 10 PM. NA: The kitchen stays open until 11:30 PM.

Who are your VIPs here? NA: The neighborhood clientele is very important to us, and people who live down the corner or around the street are coming back a lot. We do our best to recognize them and say, "Hey, good to see you again," and treat them very well. GA: When you open a restaurant and get so much press, you get everyone. You get industry, you media, you get food critics... there was a very famous story with Jay-Z and Beyonce and all that, which is great. But, as a matter of fact, those people move on. They will be here now, but then the next hot restaurant opens, and they go there. They might be back, but what makes restaurants live long is the neighborhood. If you don't have the people who come once or twice a week, sometimes for lunch or for a drink at the bar, then it just goes away after the initial high. You need to be good to your neighborhood people. GA: I also think it's becoming more common to see chefs and industry people come back. Not just come once, but come again and brings friends, and that's exciting. So, those guests are really important to us.

It sounds like you guys have only gotten busier as the reviews have come out. GA: Yes, after the reviews, we got really busy. And then at the end of the year, when we got on Sifton's list and Adam Platt's list, we got a big push. NA: We got a big push from the New Yorker review. GA: We talk with the staff about this every single night, about how this is the big pressure, because the reviews can get people to come, but now you have to actually maintain and stand up to all the good press. And everyone reads a blog nowadays, so you got to make sure that you make people happy, maintain your standards, and keep it going.

Sifton's review mentioned a few service hiccups, like a waiter who spilled some wine. Did you tweak the service at all after that review? GA: Well, there's a few things about that. First of all, in the world that we live in today...very few people know how difficult it is to open a restaurant. There are so many things to figure out. We did a very intense training the whole week, from morning to night, and we thought about a lot of things. But then you gotta start working in the space to work out the kinks, and there are always kinks to work out. And no matter how much experience you have, there's still a lot to work out. The New York Times used to wait like six months, but they can't afford it anymore, because if they're not going to pick that up immediately, and allow the bloggers to review it first, then they're in trouble. They're losing the game.

The second things is, when Sifton was here for the first time, we recognized him right away, which is not hard, and then we got really nervous. Everyone from the chef, to the management, all the way down to the server who was serving him. And the server was a little shaky, and as they were serving him, a glass of wine was pushed and there was no spill on him, but it spilled on the table. People get nervous around reviewers. I think it's only natural.

Are we doing a better job today than day one or month one? Of course. Everyone moves through the space in a much more confident way, we know where things are, and we don't have to think about it. But it takes time in the beginning, and people don't cut you any slack — they want you to be on top.

Did you ever imagine that the restaurant would be this popular six months in? NA: I thought it would be successful, but I'm surprised every day by how consistent the business is. GA: We knew it would be successful, because people were waiting for the chef to do things. Once they heard he left Boqueria, they were waiting for, "Okay, what's going to be the next step?" He was on the Next Iron Chef, he was recognizable, and people were like, "Well, where did he go? What is he going to do next?" So, we knew that people were going to come and check it out immediately. What surprised me is what we just talked about — that people are willing to wait two and half hours for a table. It's admirable. The hostess tells them about the wait, and they say "Okay," and have a drink. NA: I was very anxious and excited to work with Seamus again, and I expected the food to be very good. But when we all sat down and tasted the dishes for ourselves, before we opened for the public, we all kind of said, "It's good to have you back, man." I think Seamus is at the top of his game in terms of the food.

What's the strangest request that you've accommodated so far? NA: I can't think of anything super strange.

So, it sounds like people are pretty much game to go along with the experience. GA: Pretty much, you know. The food we serve here, there's no compromises. There's no "Oh, let me just adjust that to the American palate." I mean, the chef is cooking what he wants to cook. When something needs to be spicy, it's spicy. One of the dishes that became a signature dish is the arroz a la plancha, which has snails in it. And in the beginning, it was like, "You know, snails...we are in America. How are people going to react to that?" It's become one of the most popular dishes. I hope that this is going to continue and that we can keep the interest of people that are willing to try things, and not lose that and just become patatas and the simple tapas that people are used to.

What's your most important tool for working the room? NA: At the bar, it's definitely my wine key. That's irreplaceable. But I think, and I've learned this from Gil, my most important item is to maintain a sense of composure on the floor and lead by example — if something needs to be done, you need to not only help someone learn how to do it, but do it yourself, as well. And I think Gil has done an amazing job of teaching the management how to maintain a sense of composure. GA: Yeah, my belief has always been that managers need to be hands-on. The most important job that a manager has is to make sure that the bartenders, the servers, and the backwaiters have all the tools and support that they need to do their jobs well. You need to have their back. They need to know that if they come to you, you're there. And that can mean helping them open a table, pour water, bus a table, or recommend a wine. But when it comes to tools, my most important tool is my collection of vests that I have.

What's the status on the aprons? Are customers going to be able to buy them soon? GA: Yes, I mean, that's a possibility. The chef and Craig Robinson, who's the designer, they're working on some sort of a line. Not our aprons, we're not selling ours. They're coming up with something else.

When you're not at the restaurant, where do you like to eat? GA: I had a great dinner last night at Minetta Tavern, I love that place. Now, since we opened Tertulia, I don't have many days off, so I tend to eat in my neighborhood, in Harlem. I had brunch at Red Rooster on Sunday. There's a good beer garden called Bier. I love that place — great burger and an international beer selection.
NA: It's Blue Ribbon for me. They serve food until 2 AM, and they're incredibly hospitable.

What are the best things to eat and drink here? NA: The wine on tap is excellent, and the cider on tap. GA: I would say check the blackboards. That's the stuff that we get only today, that we're maybe going to have only a week. The menu's great and we change it seasonally, maybe according to what's in the market. But last night, we just did ruby red shrimp. They're in season now, they're fresh, and we're not going to use frozen shrimp for that. NA: Or the lightly smoked and grilled foie gras. That was a hit last night.

· All Coverage of Tertulia [~ENY~]
· All Editions of The Gatekeepers [~ENY~]